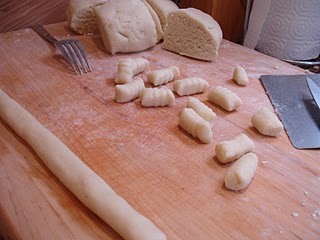 So the Big Eating Day is finally over and I have no turkey post for you. Not that I didn’t have turkey- I had plenty of it plus oyster stuffing (my absolute favorite!), sausage stuffing, corn, watercress salad, cranberry sauce, mashed potatoes, uni mousse and pumpkin pie at my parents house. All of it was delicious, but I’ll leave the posting of that to my sis since she took photos and all that. 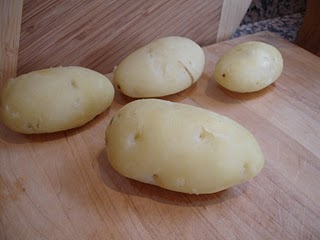 This post is somewhat Thanksgiving related. You see, my parents bought a 10 pound bag of potatoes with which to make mashed potatoes for Thanksgiving, but of course 10pounds was about 8 pounds more than we needed. So, in addition to the usual turkey/stuffing packs that they send home with us, they also added a few potatoes to each parting gift. It’s strange- as much as I love potatoes, I rarely buy them. Maybe it was the whole carb thing that scared me off of them for awhile…..well wait, I still eat loads of bread so that can’t be it…but for some reason they don’t find their way into my kitchen often. I stared at the little suckers and wondered what to do. 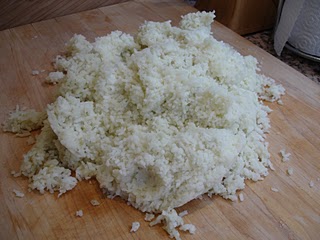 Then it hit me. Gnocchi! I’d been meaning to try my hand at the small dumpling-like knobs of dough for awhile, but I’d also been a bit fearful. I’d heard so many tales of how overworking the dough resulted in tough erasers or how not kneading the dough enough resulted in the gnocchi falling apart in the boiling water. I set my fears aside and opened up my trusty Mario Batali cookbook. It seemed easy enough- potatoes, check. Egg, check. Flour, check. I boiled my potatoes and got to work. 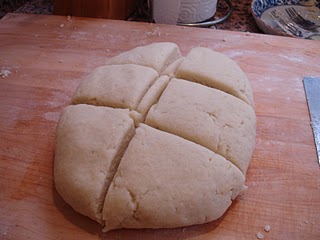 The skins came off easily from the still-hot potatoes and I ran them through my food mill which resulted in a big pile of fluffiness. After a liberal sprinkle of flour and one egg and a bit of salt, I worked the mass with a fork until it came together. I continued to knead it with my hands for only four minutes, as the recipe said, and it ended up in a nice ball- still a bit tacky but not at all sticky. 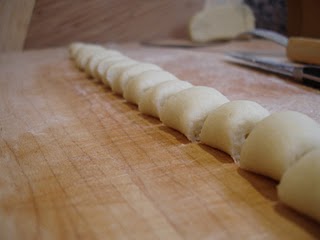 Now the time consuming part began. After dividing the dough into six sections, I realized that I needed to divide it even more in order to easily roll each into a one-inch rope that would still fit on my cutting board. For the next hour or so, I rolled, cut, rolled over tongs of a fork, placed on a cookie sheet and then boiled a batch for one minute, dumped the gnocchi into an ice bath and did it all over again about four times. It did take some patience but I got the hang of it after awhile, and I was pleased to see that the cooled gnocchi did not stick together at all. Mario’s recipe calls for you to toss the finished gnocchi in 1/2 cup of oil in order to store it, but I skipped that step entirely since it was unnecessary and I didn’t want my gnocchi coated with oil. 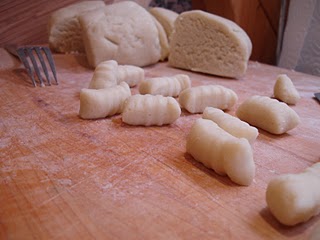 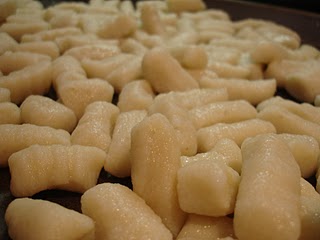 The recipe made a LOT of gnocchi so I bagged a couple of batches into ziploc bags and froze them. Then I took my portion, boiled it in salted water until they floated to the surface and tossed them in homemade marinara mixed with chicken sausage and eggplant. A sprinkle of parmesan later and dinner was served.

How were they? TOTALLY worth the effort!! It’s true what they say- homemade gnocchi are as light as air if done right and these were fluffy and tender. Each was like a potato pillow and would be delicious tossed with just a bit of browned butter and pecorino, as well as a heartier tomato sauce or pesto. I would definitely make these again, and it’s a good thing that one recipe makes so many of them. Mario himself stated that you could make any old weeknight meal special by whipping out a batch of these homemade gnocchi, and he’s right. I’m looking forward to eating them again and again. 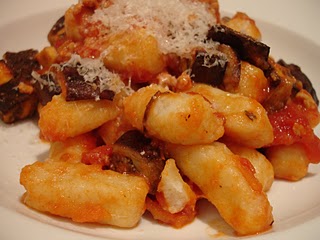