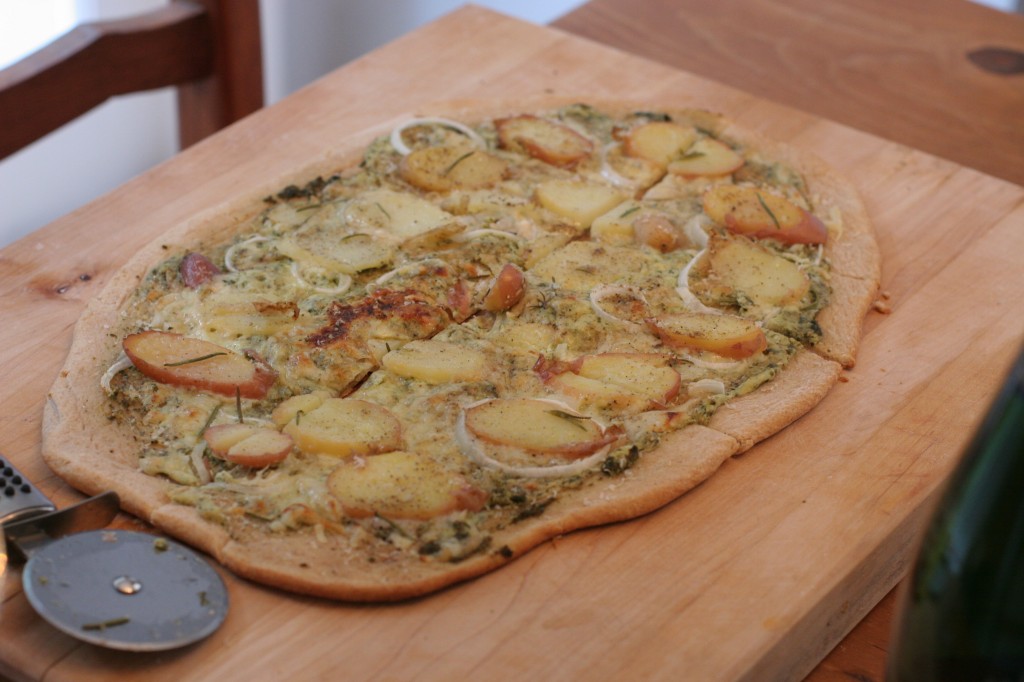 Happy Tuesday everyone (wait, are Tuesdays happy?  I guess it doesn’t have the same ring as “TGIF!”)! I have quite a bit to do today but I wanted to post a quick update on a meal I whipped up for my family last week.  Not unusually, I found myself inspired once again by the bounty at the Farmer’s Market (this time in Santa Monica) so I let the beautiful produce be the star of the show. 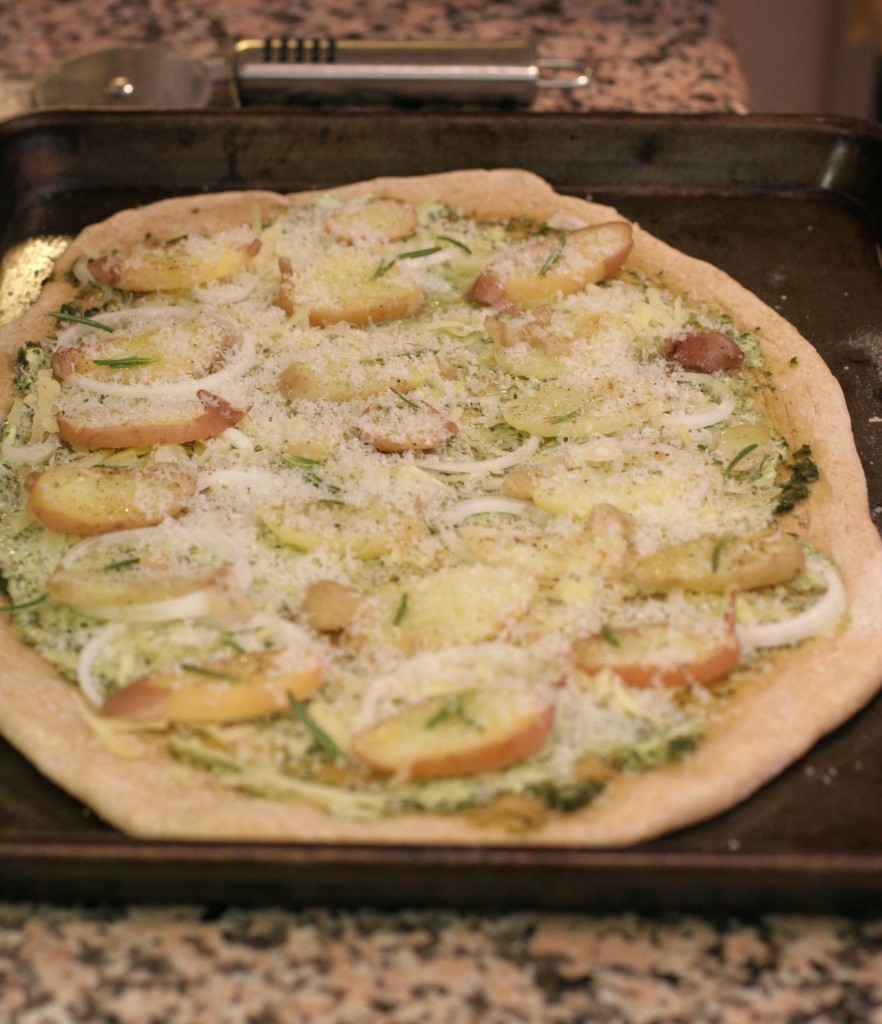 There have been some incredible baby fingerling potatoes at the markets lately, and they come in a variety of pretty colors.  I picked up some pink ones but you can’t really see the colors in these photos, unfortunately.  I bet some of you are thinking, “potato pizza??” but let me assure you that the creaminess of these fingerlings go so well with a crispy, whole-wheat crust, and all it needs is a smear of herbed cream cheese and a grating of sharp parmesan to bring it all together.  A drizzle of homemade pesto and some fresh rosemary never hurt anything either:). It’s a carb-lovers dream come true, I tell ya! 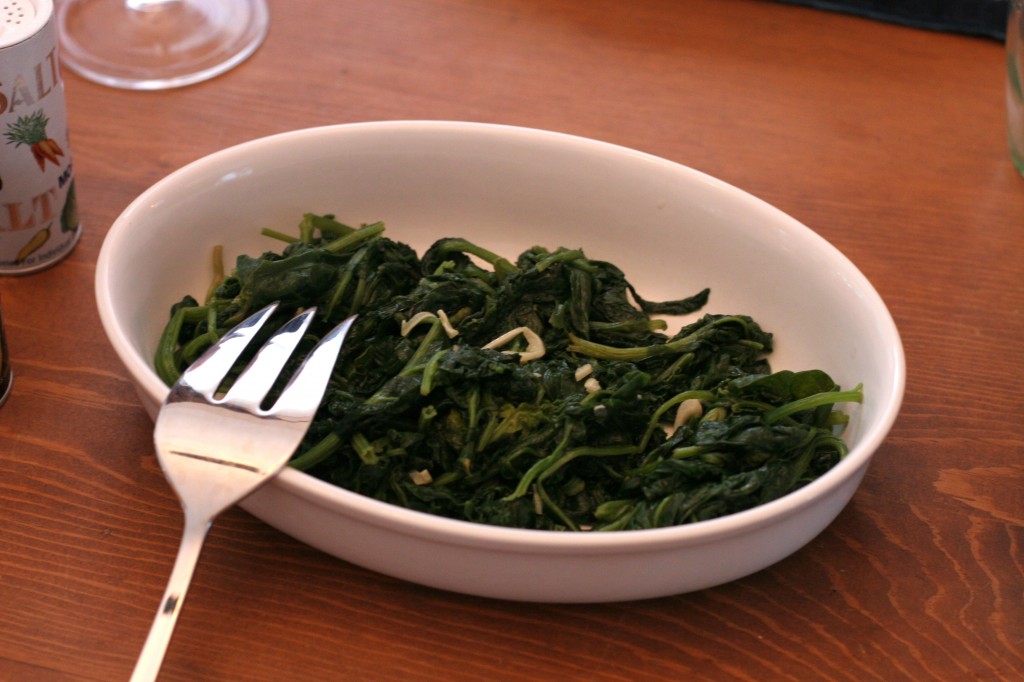 Beautiful sweet mini-peppers stuffed with jalapeno/cilantro chicken sausage and roasted- such a simple dish but SO good! 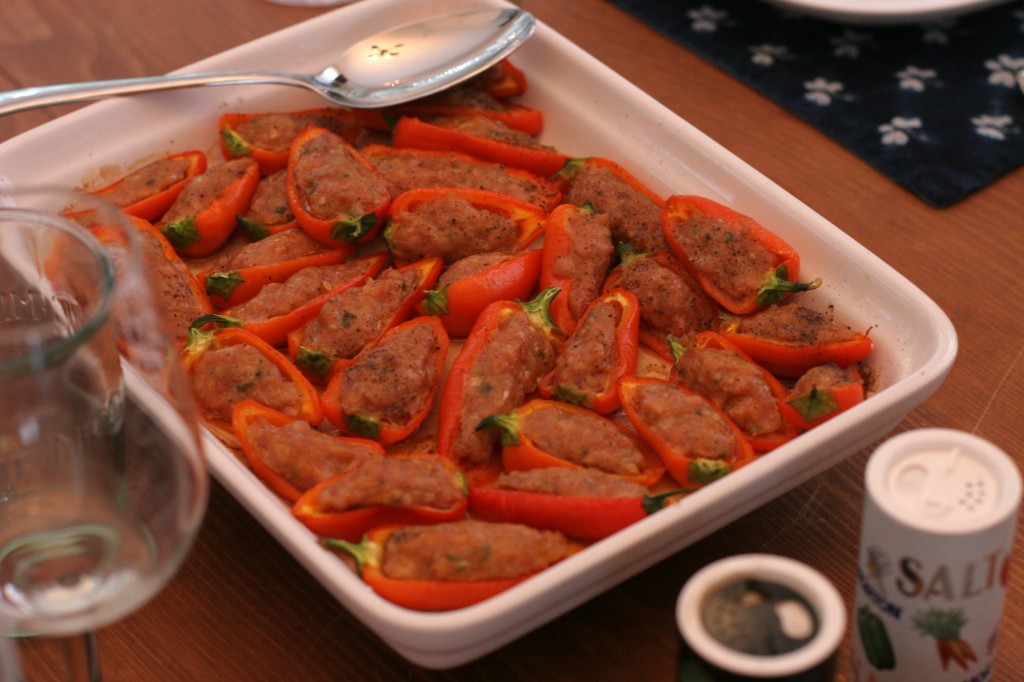 What’s been your favorite Farmer’s Market purchase this season? 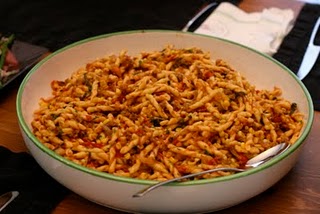 Do you ever hit a road block when you’re trying to figure out what to make for dinner?  It happens to me on weeknights here and there, but it hardly ever happens when I know in advance that people are coming over.  In fact, I get really excited about the prospect of cooking for others and have so many recipes I want to make that I have to reign it in.  Yesterday, however, was totally different.  I must have flipped through 15 or so cookbooks, spent a good hour on Foodgawker, yet nothing grabbed me.  We finally decided to hit the Pasadena Farmer’s Market and hoped inspiration would hit while we checked out the produce.

END_OF_DOCUMENT_TOKEN_TO_BE_REPLACED 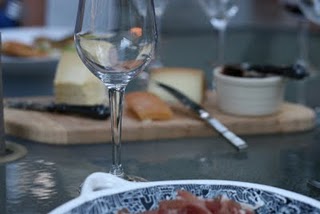 As I mentioned in my last post, we had some friends over for a summer dinner party a couple of weekends ago. For once, I didn’t really have much of a plan and let the Farmer’s Market guide my menu. It turned out to be one of my favorite menus and just really fun to put together. 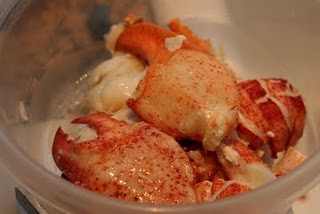 One thing I had decided was that I wanted to make a side dish with lobster. Since there were six people total for the dinner party I figured it best to not attempt a main course of lobster as to not break the bank; plus it’s a bit of work to get the meat out of the shells. After boiling the two Maine lobsters and extracting the meat, I decided on a salad of butter lettuce, cherry tomatoes, freshly cut corn off the cob and the lobster with a creamy tarragon dressing. You know when you’re thinking of what to make and a dish just sort of comes to you instantly? This salad was like that and I just knew all of those components would work well together. Some fresh chives finished off the dish: 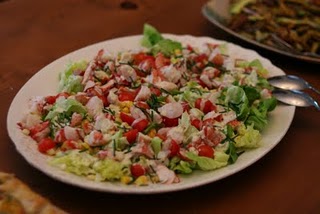 The main course was a variation on the many savory tarts I’ve made in the past. I used what has become my absolute favorite tart crust recipe (it is seriously a JOY to handle and roll out) and made a crème fraiche/egg yolk/cheese paste to spread (similar to the one Suzanne Goin uses in her savory tarts in her Lucques cookbook) on the dough……. 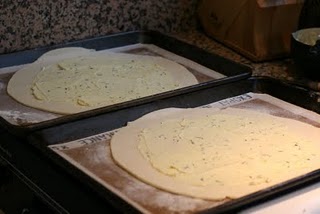 …….before topping that with sliced gruyere, different verities of heirloom tomatoes, grated parmesan and a good sprinkling of black pepper. I love this base which can be made with ricotta, sour crème, grated cheese, whatever- just spread it on your dough and top with anything from bacon to mushrooms to leeks to tomatoes, like I did here: 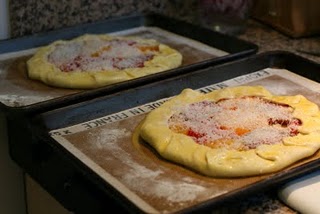 I did sprinkle the sliced tomatoes with sea salt and let them drain between two paper towels for about 20 minutes before arranging them onto the unbaked tart dough so that the water in them wouldn’t make the tart soggy. It worked very well and helped concentrate the flavor of the tomatoes once they baked: 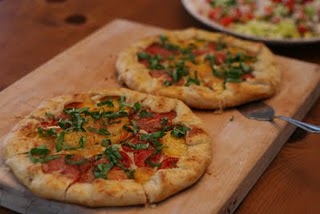 Initially I thought to do a zucchini or other type of summer squash as a second side dish, but to be honest, I’m not the biggest fan of either as they tend to be watery. Luckily I saw some gorgeous, multicolored carrots which I roasted with olive oil, salt and pepper, then tossed with sliced avocado, red onion and a vinaigrette of red wine vinegar, cumin, olive oil, agave nectar and lots of chopped cilantro: 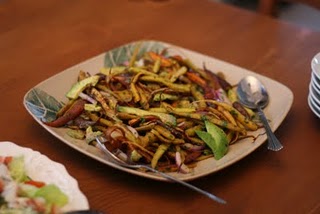 Those of you who frequent Southern California farmers markets have probably seen the overabundance of big, juicy strawberries this summer- they are everywhere- so I picked up a bunch before figuring out what I was going to make. I’d purchased these really cute milk glasses at Anthropologie awhile ago and was inspired to make a vanilla bean panna cotta topped with the strawberries which I macerated in a bit of agave nectar and this amazing blackberry balsamic vinegar which I bought at Nicole’s: 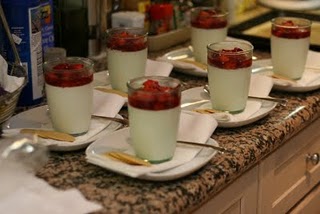 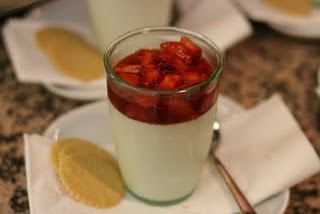 A cheese plate and some prosciutto finished off the light menu and we had a great time sipping rose and catching up in the back yard. I hadn’t cooked for a group in awhile and it was like the shot in the arm I needed to get back in the kitchen. I love to cook, but when a menu comes together without recipes, based on inspiration gained from the local produce and ideas gained from years of cooking, it restores your faith in cooking, ha! I had as much fun cooking this as I did eating it and look forward to at least a couple more summer dinner parties before Autumn comes! 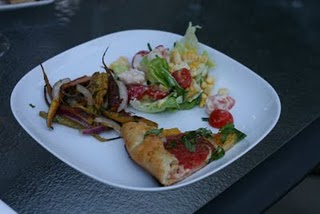 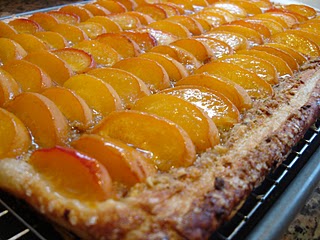 This is a great time of year to hit a Farmer’s Market as we creep into summer and all of the fruits of the season start showing their glorious colors. This past Sunday we decided to go to the Montrose market for the first time, and were pleasantly surprised at all of the produce and food offerings it presented. Racks of bbq rotisserie chicken sat alongside piles of bing cherries (SO SWEET!) and thick masses of kale while kids took turns taking rides on the miniature ponies. 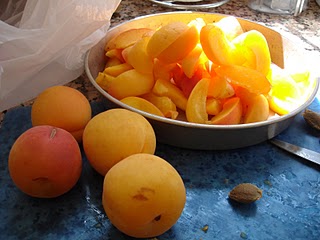 Almost immediately, I spotted the large mound of fresh apricots on one table and started grabbing. Although I’m not nuts about eating the fruit on its own, I love making desserts with them. Apricot jam is another favorite. Anyway, since they have such a short season, I had to get some before the window closed for another year. 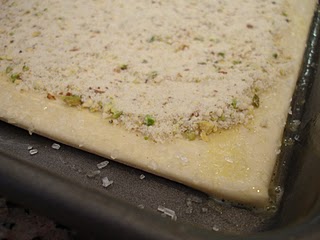 When I got home, I checked around and found this simple recipe which was perfect since I had a sheet of puff pastry in the freezer and bags of almonds in the pantry. I veered from the recipe slightly and used both pistachios and almonds in the sugar/nut mixture, and used regular granulated sugar instead of confectioner’s since I didn’t have any. I loved that the recipe made the fruit the star and didn’t have a lot of filler. 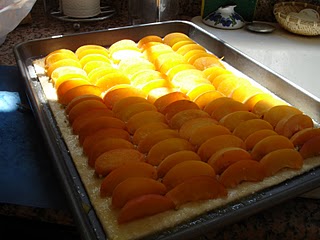 Ready for the oven…….

The galette was a cinch to put together- blitz some nuts and sugar in the Cuisinart and sprinkle on the puff pastry, place sliced fruit on top of sugar mixture, brush some egg wash around the rim, sprinkle the top with additional sugar and bake. Seriously- you could use any stone fruit in this and it’d be fantastic. In fact, I have over a hundred plums on my tree that will be making an appearance in another version of this when they’re ripe. I brushed the cooled tart with some melted apricot jam to give it a nice shine, and it was done. I think a scoop of some good, vanilla gelato would make it even better! 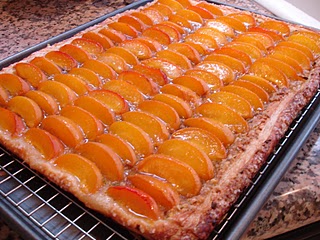 If you haven’t made it out to a Farmer’s Market lately, check out all of the mouth-watering choices that are available this time of year. To find a market near you, just check out this site.