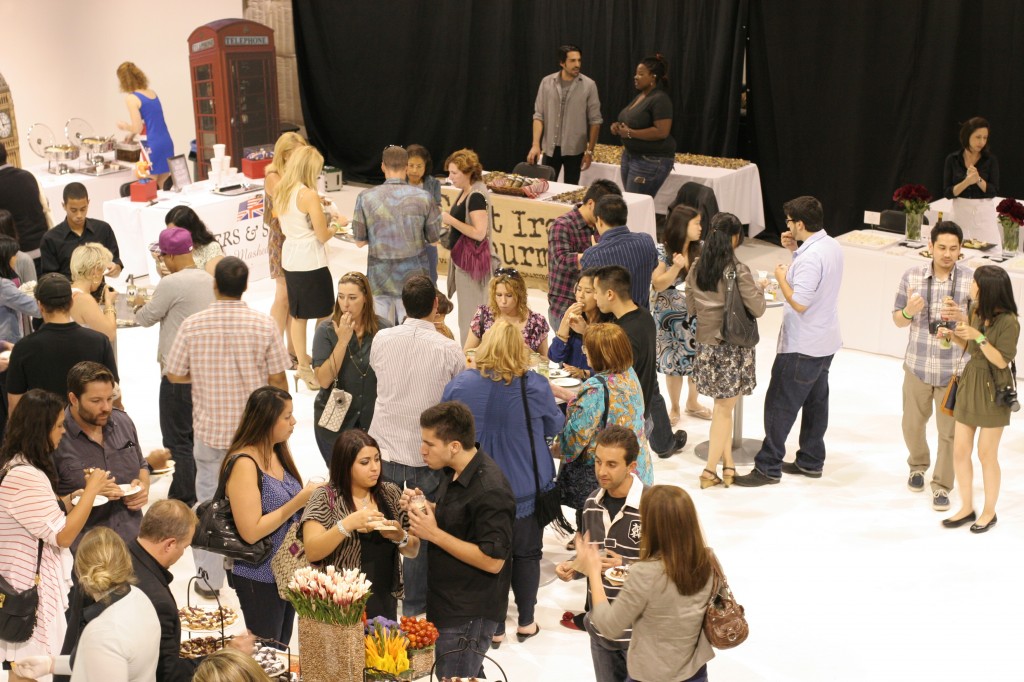 As a food blogger, I get invited to try restaurants or attend food events once in awhile.  Sometimes I’ll go and many times I won’t, depending on whether I’m interested in it or not.  Pretty simple.  Anytime I am comped a meal or an event ticket, I’ll always say so on this blog- I feel it’s appropriate, and I also want to mention that I won’t ever lie about an experience anywhere- free or not.  After all, food is the reason I do this- GOOD FOOD- and as someone who has a deep respect for and love of the stuff I can’t very well be swayed into saying something over a few saved dollars.  It just ain’t right! END_OF_DOCUMENT_TOKEN_TO_BE_REPLACED 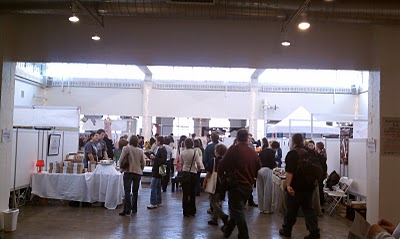 Over the weekend, I got a chance to check out Artisanal LA, a 2-day showcase of local bakers, chocolatiers, chefs and other food artisans held at the Cooper Building in Downtown L.A. It was nice to go to a food event that was extremely inexpensive ($10 tickets, if purchased in advance) where you actually get to speak at length with the people behind the yummy food, all of which were being sampled. Uh, sign me up! 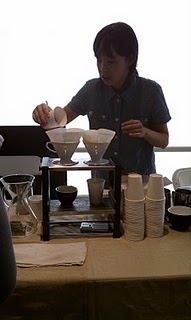 The airy, well-lit loft space was well organized, and my parents and I decided to tackle the event from one end to the next. We immediately were drawn to these beautiful baguettes from Homeboy Industries (me + bread = happy) and almost gave into the smell of tacos coming from their flattop but we resisted since we had to save room for all of the other goodies being dished out. I was glad to see Homeboy Industries represented, and got a chance to congratulate them on the upcoming restaurant in LAX that will in the near future. The person I spoke with said that although they are happy about having an income source for the struggling company, the location (in an international airport) prohibits ex-felons from working there…which kind of defeats the purpose of having a Homeboy Industries restaurant, since the mission of the company is to help ex-convicts to get back into the work force. It’s unfortunate, and I hope the company will be able to open up additional businesses that can actually employ they people that they are helping. 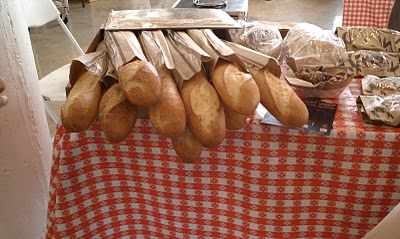 As we walked around, our eyes darted from cupcakes to pies to salsas, cheese and crackers; I was in foodie heaven and tried my best to sample everything. One particularly gorgeous display was put on by Compartes Chocolatier. I mean, they are almost too pretty to eat: 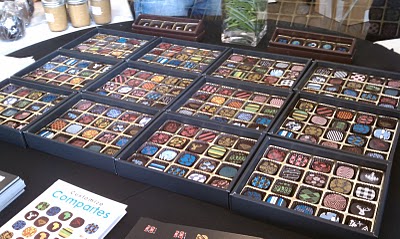 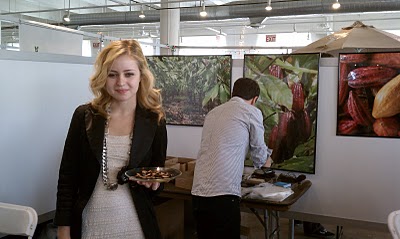 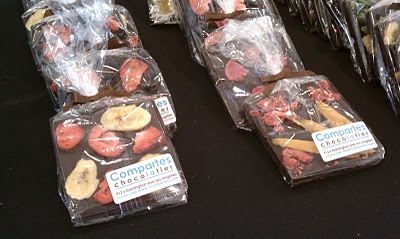 Ok, ALMOST. I got to sample a honey-peanut-butter filled dark chocolate and it was insanely delicious. The filling tasted like real, natural peanut butter and wasn’t too sugary or sweet- a perfect partner to the smooth, dark chocolate. I made a mental note to myself that next time I needed to give one of my sweet-tooth friends a gift, I’d head over to the Compartes shop over in Brentwood. 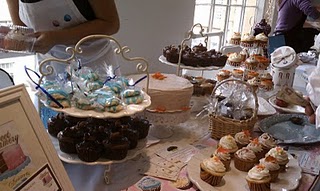 Much of the food offerings were of the sweet variety, but there were a few savory items, such as Yuichiro Sato’s meat pies. Sato won Best In Show at KCRW’s Second Annual Good Food Pie Contest which I’d read about in the LA Weekly, so I was happy to see he’d set up a booth and I got to try the rich meat pie. It was really tasty- kind of like a pot pie with a shepherd’s pie filling. Although Sato has yet to open up a shop, I’m sure there is one in his near future since his product is a really good one. 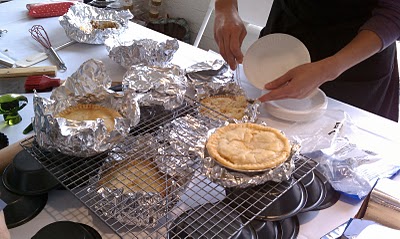 Cast Iron Gourmet, I was getting pretty full. I did purchase a bottle of spicy anticucho from Chef Ricardo Zarate of Mo Chica and Test Kitchen (which I used on last night’s shrimp tacos), plus a large jar of Hell Fire pepper jelly from Jenkins Jellies. I remember a few years back I went to a friend’s BBQ, and someone offered me some neon green jelly and cream cheese on a cracker, and although the color alarmed me, I still remember how the sweet/spicy jalapeno and smooth cream cheese was a match made in heaven. Luckily Jenkins Jellies version of pepper jelly is all natural, so it doesn’t resemble some scary green Jell-O. I think I may just plop a brick of cream cheese onto a plate, dump half the jar of the Hell Fire jelly on top, bust out a box of crackers, lock the door, draw the curtains and go to town!

Between the bites of cheese, chunks of brownie, pieces of cupcake and a ridiculously good snack of trail mix and candied, thick cut bacon called “Couch Mix” from the evil minds at 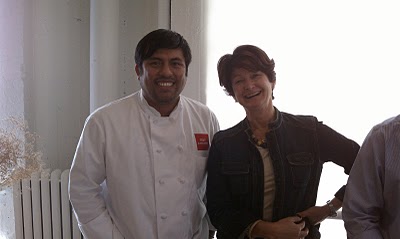 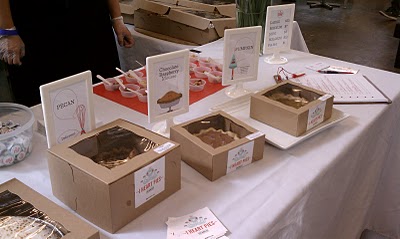 I hope there are many more events like Artisanal LA, and I look forward to attending again next year. 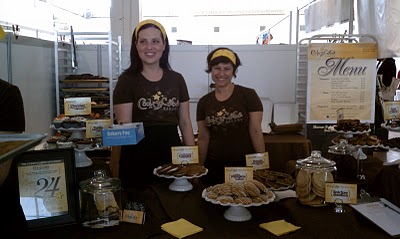 Did any of you attend? What was your favorite local food item??Chef Ricardo Zarate

Best Food-related TV Show Ever: After Hours With Daniel

I recently (finally) got TiVo, and I can finally record shows and watch them later. There’s nothing quite as satisfying as having a full queue when you get home after a long day- a queue filled with shows I actually want to watch, that is. Having the ability to record various programs automatically has also given me a chance to watch a bunch of shows I didn’t even really know existed. You can set the recorder based on show topics or titles, so it’s really opened up a new world or TV for me. And that’s saying a lot since a big part of my job is to watch a lot of TV!

Ok, enough about my love for TiVo but it just introduced me to my new favorite show ever- After Hours with Daniel on MOJO. I’d never even heard of the network before, but of course I had heard of the world famous chef, Daniel Boulud. Owner and chef of multiple restaurants (most famously the Michelin two-star Daniel) and culinary icon, Daniel Boulud apparently has had a tradition of having late night suppers with other chefs and luminaries. MOJO has turned these dinners into a series- each episode is a different dinner at a different restaurant with varying guests- and the show is such a fun, intimate, honest and completely entertaining look at how chefs (and their well paleted friends) eat and socialize.

Take, for example, a recent dinner at Maremma, an Italian restaurant run by Owner/Chef Cesare Casella- a Tuscan native with the most charming, what-on-earth-is-he-saying accent I’ve ever heard. Thanks to subtitles, you can hear all of the amusingly competetive banter between he and Daniel as they do the prep for tonight’s meal. At one point Daniel shows Casella a cake that he made for dessert- a huge round of brioche stuffed with cream- and says to the Italian chef “You see- the French inspired the Italians to make cannoli with this cake,” to which Casella replies “Oh yes, the Italians took the French idea and made it more refined,” while Daniel jabs back with “No, the Italians simplified it.” They laugh, drink a glass of wine, marvel at some gorgeous California artichokes that Daniel will also be serving at dinner and do the hug/kiss thing, then depart for the afternoon.

Tonight’s guests include Craft Owner/Chef and Top Chef Head Judge Tom Colicchio, actor/comedian Mario Cantone, actress/wine buff Lorraine Bracco and a couple of other NY area chefs and writers. They all sit at a private dining table with Daniel and Casella- and the food parade begins. Although each dinner for each episode is at a different restaurant, Daniel almost always contributes a dish or two- and tonight he starts with the artichokes and then some sea scallops with garlic butter (when you see the amount of butter Daniel dollops onto each scallop, it’s almost frightening!). There’s a lot of “ooooohs” and “aaaaahs” from the table, a decent amount of wine poured, then the real fun begins. One of the guests tells a great story of how he accidentally fell into the catering business after bragging to a friend at an event that the food was crap and that he “could do better food with one hand tied behind my back.” Two weeks later he gets a call to cater an event- an after party for an up-and-coming comedian named Steve Martin, who, incidentally, is a vegetarian. Mario Cantone does his dead-on Julia Child impression- and everyone is laughing so hard that they can hardly keep the food in their mouths. After the impression is over, they all stand up and toast to Julia. Daniel continues the “French are better than Italians” jokes to which Casella tells a hilarious story about how the French would not have underwear if it wasn’t for the Italians- and his crazy accent and animated manner of speaking makes it come out like “Da Frinch, dey didn’t hove no UNDERWEEEEEEER! NO UNDERWEEEEEER!” and Colicchio just looks like he is gonna absolutely die of laughter. The main course that Casella made- a roasted baby goat- arrives to much applause and everyone digs in, relishing every bite. The stories and jokes continue until everyone seems so full that they just can’t eat anymore. Cantone jokes that he can feel the brioche on his ass.

I’ve seen several episodes, and all of them have the same, wonderful elements that make the show so utterly interesting, entertaining and heartwarming all at once. Daniel’s bravado (well-earned, of course!) and unexpected humor, the restaurant chef’s insights, the two chefs working together, the personalities of each different guest, the food itself and the stories that pop up during these meals make such a perfect combination into one perfect show. The restaurants and chefs showcased are amazing- Wylie Dufresne and his wd-50, Shea Gallante and his CRU….obviously Daniel is such a legend in the culinary world that all of these young chefs look up to him and are honored to have him host these dinners in their restaurants.

Few shows (if any, quite frankly) give you such access and paint such an intimate portrait of real chefs doing their thing, but After Hours With Daniel really hits the mark. I get so excited when my TiVo has a new episode on it- and every single one I’ve seen so far has been so completely satisfying. I urge you to check it out!

Maybe one day, Daniel will invite a food blogger to one of these dinners…….*sigh.* I’m sure I’d keel over from intimidation after the first introduction, but one can dream, no?

After Hours With Daniel
Airs Wednesdays, 10 PM EDT on MOJO