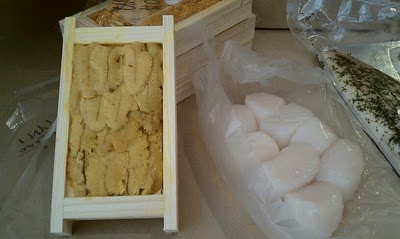 I watch a lot of food-related TV. More than I care to admit, actually. “The Barefoot Contessa,” “Diners, Drive-ins & Dives,” “What Would Brian Boitano Make?” and reruns of “Everyday Italian” are some of my Food Network faves, but my absolute must-watch each week in terms of food TV is “No Reservations With Anthony Bourdain” on the Travel Channel. Snarky/smart commentary, gorgeous locations and tons of food porn all in one show? Sign me up. If you checked our Tivo list you’d see that 80% of it is food-related programming while my poor husband might be able to get some music shows in there once in awhile.

One good thing that has come out of my food-television addition is that I think it’s actually made me a better cook. It happened almost subliminally. The way a chef twirls pasta on a meat fork before plating it, letting meat rest before cutting into it, rubbing lemon juice on cut artichokes so they don’t brown, always checking a cake for doneness way before the recipe says and getting out a lobster tail whole from its shell are all things I’ve seen so many times on TV that they’ve become part of my kitchen knowledge. I did get my Pro I certificate at a short-term culinary program but I think I’ve actually learned more from watching people cook on the tube. Food television also plays a huge role in what we’ll be eating that week since I either see something and decide to make it or get inspired by a recipe and put my own twist on it.

I remember seeing famed seafood chef Eric Ripert on an episode of “No Reservations” making a simple yet luxurious plate of sea urchin spaghetti a long time ago and knew it was something I wanted to eat one day. He simply whisked together equal parts butter and sea urchin which came together to form a velvety sauce to which he added a bit of parmesan, chives and sea salt before tossing in hot pasta. That bowl of spaghetti, with each strand of pasta bathing in the sea urchin sauce and topped with a spoonful of caviar was Giles Marini of food porn- sexy, luxurious, irresistible. 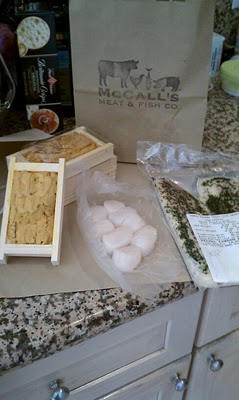 I finally got a chance to take a crack at this dish over the weekend. Dylan had mentioned he and Jeni bought a flat of uni (sea urchin) at McCall’s in Los Feliz, and although they had some plan to use it in a dish, they ended up grabbing a spoon and eating all of it right out of the container. So I promptly put in a call to McCalls and asked them to hold four flats of uni for me for Saturday (and told them to keep the flats away from Dylan should be pay a visit to the shop that weekend). When I went to pick them up, my eye went to a pile of glistening, pearly-white sashimi grade scallops so I had to get a few of those as well. Of course the large slab of perfectly smoked trout covered in fresh dill begged me to take it home so I added that to my purchases. Time for a Seafood Fiesta!

Here’s what we had:

Smoked Trout served with Lemon/Black Pepper Cream Cheese & Crackers: I just softened some cream cheese, added some lemon zest and black pepper and we were off to the races. It was delicious and perfect with the ice cold prosecco that J was pouring. 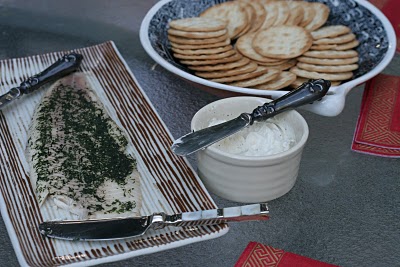 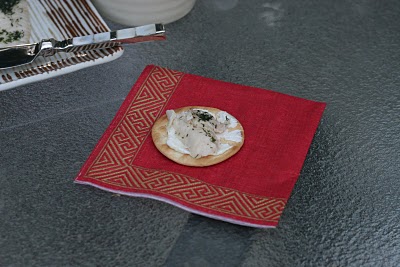 Scallop Crudo: I just sliced each scallop into thinner rounds, plated them up and drizzled them with a bit of extra virgin olive oil, then finished them off with some grated preserved yuzu which I’d made months earlier and some Maldon salt. 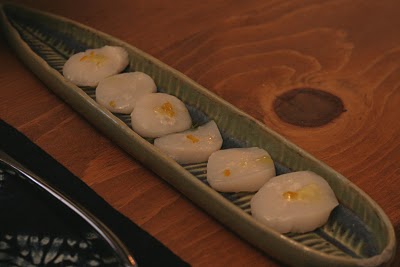 Sea Urchin Spaghetti: This dish is meant to bring out the flavor of the fresh uni, so the only other ingredients are butter and tiny amounts of parmesan cheese, salt and chives. You really don’t need anything else….except a dollop of caviar, of course. I just bought an inexpensive paddlefish caviar which was perfect- the uni is the star, after all. 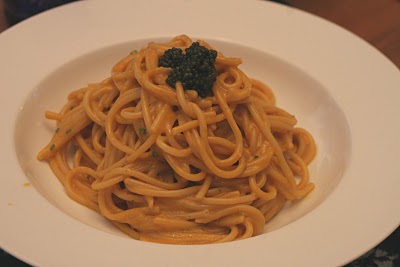 The pasta was decadent, sweet with an ever-so-slight hint of bitterness that was a nice contrast to the richness of the sauce. The briny caviar also worked so well with the luxurious uni emulsion. I actually doubled the amount of pasta for the amount of sauce and each strand was still completely coated with a good amount. Had I done it Eric Ripert-style we would have had a lot of the sauce swimming around on the plate- not necessarily a bad thing, of course- but I thought it was perfect with the extra pasta. 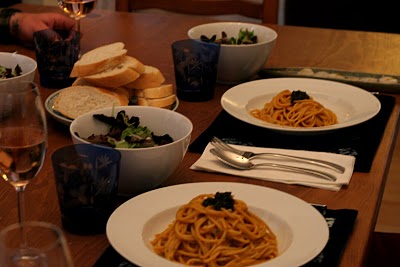 This is one of those “wow” dishes that is so simple- you must try this for your next dinner party. Just make sure that you buy top quality sea urchin since its 50% of this recipe which you can find here.

you haven’t checked out McCall’s yet, you have to pay them a visit! Their meat and seafood is some of the freshest and most beautiful in town.