It was J’s birthday this past weekend, and although he was on tour in Japan on the actual day, I wanted to make something special for dinner the day he came home so we could celebrate. I went out and bought two beautiful filet mignon and decided to make some gnocchi as a side dish instead of serving plain ol’ potatoes. When I spied a recipe for spinach gundi (pronounced nu-dee) in a new cookbook I’d just purchased, I decided to ditch the potato version altogether and make these ricotta-based dumplings instead.

Well a few things changed and we ended up having four for dinner instead of just J and me; to top it all off, one was a vegetarian. Luckily the gnudi was the perfect thing to serve as a vegetarian entrée, so I simply made extra and served our veggie friend a whole bowl of them while the remaining three of us had some as a side dish to our beef. I’ll post later this week about the rest of the meal, but here’s the gnudi. It’s really easy to make, and would go well with marinara, a gorgonzola sauce….pretty much anything, but I opted to make a forest mushroom cream to coat the fluffy gnudi. 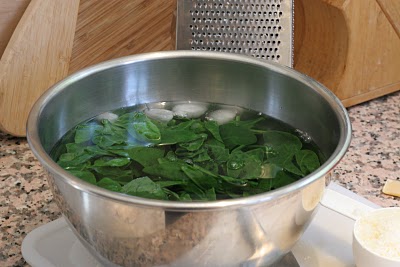 I’d purchased 6 ounces of fresh spinach at the Hollywood Farmer’s Market (which is awesome but so large that it’s almost overwhelming!) and, after blanching it for a few seconds in salted hot water, shocked them in ice water and squeezed the excess moisture until I had 2.5 ounces of spinach.

I combined the spinach with ricotta cheese, which I’d strained overnight in a paper-towel-lined colander,grated parmesan, 2 TBS of egg and flour and kneaded it lightly until it came together. 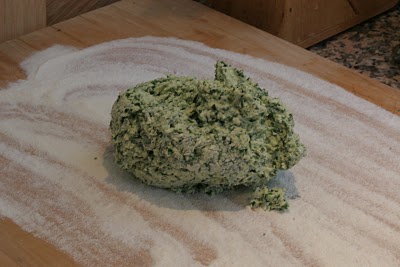 After dusting my cutting board with rice flour, I just rolled pieces of dough into fat tubes and cut them into 1 1/2 inch pieces. I thought it’d be nice to have large pieces so you could cut and eat each one…a lot of the gnudi I’ve seen tend to be larger than regular gnocchi.

These gnudi took only a couple of minutes in boiling water before they were ready to be tossed in sauce. I found some beautiful chanterelle mushrooms at the farmer’s market so I simply sauteed those in butter and olive oil, tossed in some chopped garlic and thyme, added a splash of cognac and then finished it off with fresh cream and a grating of parmesan cheese. 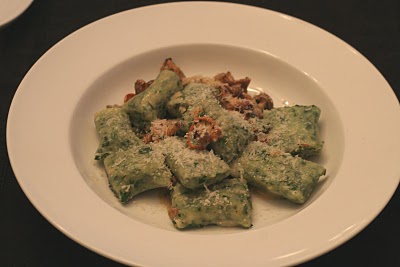 Considering how last minute our change in plans were, I’d say things worked out pretty well. Our vegetarian friend, who normally isn’t crazy about mushrooms, really loved the dish.

I’ll post on the rest of the meal soon!