As readers of this blog probably know by now, I love sushi. Being half-Japanese, it’s something I grew up eating, whether it was of the roll your own variety that my parents served for dinner when I was a kid, boxed sushi in an eikben (a boxed bento sold at train stations in Japan) or at one of the two or three regular sushi joints J and I frequent around Los Angeles. J is particularly fond of it and 90% of the time I ask him where he wants to go out to eat, he says, “sushi.” 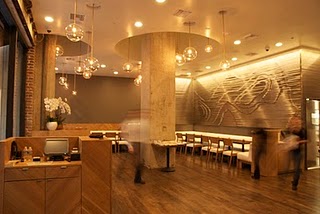 So when I was invited to try the newly opened SugarFISH by Sushi Nozawa, we were both excited.  In the interest of full disclosure, I’ll let you know we were guests of the restaurant and therefore did not pay for our meal. Also in the interest of once again proving I’m a crappy photographer, I had to get images from the restaurant because the ones I took were all too dark to use. Like, Black As Night dark. Anyway, that’s why these photos are so beautiful- I figure if you’ve been reading my blog for awhile, you knew the minute you saw them that they were not mine….*sigh.*

Unless you’ve been living under a rock, you’ve probably heard of Chef Nozawa and his namesake sushi restaurant in Studio City, and you may have heard that he’s often been dubbed “Sushi Nazi” for his insistence that diners eat what he recommends, prepared in a manner he sees best brings out the quality of the fresh fish. I’d certainly heard of him, but for some reason never got out to Studio City to try his sushi. Also, I’d had a particularly bad experience with another sushi place that has its own “Sushi Nazi,” and although I won’t mention the name of the place here, I’ll say that I barely had one foot in the door before the hostess practically barked at me, “We don’t have spicy. We don’t have mayonnaise. We don’t do spider roll. We don’t have Dynamite.” Actually I sort of wish she had some dynamite because I would have tossed in it her direction (too harsh?). I mean, do I have a sign on my head that says I’m Ignorant??? I almost walked out had I not been so hungry, and although the sushi at that anonymous-Culver-City sushi spot was good, it hardly erased the attack we faced when we walked in. We crossed that place off the list and never went back.

Anyway, moving on to Chef Nozawa and SugarFISH- I’ll be honest in saying I really didn’t know what to expect, but I was wary that I’d face another dressing-down like I’d gotten by that Culver-City place (that is not related in ANY way to Chef Nozawa or any of his restaurants, just to clarify!). When J and I walked in, it was quite the opposite- we were warmly greeted by the hostess and the manager, who showed us to a table- there is a bar where you can eat sushi but no “sushi bar” at SugarFISH. All of the sushi is created in the semi-open kitchen. Since J and I always sit at the sushi bar of any sushi restaurant, it was something new, and the dimly lit restaurant was cozy and inviting.

SugarFISH founder Emanuele Massimini sat down with us and started telling us about the concept behind what has already become a small chain (in addition to downtown, they have locations in Brentwood and Marina del Rey). He spoke very passionately about how his personal love of Chef Nozawa’s food drove him to get into business with him- how he and his friend dined weekly for years at Sushi Nozawa and kept the restaurant at #1 on their list of worldwide favorite places to eat. Eventually this passion for and belief in Chef Nozawa’s food lead to Massimini spearheading the SugarFISH idea. Basically, the team wanted to bring the quality Chef Nozawa is known for to people who may not want to spend $100 per person, or for people who assume lower-priced sushi must not be very good. Sure, there are existing sushi chain restaurants out there, but SugarFISH differs from, say, Wokano because they are focusing on traditional, authentic sushi; keeping the menu relatively small and showcasing top quality fish. This goes in line with Chef Nozawa’s famous “trust me” mantra.

SugarFISH offers three ‘omakase’ (chef’s choice) menus, and we were encouraged to try The Nozawa, the largest of the bunch:

Needless to say they didn’t need to twist our arms, and we were immediately served the edamame, which I’m going to go out on a limb and say were some of the best I’d ever had. They were perfectly room temperature and well-seasoned, but there was no appearance of salt on the outside of the pods. Edamame is free in most sushi places but it’s really hit and miss. These were definitely a hit!

The Big Eye tuna sashimi was served thinly sliced and stacked in house made ponzu sauce. Incredibly fresh and light, we both enjoyed this dish immensely, and I have to say it really got me excited for the rest of the meal.

After that the parade of nigiri started- the salmon nigiri had a sprinkling of beautifully toasted sesame seeds which were the perfect foil to the fatty salmon. WOWZA. I’d love to describe each single piece of nigiri we had but honestly I was more focused on just eating and enjoying it than taking mental notes. Here’s your mental note: it was all awesome. It was. Every piece was the perfect size- one bite, with the rice being slightly warm and lightly compressed so you’re not filling up on rice but instead tasting the freshness of the fish. Some of the fish comes dribbled with ponzu (a house made chili ponzu was my favorite) while others require a light dip in house made soy sauce.

When the toro hand roll arrived, we were encouraged to eat it quickly so the nori (seaweed) would stay nice and crisp. We did the same with the blue crab hand roll- the flavor of the crab was so pronounced and the nori crackled nicely. I also appreciated that they didn’t fill the nori from end to end- each time I took a bite, it pushed the filling slightly back into the extra space so there wasn’t any loss of the good stuff.

The ‘daily special’ was lobster, so we had another beautifully crafted hand roll, and capped off the meal with an order of creamy uni (sea urchin).

Not only was everything exceptionally well-prepared, but the prices are really keeping in line with SugarFISH’s mission to bring excellent sushi to people at a much lower price. The Nozawa course is priced at $35-$38- with the higher price being charged if the day’s special is something that costs more. SO you’re getting sashimi, and 12 pieces of nigiri + 2 hand rolls and their delicious edamame for under $40. Pretty incredible. 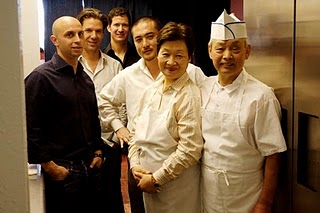 I know I’m practically gushing and I’ll take a risk by pointing out something else that is pretty awesome about SugarFISH- they include the nutritional information on the back of the menu. Now before you say “I don’t wanna know that stuff” I’ll assure you, there’s nothing to fear. The Nozawa dinner course (which we had- the uni was extra) clocks in at 850 calories- not bad at all when you consider that’s probably the amount you’d get in half of an appetizer at many restaurants these days (scary!). The slightly smaller “Trust Me” course has 695 calories while the “Trust Me Lite” has a mere 390!

We really enjoyed our experience at SugarFISH, and will definitely be going back whenever we get a hankering for sushi but don’t want to make a big night out of it. I still love to sit leisurely at a sushi bar, chat with the chef while drinking sake, but that’s usually a weekend kind of outing. I think having an option like SugarFISH is great for those who demand top quality sushi but don’t want to spend a Saturday night’s worth of money on a Tuesday night. Make sense?!