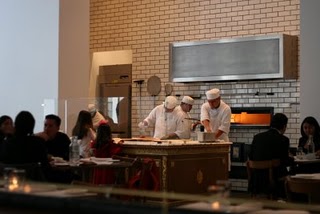 Holy cupcakes- it’s been forever since the last blog post! It isn’t that I haven’t cooked or eaten lately; I just feel like I’m in a bit of a blogging slump. J, ever helpful, often calls out “did you take a photo?” before taking a bite of anything, and I just respond by shrugging and digging in. I’m not sure exactly what it is, but it could be that I’ve been really enjoying some nice, post-work bike rides to the Rose Bowl with J, so by the time we get home and eat, it’s late and I’m too hungry to stop for photos! Oh, and Gossip Girl might be on TV (don’t judge!).

Anyway, one afternoon a few weeks back, we decided to ride our bikes from our home in Highland Park to downtown, to check out Bottega Louie, a new restaurant/bakery/deli/bar/cafe that had just opened. It took us just over an hour to get there, and we purchased a couple of mini sandwiches and were satisfied, but not necessarily wowed. The space was gorgeous with high ceilings, and the display cases boasted all kinds of goodies, but we felt the staff just didn’t seem to really know what they were doing. On more than one occasion during our first visit we’d see nervous employees milling about, not quite sure what they were supposed to be doing. 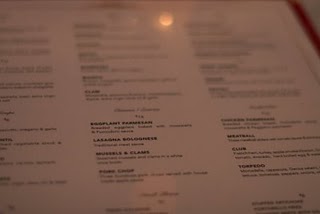 We decided to give it another go, this time for dinner, and were so happy we did. The staff seemed to have worked out the kinks and were working together in harmony, and we were seated right away at a cozy back table. On our first visit I’d seen the pizza oven and knew we’d have to try one of their pies. We ordered the arugula salad, the portabello “fries” and the margherita. All were superb- the baby arugula was spicy and fresh, portabello strips deep fried to perfection and pizza thin, crisp and topped with a light hand. We were thrilled.

We went back and were as pleased with the second visit, and this time I finally whipped out the camera. Since we’d already tried the pizza we wanted to check out their other offerings.

Our new favorite rosé, from the Bastianich family: 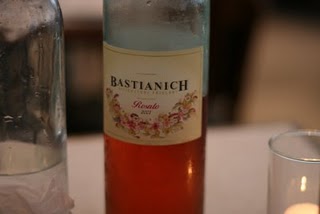 We once again ordered the arugula salad and it was as perfect as the first time: 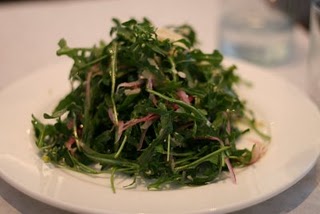 The arancini were good, but not as good as the ones at Terroni’s:

The carmelized green beans were beautifully browned, some blackened, and totally delicious: 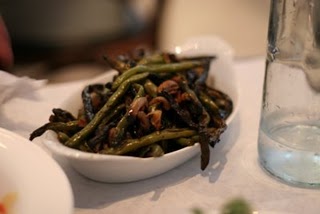 The Fettucini Belmondo was as simple as it gets, and was delicious and fresh:

Everything was good, but I think the real winner is the pizza, which we’ll be back for repeatedly (along with that arugula salad!).

We decided to skip the plated desserts and opted to buy a couple of canelés from the bakery to take home. We’d bought one canelé on our first visit and were totally, utterly hooked. It was quite possibly the best canelé I’d ever eaten- slightly crisp and carmelized on the outside and tenderly moist on the inside. We picked out one vanilla and one orange canelé and I handed the cashier at my credit card.

After two swipes, the cashier apologized and said that the machine had been wonky all day and wasn’t reading my card. I handed her another, and, after two attempts it went through. This entire process took about 90 seconds and I was too busy gawking at all of the food in the display cases to really even pay attention. The staff acted like they’d killed my goldfish, and, having overheard me telling my husband earlier that I should have gotten a pisachio eclair, asked me to wait while they got something for me for my “trouble.” I tried to tell them that it was no big deal and it really wasn’t any trouble but they insisted and handed me a large box. I felt awful so I tried to give it back and they just kept insisting, smiling and winking that I’d be happy when I opened it.

I mean, holy cow. Let’s take inventory here: two chocolate macarons, one vanilla macaron, a madeline, one giant brownie, a blueberry scone and my beloved canelé! By the way, I ate the pisachio eclair in the car so it isn’t pictured (I know, I’m a pig! But it was a mini eclair!) but get a load of these sweet treats! All because it took four attempts to swipe my credit card? I still felt bad about it but they seemed like they really wanted to, so of course J and I sampled some of the treats and I took the rest to work. The canelés are still my favorite, but the chocolate macarons were pretty amazing too.

Check out this perfectly made canelé

I mean, they had me at marghertia……. but now, I guess they complete me.