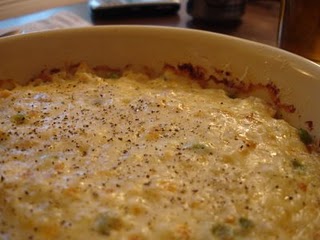 Doria. I’ve said that word to every food-loving friend multiple times in the seven years I’ve been back from living in Japan, and they all look at me with the same, Never-Heard-Of-It-What-Is-It look. I’ve spent time googling it and trying to find where the word originated from, only to be bombarded with endless pages of people named Doria Rice. What is doria, you ask? It’s just about the Greatest Dish On The Planet, my friends, and consider your taste buds sad from having to live without it for so many years.

Basically doria is a rice gratin. It comes in many flavors- sometimes it’s made with a béchamel-type sauce; other times it oozes piping hot marinara or even a demi-glace. It is extremely popular in Japan and found on just about every Italian or fami-resu (that’s Japanese slang for “family restaurant”…which, come to think of it, is ALSO Japanese slang- think Denny’s, Applebees, etc) menu in the country. Most coffee shops even make one version of doria. “A lot of countries have popular dishes that aren’t well-liked here,” you say. But what’s not to like about rice, sauce and cheese all baked together in a dish and served piping hot out of the oven? It amazes me this shoe-in for Best Comfort Food hasn’t made a blip on the food radar here in the States, where oozing cheese is ranked high on the list of Things People Want To Eat On A Daily Basis.

After many fruitless years of searching, I decided that if I wanted doria, I’d have to make it myself. I’ve made ones with tomato sauce, eggplant and mozzarella; others with Mexican rice, a spicy tomato salsa, white sauce and cheddar. Want steak doria? Just combine some rice with diced steak and maybe mix it up with a deep, brown demi-glace, chopped parsley and grated Gruyère and then top the whole thing off with grated parmesan! It’s a great way to use up leftover rice and pretty much anything else you may have in the fridge. The basic elements are simply rice, some sort of sauce, and cheese. Add whatever else you like. 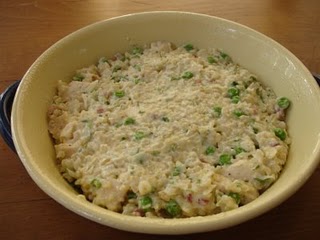 Doria, just before a sprinkling of parmesan and a trip to the oven

Well, meet Mika. Mika is my best friend, soul sister and a fellow doria fanatic. She and I used to go to a little spot near my Tokyo apartment called The Apple Pot (oh, how I miss you!) that made the BEST chicken doria ever. It was a tomatoey rice mixed with lots of chicken, those frozen mixed veggies that we all ate as a kid (carrots, peans, corn) and drenched in the tastiest béchamel which bubbled out from a mountain of melted cheese. YUM! Mika resides here now and feels the pain of the non-doria culture we live in, so we’ve had numerous conversations about our beloved baked rice dish. When she and I planned to watch the Super Bowl together, I decided to surprise her with a custom made doria just for her.

Hot and bubbling out of the oven

One thing you should know about Mika is that she loves anything cheesy, creamy, rich and decadent and lists Kewpie Mayonnaise as her Favorite Food Ever. It hardly seems fair that she has a waist the circumference of a Frisbee since she puts extra mayonnaise (ONLY Kewpie brand though- she knows what she likes!) on any vegetable she consumes and orders spaghetti alla carbonara every time we go to an Italian restaurant. Luckily she’s one of the coolest girls I know, so although I’d love to envy her speedy metabolism, I love her dearly and am happy to contribute to her mayo/cream/cheese habit anytime.

I wanted to make her a doria that had all of the flavors she loves the most (sans mayo, which I knew she’d put on the salad I was planning to serve with it). So I decided on a sort of carbonara doria. After rendering down some pancetta I sautéed some onions in the fat, then tossed them in a bowl with the pancetta, diced roasted chicken, brown rice, green peas, grated Asiago and a creamy cheese sauce made with milk, asiago and a bit of egg mixed in to thicken it. After adding LOTS of black pepper (another Mika staple) I poured it into a baking dish, topped it with a nice grating of parmesan cheese, covered it with foil and baked for 20 minutes. After 5 minutes without the foil, the top was golden and it was ready to serve. 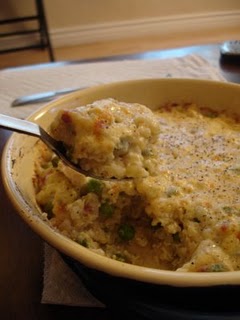 Mika loved the doria (I’d made myself a Mexican doria since I had leftover beans I had to use, plus my waist isn’t the size of a Frisbee!). I’ll definitely be making more dorias in the future, but if you get a chance, I hope you try this one. It’s made a bit healthier with brown rice and milk for the cheese sauce (instead of cream) and sure to please anyone who has a weakness for cheesy baked dishes.

Preheat the oven to 400 degrees.

Sautee the pancetta in a pan over medium heat until the fat is rendered and the pancetta is slightly crispy. Remove the pancetta with a slotted spoon and add the onions, sautéing until they are translucent. Combine in a large mixing bowl along with the pancetta, rice, chicken, peas and parsley and set aside.

In a small saucepan, melt the butter under low heat, add the garlic clove and swirl it off the heat for about a minute to impart the garlic flavor; discard garlic. Add milk, heat under low heat until hot but not boiling, then add cheese, whisking constantly until cheese is melted and combined with the milk. Put your egg or egg beater into a small bowl, then add about ¼ cup of the milk/cheese mixture while stirring, then add it back into the saucepan with the rest of the milk/cheese mixture. Whisk over low heat until thickened, then add salt and pepper to taste. Pour over other ingredients in the bowl and mix well to combine. Taste for seasoning and add salt and pepper as necessary.

Pour into an 8 x 8 baking dish, or an 8 inch (roughly) round baking dish if you have one, patting the mixture down slightly. The doria will fill the dish about an inch high. Cover with grated parmesan, then cover the dish tightly with foil. Bake for 20 minutes, then take the foil off and bake for another 5, or until cheese on top turns golden brown.