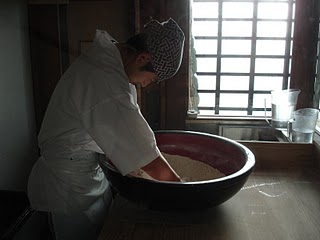 Take a good look at these photos. The serene gardens, trickling water fall, gorgeous Japanese architecture. Did I take a quick weekend trip to Kyoto, you ask? Perhaps a little 48-hour excursion to Kamakura? Unfortunately, I don’t have a private jet nor the means to take spur-of-the-moment vacations to such far away places, but for a moment this past weekend, I could have sworn I was in Japan. 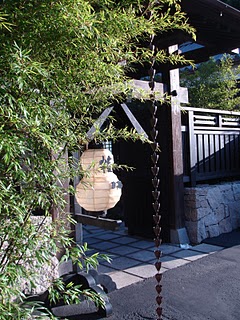 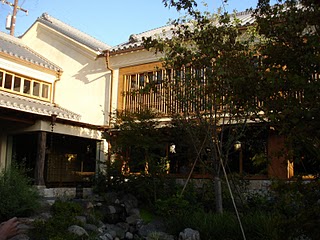 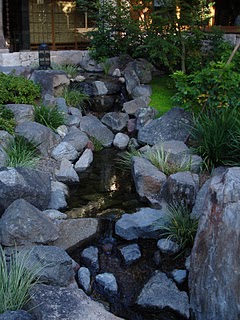 Where was this transforming place? Gonpachi, the new, gigantic robata yaki, sushi and soba restaurant on La Cienega. Much had been written of the struggles the multi-million dollar restaurant experienced after it first opened, so I didn’t want to go until the bumpy period ended. Last Friday, I was at my best friend M’s new apartment when she suggested we try it out. Since so many of our best Japan memories involve eating at izakayas and yakitoriyas, we hoped Gonpachi would be a little blast to the past. After all, J was in Japan this past weekend so M and I wanted to get in on the action by at least pretending we were there!

Upon driving up to the behemoth restaurant, I was instantly transported by the gorgeous shoji doors that lined the restaurant. What an absolutely stunning building!!! Honestly- I can see why it cost so much to build- every detail is meticulous and the scent of the wood reminded me so much of Japan. We both got pretty excited as we were led upstairs to one of the booths overlooking the entire restaurant. M and I had been to Gonpachi in Shibuya twice when were in Japan last November and had fallen in love with the place. When we spotted the long bar seating in front of the robata yaki chefs, however, we asked to be seated there. I love sitting at the bar, chatting up the chefs and being able to order one item at a time, just like at sushi. Since we arrived early, there were only a couple of customers in the giant space and no one else at the counter. 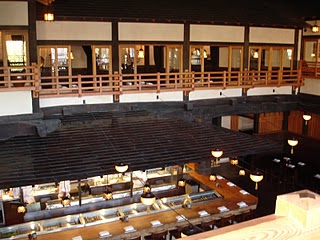 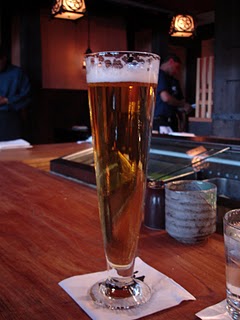 I’ll be honest- when I realized that the two robata yaki chefs who greeted us weren’t Japanese, I was disappointed. There’s something about being able to converse in Japanese with the chefs that, for me personally, just makes me feel at home. M and I checked out the menu and decided to start with a few appetizers- the soba salad being one of them. I had read a lot about the hand made soba and had seen the soba maker on my way in, so we were excited to try it. We also decided on the korokke (fried potato coroquettes) and the unagi gohan (eel rice). We toasted with my cold sake and M’s super tall glass of Sapporo and sat back, completely in awe of the amazingly long wooden bar, hanging lanterns and the general vastness of the place. 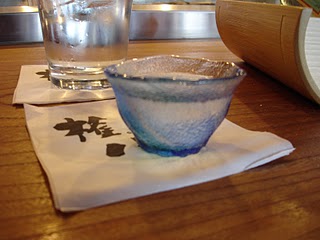 Our soba salad arrived and I couldn’t see a bit of….soba. After a bit of poking around with my ohashi, I could see the small pile of it resting underneath a bird’s nest of shredded daikon and carrot. The soba was also cut into short strands…..I suppose convenient for a salad but really difficult to get a decent chopstick full of. The barely-there dressing was bland and it really should have been marketed as a daikon salad with a hint of soba. The korokke were better- nice, crunchy balls of ground meat, potatoes and cheese (?) which I found a bit strange as Japanese korokke doesn’t usually have cheese. They were dressed like takoyaki usually are, doused with tonkastu sauce (standard) and bonito flakes- again, an odd pairing for korokke which is usually just served with the tonkatsu sauce. The unagi rice was quite good, albeit slightly bland again- a small bowl of sticky seasoned rice topped with unagi slices and served with Japanese pickles. 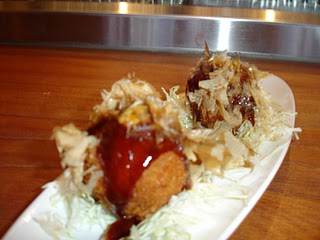 When we started eyeing the robata yaki, a Japanese chef did come up to us and started speaking Japanese, which was nice. We opted for the chicken/negi, the shiitake stuffed with ground chicken, shishito peppers, asparagus bacon and ground chicken (tsukune) skewers with the optional “onsen tamago” which is a very lightly poached egg. All of the skewers were very good, I’d say- especially the shiitake mushrooms with the ground chicken. Smoky, slightly sweet and tender, the flavor of the shiitake was very pronounced and a good match for the soft meat. 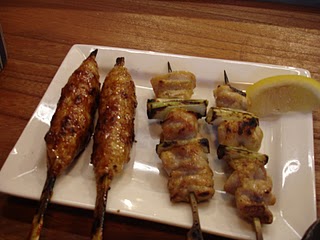 Chicken and negi and tsukune skewers 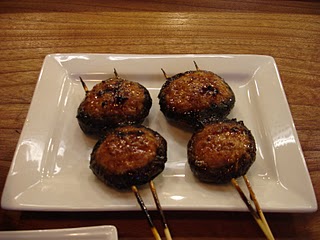 We saw quite a few people ordering dessert, so we decided to share two- the homemade vanilla pudding with macha shortbread and the pumpkin zenzai. The pudding/custard was delicious- creamy and not-too-sweet, and the accompanying cookies were just barely sweet with a very pronounced macha flavor. The real winner, however, was the zenzai – vanilla ice cream topped with sweet anko, pumpkin sauce and mochi balls……..WOW. I mean, this dish would (and WILL) make me return just to get another chance to eat it. The creamy ice cream, sweet red beans and pumpkin sauce blended perfectly, and the chewy mochi balls were toothsome and delicious. Next to the butterscotch budino at Mozza, I’d have to say this is probably one of the best desserts I’ve had in a long time. 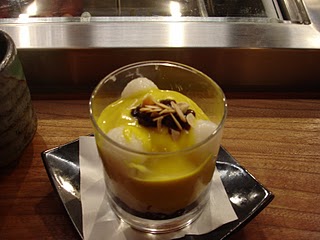 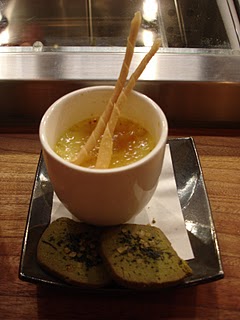 We noticed a lone, stern-looking Japanese man sitting at the end of the counter, keeping a very close eye on the robata-yaki chefs and motioning for one to come over and inspect some of the skewers he had on his plate. We wondered it he was the manager, and upon further investigation, we found out that he was Kozo Hasegawa, the CEO of Global Dining, Inc, the company that owns Gonpachi and a number of other restaurants both here and in Japan. He had flown in from Japan to check out operations, and boy- was he crackin’ the whip. We saw him walking around after we were finished eating, so we took our chance to speak with him and even snap a photo. He seemed genuinely interested in knowing whether or not we had enjoyed our meal so we told him that yes, we did, but we’d love to see a few more Japanese tapas like items on the menu…like an assortment of Japanese pickles (tsukemono no moriyawase) or kastuo no tataki (seared bonito). He said yes, in the beginning they did have more, but that American customers generally didn’t order some things so they took them off the menu. He said he had noticed that we both ordered the optional onsen tamago (slightly poached egg) with our ground chicken skewers, but that hardly anyone ever did so- a super runny egg isn’t really a popular item here in the States. In Japan, the ground chicken skewer is traditionally served with a raw egg yolk, but even the slightly cooked version doesn’t sell here. We did take the chance to tell him how wonderful the desserts were, and how much we enjoyed our experiences at both Monsoon and Gonpachi in Tokyo. 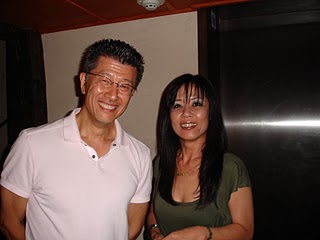 Overall, I think Gonpachi is a gorgeous restaurant whose food is good, but nothing exceptional. The robata yaki and desserts are definitely worth going back for, but the price adds up since the skewers are priced per skewer, not per pair. One will run anywhere from $3.50 for something basic like a veggie, to $18 (!!!) for something more exotic like toro or kobe beef. I guess I just have to get it out of my head that I’ll ever experience the same kind of vibe that I did at restaurants in Tokyo- even if it looks exactly the same as the Gonpachi in Shibuya, we’re not in Tokyo anymore so the Gonpachi here will be decidedly different. M and I agreed that next time, we may just go sit in the open-air bar overlooking the Japanese garden, have a couple of skewers, some sake and that fabulous zenzai and call it a night. 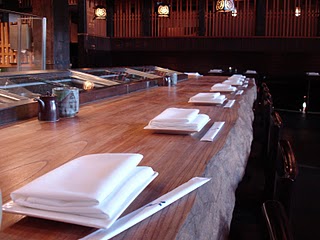 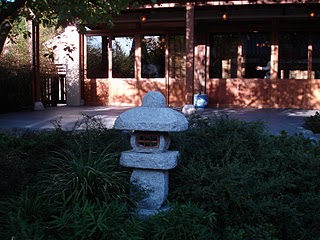