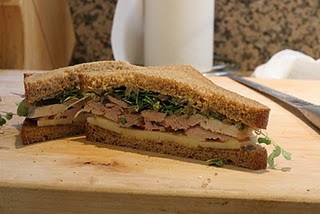 Has everyone woken up from them turkey/food coma yet?  I definitely have, and was happy to realize that today is the day after Thanksgiving which can only mean one thing: TURKEY SANDWICHES!  As much as we all enjoy the bird, potatoes, stuffing, cranberry sauce, salad, corn and pie, I think you’ll agree that one of the best, if not THE best thing about Thanksgiving is the leftovers.

I love eating the cold turkey right out of the tupperware my parents sent me home with, but my absolute favorite thing in the world to make with leftover Thanksgiving turkey is sandwiches.  There are different variations of the turkey sandwich but I normally chop up the turkey and make it into a turkey salad, with diced onions, celery, pickle relish, kewpie mayo, dijon mustard and lots of black pepper.  Another tradition is to pile some stuffing and turkey between two slices of bread and douse it with gravy, although I guess that’s quite a decadent sandwich!  I’ll be making both of those very soon, but today I made a sandwich I’d never made before, based on a sandwich I’d had at a restaurant recently that blew my socks off.

Before I get to the sandwich- here’s the lovely spread my parents had waiting for us when we arrived: 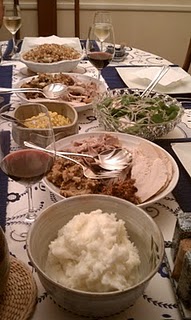 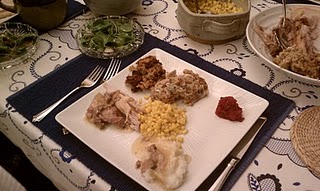 And here is a pic of the most incredible apple pie that my dad made- the crust was so flaky and the apples were tender and warm and just slightly gooey and we all went berserk for it (so much so that this is the only photo we took of it!): 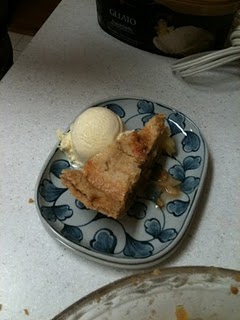 So on to the sandwich.  Here’s what I used: 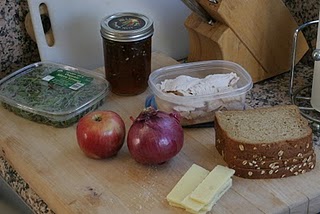 First I made the caramelized onions by slowly sauteing some sweet, yellow onions over low heat- it takes about 20-30 minutes for them to get nice and brown and melted.  Then just lightly toast the bread, and stack the ingredients in whatever manner you like: 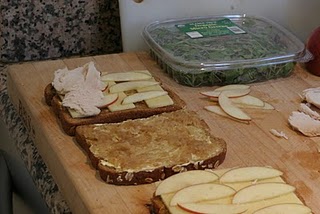 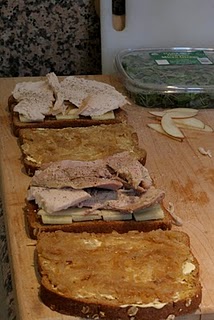 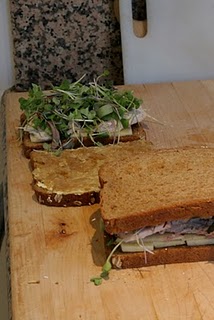 This sandwich brings so many flavors and textures together- the sweet/spicy jelly, mellower sweetness of the onions, the fresh green taste of the microgreens, the sharp richness of the cheddar and the crisp tartness of the apples.  Of course the super tender turkey is the star here, and everything combines to create one, amazing sandwich. 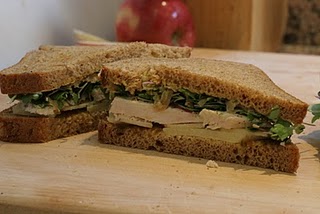 Hope you all had a Happy Thanksgiving!

How was your Thanksgiving? Ours was a small yet lovely affair with my family (J’s family lives up north) at our house. I cooked, we ate and it was a nice, intimate holiday.

I started the prep one day in advance, and the whole process was so stress-free that I found myself standing around both Wednesday and Thanksgiving, wondering if I had forgotten something. I mean, I didn’t cook for an army but still managed to make a lot of food. It just didn’t feel like I did. Strange, but nice, I guess!

Wednesday: I made a simple brine for Herman (our 20 lbs turkey) by combining water, kosher salt, brown sugar, bay leaves and peppercorns: 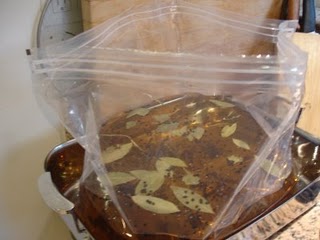 Then I baked the cornbread for the stuffing: 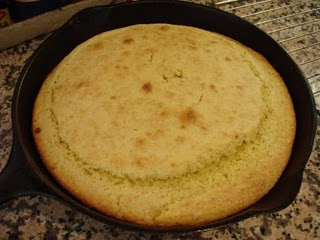 Thanksgiving morning was just about getting Herman out of the brine, patted dry and into the oven, drying out the cornbread, steaming the potatoes and prepping the veggies: 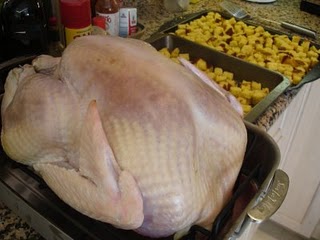 SO Herman cooked up really quickly (brined, unstuffed birds tend to do that) so everything was ready a little early. Here’s the meal:

Turkey: Not sure why I bought such an enormous platter since I served the bird sliced, but I guess every holiday table needs a big ‘ol plate! 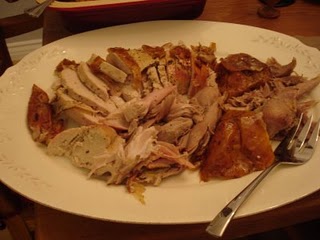 Mashed potatoes: I was thinking of doing roasted fingerlings instead but my sister said that it wouldn’t feel like Thanksgiving without mashed potatoes. 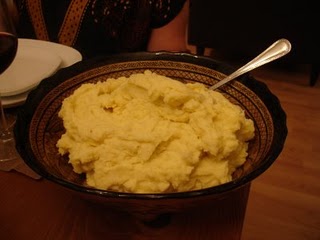 Cornbread stuffing: easily my favorite part of the meal. Slightly sweet, homemade cornbread studded with chewy bits of Spanish chorizo which I rendered and cooked the added veggies in. I could eat this everyday, but my waistline probably wouldn’t be too happy about it. 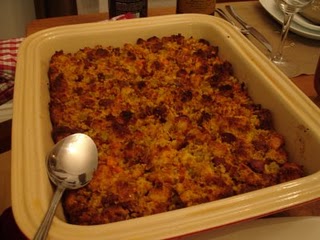 Dessert was made by my sister but we didn’t take a photo- it was a lovely sweet potato pie with sweet sour cream. YUM. 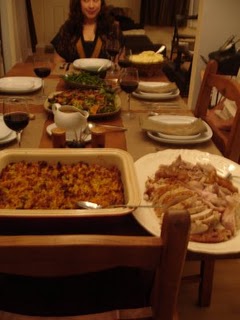 After we ate we just sat on the sofa and watched back-to-back episodes of Three Sheets. Seriously, how on earth do I get that guy’s job? Travel the world and drink. Sounds good to me.

Hope you all had a Happy Thanksgiving!