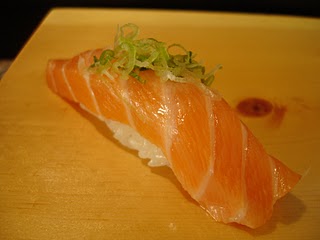 I love sushi. In fact, I think sushi is my favorite food on the planet. The older I get, the more I grow to love it, crave it, need it on a weekly basis. Luckily it’s healthy and there is a lot of variety so it never gets old. Unluckily, it isn’t cheap so it’s quite an expensive habit to have. Fortunately there are a few reasonably priced yet high-quality sushi places in town so I don’t always have to fork over a kidney to get my nigiri fix. 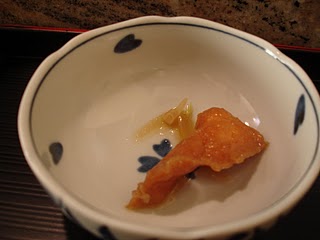 One of those places is Sushi Ike in Hollywood, about a mile or so from my office. I’d always heard about how fresh and reasonable it was but never got around to trying it until a couple of weeks ago. We had one of our cars in the shop so J picked me up from work and we wanted to wait the traffic out so I thought it was the perfect change to try Sushi Ike. By the way, it’s pronounced “Ee-ke,” not “Ike” like in “Mike & Ikes.” 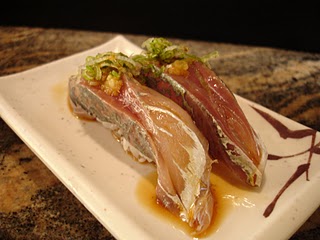 We pulled into the unassuming strip mall on the corner of Gower and Sunset and were lucky enough to be the 3rd couple there (after another 20 minutes, the place was PACKED!). We sat down at the small sushi counter, were given wet towels and ordered two iced green teas while the sushi chef gave us a small amuse bouche of fried salmon marinated in rice vinegar- YUM. My mom makes a similar dish with iwashi so it reminded me of her. 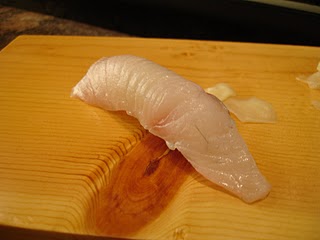 Our sushi chef (not Ike-san, who was working the middle of the counter and all smiles) was nice but very serious, not really chatting with us and focusing on making each nigiri perfect with the smallest amount of rice possible (which is a good thing- too much rice just fills you up). We started with a well-marbled piece of salmon, which was delicious. We then had halibut brushed with yuzu and lemon, scallop with shiso leaf and very fresh aji with ponzu and ginger. 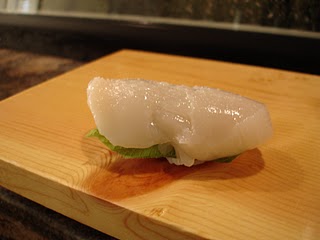 We saw that most people had been ordering the sliced octopus, so we got one as well. The chef took out a pre-boiled tentacle and tossed it on a grill for about 5 minutes. After slicing into nice thin strips, he drizzled it with lemon and salt and presented to us. One bite of this and I knew we were hooked. It was as tender as a baby’s butt. Ok, well I’ve never eaten a baby’s butt but you know what I mean- if you blindfolded any octopus-hater and had them take a bite of this, they’d be converted. It was as soft and tender as dark meat chicken but still had the subtle taste of both sea and grill. I asked Ike-san how on earth they got it to such a texture, and he revealed that they boil the raw octopus in green tea and adzuki beans. Apparently something in the beans is the key to tenderness. Maybe I should give a bag to a particularly tough and chewy coworker who could try a little tenderness as well. 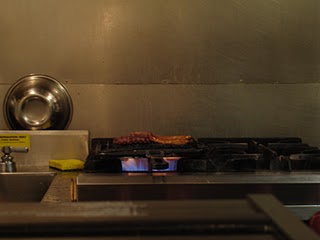 We ordered a “una-kyu” which is Japanese slang for a unagi cucumber roll. Once again, the chef tossed the unagi on the same grill- no toaster oven here- and it made for a slightly charred and utterly delicious eel which matched so well with the cool, crunchy cucumber. We finished off with the anago, which was also made on the grill and unlike any anago I’d had before. It was slightly crisp yet melting on the inside and brushed with the slightest coating of sweet sauce. 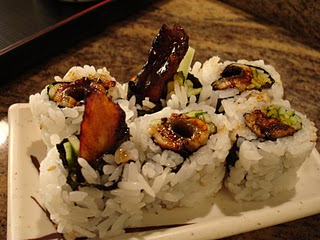 I’m glad we discovered such a fresh and simple sushi place close to work. You won’t get any fancy rolls at this place- just good, fresh fish and the best grilled octopus I’ve ever had.