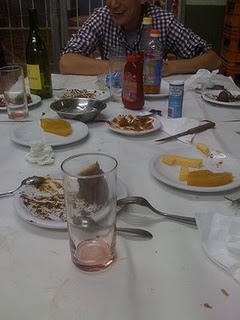 I’m what you’d call a research maniac/planner when it comes to travel. If I’m going to spend 6 days in France, I want to make sure I’ll eat the best baguette, the best foie gras; see the most gorgeous churches and sunsets and generally pack the time with as much good stuff as possible.

The upside of this is that I don’t miss out. The downside of this is that I miss out. Does that make sense? You see, I spend so much time trying to stuff in all of those places I’d read about that I may not leave enough breathing room to simply let a country show me what it has….organically. Exhaustion is also an unpleasant side effect of trying to shove multiple restaurants, parks and nightlife into a few short days.

Last month’s Buenos Aires trip was no different, and I went armed with my list of five tapas bars that I’d somehow deluded myself into thinking we’d hit during our very short, two-day visit. I’d never been to the gorgeous city and had fantasies of sitting at a wine bar, glass of Malbec in one hand and a croqueta de pollo in the other. As most of you already know, I have a fondness for small bar food, and Buenos Aires is known for tapas so I was as happy as a baked clam.

Well, sometimes things don’t go according to plan. In my old life, I would have been so frustrated but one of the biggest lessons I’ve learned from my go-with-the-flow husband is that sometimes spontaneous events end up being way more fun than all of the stuff that was meticulously planned in order to guarantee a good time. It’s very wise advice that has been proven to be completely true over and over again……even during our trip.

To be fair, we didn’t have much of a plan that night except to get a great dinner in Buenos Aires. Since we were in a group of seven friends, I didn’t want to chirp in and insist we go to this tapas bar or another; I wanted to get to Palermo (a neighborhood FILLED with great restaurants) and then innocently point to a few that fit my criteria for a good tapas bar. As we strolled around my eyes darted from one cute restaurant to the next, but just as I was going to meekly suggest a place, a local woman came up to our group and started speaking to us in Spanish. None of us speak the language but between my three years of high school Spanish and a few of the others’ knowledge of a few words and phrases, we managed to understand that she was telling us where to eat. She said she saw us and just had to tell us to stop, don’t go to any of these pretty places but instead to a place where all of the locals eat. She kept saying that it was “ugly” and not much to look and something about soccer being played there (!?!?) but that if we really want to experience good, local grub, that we must go. I have to admit a tiny part of me felt disappointed as I waved goodbye to the sparkly lights of a nearby tapas bar, but I was excited at the prospect of some awesome food. 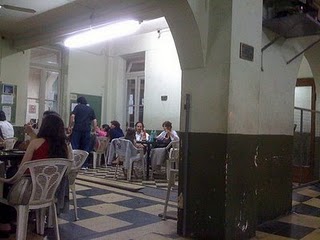 We came upon Club Eros, the place the woman recommended, and it was part restaurant, part in-door soccer club. It was filled with locals and we were the only gringos in sight. There were tables set up inside the main restaurant, then even more in a sort of enclosed patio which also had the soccer stadium which was separated from the diners by a few iron gates. Every seat was filled and the owner/waiter was darting around trying to get everyone’s orders and get the food out as quickly as possible. He saw us and immediately set up a plastic picnic table and some plastic chairs- all of the restaurant’s tables were the same….Wal Marty white plastic sets. We had a great view of the soccer stadium where men and boys kicked the ball around. After taking our seats, we just told the owner that we’d love to eat the house specialties. He said, “Salad. Steak. Fries.” We nodded in agreement, ordered a few bottles of Malbec and waited eagerly for our food. 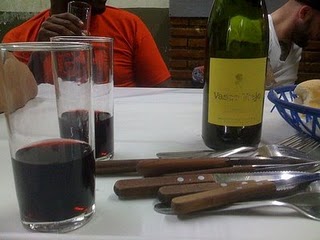 Mmmmm, yummy wine, and only $3 a bottle!

The wine was quickly brought out and we were just finished toasting when all of a sudden, I heard a loud CRACK and look to my right to see my friend Jess on the floor, broken plastic chair beneath him. All of the soccer-playing kids came running to the gate and started laughing and the entire restaurant broke into applause. It was quite a moment. Jesse stood up, took his bow and the owner quickly replaced his chair with a new one. It was hilarious, but I think we all sat in our chairs a little stiffer- after all, Jess is very thin and if he can bust a chair, any of us could! 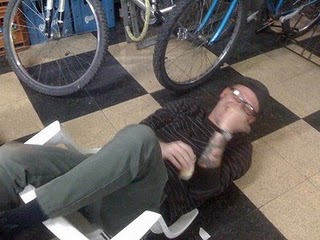 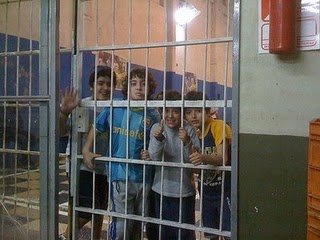 Hahahahah! Kids who were playing soccer run to see what the commotion is all about

Onto the food- the salad and fries were served family-style and both were simple and delicious. The fries were short little nubs that were perfectly fried, and the ketchup that accompanied them was rich and sweet. Our thick, grilled steaks came out and we all dug in……….holy cow (no pun intended). Juicy, medium rare, meaty deliciousness with the right amount of smoke…..it was, quite possibly, one of the best steaks I’d ever had. We pretty much sat in silence as every last one of us finished everything on our plates. 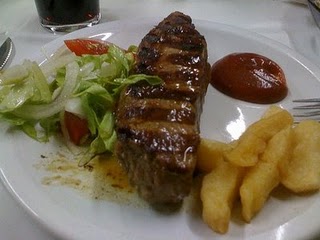 Big, juicy steak that was as good as it looks in this photo…..YUM. 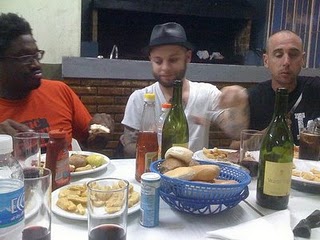 For dessert we shared a few things- a couple slices of insanely rich chocolate cake, two piles of dulce de leche and three servings of a thick, firm cheese served with a mango jelly. A few more bottles of wine later and everyone was floating on food coma clouds. Happy times!

Ok, now the kicker- six steaks, 1 grilled chicken, fries, salad and dessert for the bunch, plus four bottles of Malbec, a couple of waters…………drum roll please….around $67 USD. YUP. Incredible. We were floored. 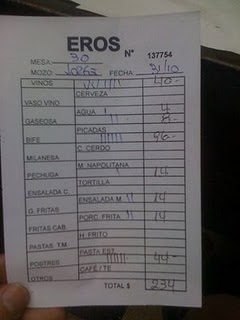 Thanks to the intervention of that lady, we had the best meal of the trip. The entire experience was perfect in every way, and would have been entirely impossible had I stuck to my plan to go eat tapas that night. So my New Years resolution is to improve my “go with the flow” ways and sometimes let the universe lead me….ok, that’s enough hippie talk as I don’t have hippie bone in my body! 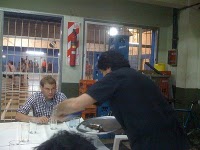