Holiday Baking and a Confession 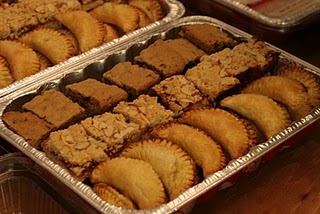 Christmas is right around the corner, and although I don’t go bananas over every holiday tradition, I do love holiday baking.  One of the my favorite things about cooking is being able to feed the ones you care about, so distributing Christmas cookies is a great way to cover a LOT of people at once.

I made my first batch of goodies the other day, and although none were traditional Christmas cookies, I figure if you put them in a holiday container, they’re automatically transformed into Christmas cookies!  Magic!  I knew I wanted to bake three different varieties but didn’t want to end up cursing the pastry gods hours later with flour in my hair and butter under my fingernails (hm, not a great visual!) so I decided to do something I’d never done before.  Ok, here it goes: I bought pre-made pie dough (insert loud dramatic organ chord here)!!!!!!!  I have nothing against pre-made anything but have always tried  making everything from scratch.  Maybe Sandra Lee scared me off with some of her crazy “Semi-Homeade” ideas (Campbell’s Cream of Mushroom can’t be the basis of 60% of your recipes, ok?), but I felt a small tinge of guilt as I purchased two packages of Pillsbury pie crust.  I’ve crossed over to the dark side.  The Sandra Lee side.

Ok, ok…I know I am being dramatic- I did it because I really wanted to make apple hand pies which would involve making, chilling, rolling out and cutting the dough before filling, pinching, crimping, egg-washing and sugar-sprinking ALL before they went into the oven (heck- I’m tired just typing that all out!).  Toss in the preparation of two additional kinds of cookies and I figured I’d probably end up on the ledge of my kitchen window, ready to jump.  Take it from someone who has bitten off way more than she can chew- buying that pie dough not only saved my sanity but it also made the entire experience of baking that day really fun and relaxing.  So thanks, Pillsbury Doughboy.  We will be meeting again soon. 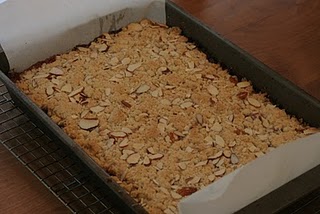 I started off with shortbread and jam bars- I used this recipe from Smitten Kitchen and substituted the blueberries for an entire jar of my favorite Trader Joe’s Cherry Preserves (oh shoot- another store bought element, I AM Sandra Lee!  Argghghggh!).  These come together so quickly but require a long baking time, so once I got those in the oven I started working on the apple hand pies. 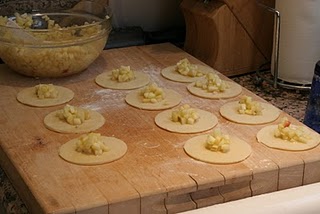 My dad recently made the best apple pie ever, so I got the recipe from him and used the filling for these hand pies.  It’s really a simple mixture of peeled, chopped apples; sugar, flour and a touch of cinnamon. The secret (well, now it isn’t!) is to use Pippin apples, not the Granny Smith that is most common in apple pie recipes.  The Pippin apples melt down to a sweet, soft filling and isn’t as tart as their  counterparts, and I love the fresh, apple flavor.  I rolled out the pie dough, cut out 3 inch circles and filled each with about 2 teaspoons of the apples.  I have to say…this pie dough was SO easy to work with!  I guess when you’re making something that involves as many steps as these hand pies, getting a little extra help is 100% OK! 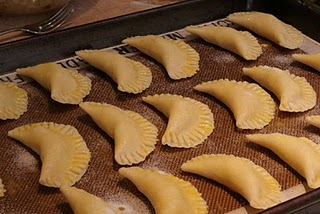 While those were baking I made a batch of white-whole-wheat-chocolate-chip-dough, tossed in some pecans I had in the pantry and spread the dough into a 13 x 9 pan.  Bar cookies are great for large groups since the whole thing bakes at once, then you slice them into a million pieces so you have enough for eveyrone.  Ok, maybe not a million but you get the idea. Dropping teaspoons of dough onto a baking sheet over and over and over gets pretty tiring if you’re trying to bake enough cookies to feed 30 + people.  Another lesson learned from taking on too much in the past. 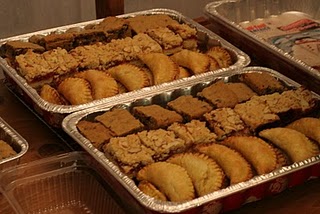 Everything came out really well, and I have to admit- those apple hand pies were so delicious and the crust was perfect!  I’m looking forward to making different varieties of hand pies using the same dough.

6 Responses to Holiday Baking and a Confession