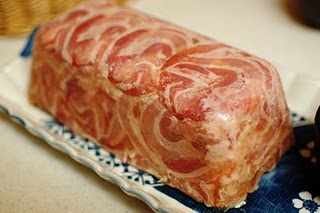 Ok, how many of you read the title and thought of Bugs Bunny?  Perhaps you had memories of a cute, fuzzy childhood pet…possibly named Hoppy or Money Da Bunny (ok, maybe you didn’t but it’d be a cool name, ok?) to whom you’d feed carrots and cuddle with after school.  Maybe the word “rabbit” instantly takes you to the scene in Fatal Attraction when the little girl is running to her bunny cage to greet her beloved pet just as her mother walks into the kitchen to a mysterious pot of boiling something and they scream in unison as one discovers the rabbit missing and well, you know where it ended up.  Don’t worry, this post isn’t about any of those things, so if you hate Bugs Bunny or that scene in the movie, you’re safe.  If you feel weird about eating rabbit, well…don’t say I didn’t warn ya!

My father has been making terrine a part of our annual family Christmas meal for the past few years.  He’s also in charge of the roasted pork loin from which we make many delicious sandwiches, the house cured gravlax with homemade Dijon sauce as well as a big pot of lobster bisque, which is REQUIRED at our party, as he learned the hard way.  One year he decided to skip the bisque in favor of a lighter, more health-conscious butternut squash soup and our guests were literally crestfallen when they saw the swap-out.  After all, there is no way squash anything could be a substitute for chunks of lobster stewed with stock made from its own shells, a dash of cognac and copious amounts of milk and cream, right?  Anyway, since Papa has to make so many items for our big party I figured I’d volunteer to make the terrine, and he obliged.  I mean, does it matter that I’d never made a terrine in my life and this was for a special occasion?  I ignored everything I’ve ever read about never experimenting for a big party and stubbornly forged ahead. 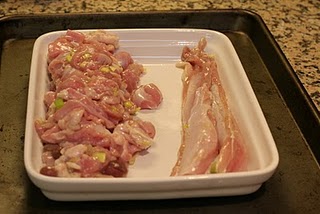 I knew I had my secret weapon in Nathan McCall, butcher and chef extraordinaire.  After a lot of research I’d decided on a mousseline style rabbit terrine I’d spied on a blog called The Chubby Cook.  Unlike the blogger, I wasn’t going to break down an entire rabbit myself (I’m not queasy, I just didn’t think I’d have the time!) so I enlisted Nathan as I ordered one rabbit, with all of the meat removed, 2 loins intact + the reserved bones.  When I picked it up, all nicely wrapped in brown paper, Nathan and his wife Karen smiled, wished me a very happy holiday and I was on my way home to start the terrine! 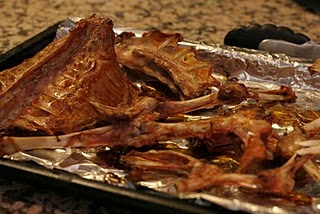 When I opened the package, I was, once again, reminded of how lucky I am to know such skilled artisans as Nathan and Karen.  Those bones were cleaned perfectly and the two loins were beautifully intact.  I actually kind of felt guilty since it must have taken quite some time, and I know how busy they must have been during the holidays!  Anyway, I put the meat in the marinade I’d made and stuck the bones in the oven to brown, so I could make stock for a sauce. 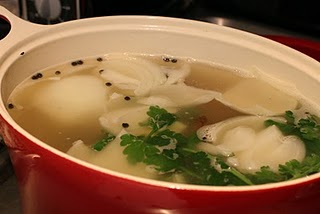 The terrine was actually pretty east to put together- the marinated meat and a few other ingredients went into a food processor until smooth, then half of that mixture was poured into a pancetta-lined terrine mold.  I placed the two seared loins down the middle and covered them up with the rest of the mixture, folded over the overlapping pancetta and baked it in a bain-marie.  After it came out of the oven I weighted it down for a few hours before putting it in the fridge to cool. 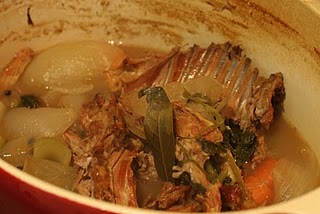 The sauce also came together easily- and although the rabbit stock takes time to make, let me tell you, IT IS WORTH IT.  The roughly eight cups of water cooked down to two cups of rich, rabbit stock which I then reduced down to 1/2 cup.  That demi-glace, some chopped mushrooms, roux and salt/pepper made the most flavorful gravy/sauce I think I’ve ever tasted.  So even though it may seem crazy to brown the bones, then simmer those bones + onion, carrot, bay leaves, peppercorns and celery in a pot for hours to get the 1/2 cup of reduced stock (demi-glace) to make the sauce, you will not be sorry.  All of those flavors come together to make an incredibly rich, delicious sauce that you could pretty much just eat out of the pot with a spoon.  YUM. 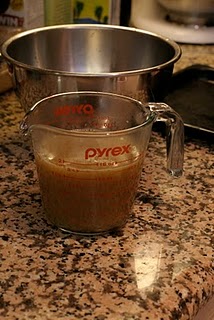 The terrine turned out so well, I think I may make it again next year…or maybe before that!  I love finding the two loins in the middle of each slice- it looks beautiful and adds a nice, meaty texture.  Special thanks to The Chubby Cook for the recipe, as well as answering a couple of emails when I had questions while I was actually making it- how’s that for dedication?!  Also to the McCall’s who make it so easy to get top quality meat and fish which is really the basis for any good dish.  Oh- and I have to give it up to the amazing folks at the Eagle Rock Italian Bakery who, in addition to supplying amazing Italian food and staples to the neighborhood, expertly sliced the pancetta for this terrine…it doesn’t get any prettier!  Check out this meat doily made of the pancetta: 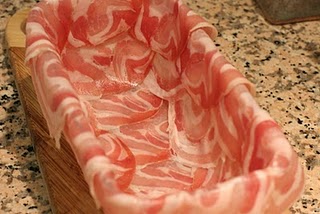 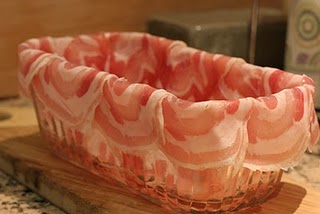 See the two rabbit loins in the center? 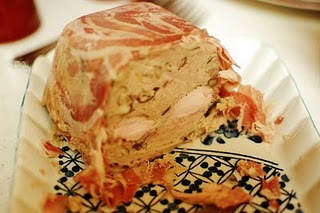 How was your holiday?  Eat anything spectacular?
This entry was posted in festive appetizers, holiday appetizers, mccall's Meat and Fish, rabbit, terrine. Bookmark the permalink.