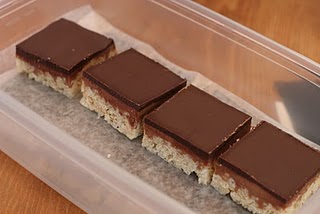 This dessert is everything you’d want in a bar: creamy, sweet milk chocolate and peanut butter sandwiched between a thin layer of rich dark chocolate and another of Rice Krispies.  We could just simplify and call them Crack Bars, because once you try them, you’ll want them.  All the time.  Every day.  Then pretty soon you’ll find yourself in a room with Candy Finnigan while your family looks on wringing their hands and being all weepy.  Yup, you’re in some serious trouble. 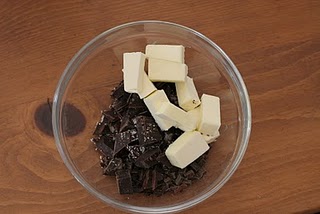 These bars are so pretty that you may feel intimidated, but I assure you, they take very little effort so you’ll be on your way to addiction in no time flat!  I’d seen these bars on Foodgawker many times but put off making them because I, too, thought they looked a bit high maintenance.  After realizing that they barely require any cooking, I went ahead with it, making one major tweak to the recipe to suit my taste.  I doubled the recipe for the rice crispy layer and the chocolate layer but made only one batch of the peanut butter/milk chocolate layer, and I am very glad I did.  I think the middle layer is so rich that you really don’t need much, plus my favorite part is the crispy crunch of the bottom layer which could get lost underneath too much peanut butter.  I also added a pinch of kosher salt to every layer. 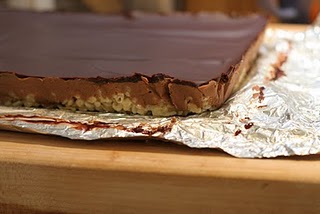 Here’s the recipe as I made it; if you want to use the original, be my guest- I know peanut butter lovers are a passionate bunch!! 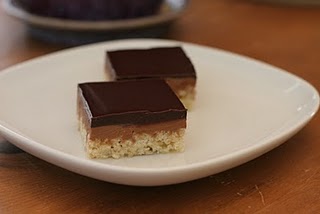 
Line a 13 x 9 baking pan with foil and with a 2 inch overhang on each of the two long sides.  Generously spray or butter the foil.


Pour the Rice Krispies into a large bowl and set aside.


In a small saucepan, combine the water, sugar and corn syrup and cook over medium heat until a candy thermometer registers 235 F (soft ball stage).  Remove the saucepan from the heat, stir in the butter and then pour mixture over Rice Krispies and mix well.  Working quickly, pour mixture into prepared baking dish and press with fingers (wet hands work best) to get an even layer.  Set aside.


Melt the peanut butter, salt and milk chocolate in a bowl set over simmering water (bain-marie) until melted.  Pour the mixture over the Rice Krispies layer and smooth it evenly with an offset spatula.  Put in the refrigerator until set, about one hour.


Melt the chocolate, salt, butter and corn syrup in a bowl set over simmering water (bain-marie) until melted.  Stir in the vanilla.  Pour layer over peanut butter layer and smooth it out with an offset spatula.  Refrigerate until set.


Now all you have to do is grab the foil overhang and pull the entire thing out, set it on a cutting board, slice up into bars and EAT!  They keep well in the refrigerator for several days and will also make your friends very, very happy if you give them a batch.  Depending on how big/small you slice these, this recipe makes quite a bit.  Because of their richness, smaller tends to work better. 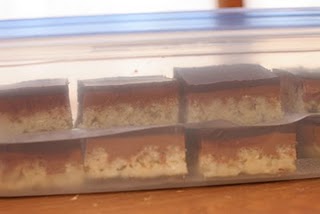 This entry was posted in peanut butter, rice krispies, sweets. Bookmark the permalink.