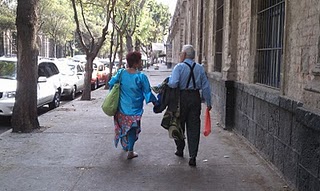 Ok, you’re probably wondering what the stink bugs are all about.  Let’s just say there is a first time for everything, and my trip to Mexico City last weekend contained many firsts, including eating the tiny little critters as part of a fantastic tasting menu at Pujol.  I also had Mexican wine- several different kinds- for the first time and it blew my socks off – it was THAT good.  My friend R said it’s still almost impossible to get it here in the U.S. but I hope that changes soon.  There is some amazing wine being made there and it’s about time the world got a chance to taste it!

I took a last-minute trip to D.F. since J has been down there rehearsing with his band, and another band (which is him and two members of the other band- I know, it’s confusing!) played a show so I figured I’d go check it out.  The flight was quick and easy, and before I knew it, I was in a car, weaving through the intense mid-day traffic to get to our friend’s house where I was staying.

Since J was busy with rehearsals, my friend X was my tour guide.  I’d been to Mexico City twice before but it’d been awhile, so I was happy to have her show me the best of the city.  The first night we spent hours at a mezcal restaurant and had more glasses of the distilled liquor made from agave than I’d like to admit.  We feasted on huitlacoche quesadillas, marinated dried beef on thick corn tortillas smothered with queso and a huge bowl of spicy guacamole garnished with chaupalines, otherwise known as grasshoppers!  They were tiny, crunchy and delicious, and really didn’t have any distinguishable flavor. 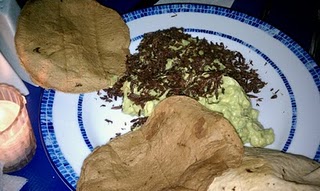 The next day X and I strolled through an enormous outdoor market which featured crafts from all over Mexico, including handmade dolls, plates, blankets and sculptures.  We were there for over an hour and had barely made a dent in the massive market. 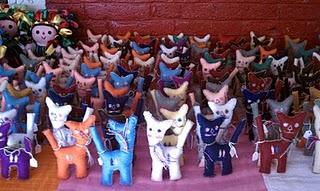 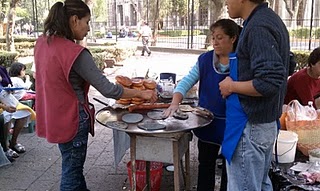 After our shopping excursion, we headed over to her parents for lunch, where we ate a variety of freshly prepared dishes like fideos, salad with avocados, beef sauteed with onions, potatoes with spinach, green beans, sauteed mushrooms all finished off with ice cream topped with cajeta, a gooey caramel.  I was worried that I wouldn’t be hungry for our planned evening meal at Pujol, but it was all so good, I couldn’t resist. 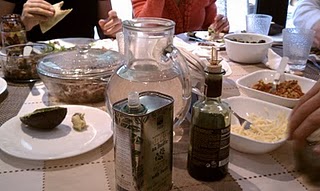 Which brings us to our epic, seven-course tasting menu at Mexico City’s most revered dining establishment, Pujol!  I’d always wanted to go there, but the last time J and I were in Mexico City, the restaurant had been closed for renovations.  This time, they were open and I could hardly wait for the first dish to come out.  Here is our fabulous meal in photos, taken by my friend R.  I’m also using her translations of the dishes since A) I don’t speak Spanish and B) she speaks amazing Spanish and runs a fantastic website called All About Puebla, which also features many food articles.  If you’re headed to Puebla (or even if you’re not!) check it out.  Ok, on to our meal:


Aguachile of sea vegetables. This dish was very ceviche-like, but made with sea beans instead of fish.  Very refreshing. 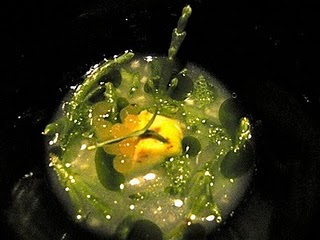 Zucchini flower stuffed with black bean. A one-biter, the beans were savory and well-seasoned. 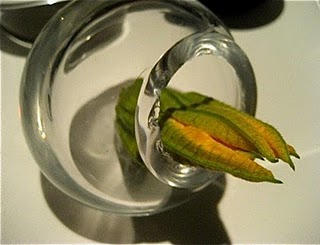 Smoked baby corn elotes with coffee mayonnaise. We each got one baby corn on a skewer- the smoke was inside this large container and very fragrant. 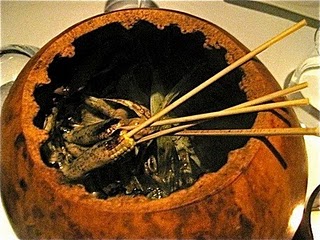 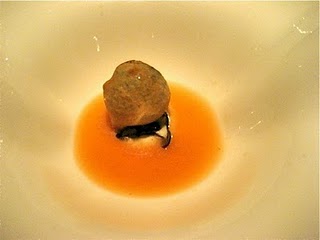 Tomato and zucchini crudité on a bed of black beans with fried tomato skin, queso fresco and toasted stink bugs. Served on a heated wood plank.  The stink bugs were surprisingly flavorful, tasting like a very strong herb.  It was amazing how much flavor they added to the dish, considering how tiny they were.  You can’t really see them in this photo, unfortunately.

Huitlacoche tamale with cream, green salsa and roasted black chile powder.  One of my favorite dishes of the night!  Underneath the cream lies a green tamale with savory corn fungus filling.  My friend X took a big whiff as soon as the waiter dusted the chile powder onto each dish and she almost choked, LOL! 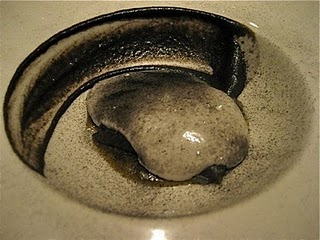 Roasted turkey breast with white carrot puree a plantain “meatball” and pork rind.  Another one of my favorites.  The turkey was incredibly tender. 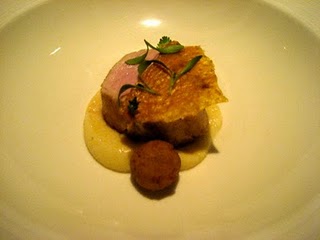 Hominy puree with bits of suckling pig, radish, lettuce, pork rind and chile serrano.  This dish was quite tart, but I think the lime was to offset the richness of the dish.  Not my favorite of the night, but it was good. 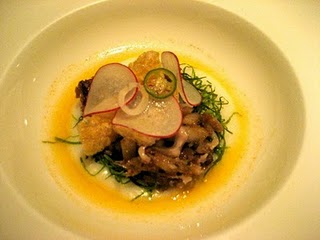 Berry sorbet with mezcal flambee and worm salt.  The waiter poured flaming mezcal onto each of our dishes! 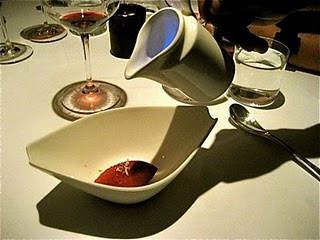 Tres leches sponge cake with vanilla ice cream and “raspberries in nitrogen.”  I absolutely LOVED the “cake” part of this dish- it’s what looks like snow underneath the ice cream. 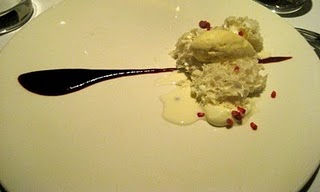 A couple of the incredible Mexican wines we drank with our meal:

R’s boyfriend P opted to order a la carte, and this was his dessert- a chocolate skull filled with vanilla and guava goodness! 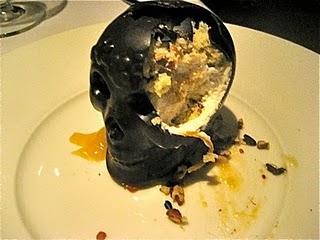 Posing with the chef at the end of the night: 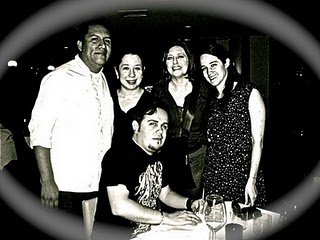 After dinner, we went to the show, which was at a club called Pasagüero.  The guys were amazing, and I’ve never seen such an intense crowd.  They were very close to the stage, and it seemed all 800 or so people had cell phone cameras.  It was truly a great show, and the fans were really phenomenal.  I had as much fun watching them as I did the band!!  You can see video of the show here. 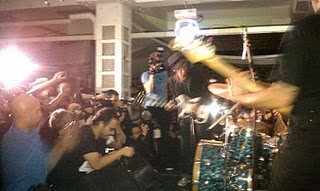 So that is the journal of my whirlwind weekend in Mexico City, one of my favorite cities!  Next time I hope to spend a bit more time there.  Thanks to all of my wonderful friends in Mexico who made the trip so memorable!

This entry was posted in Uncategorized. Bookmark the permalink.