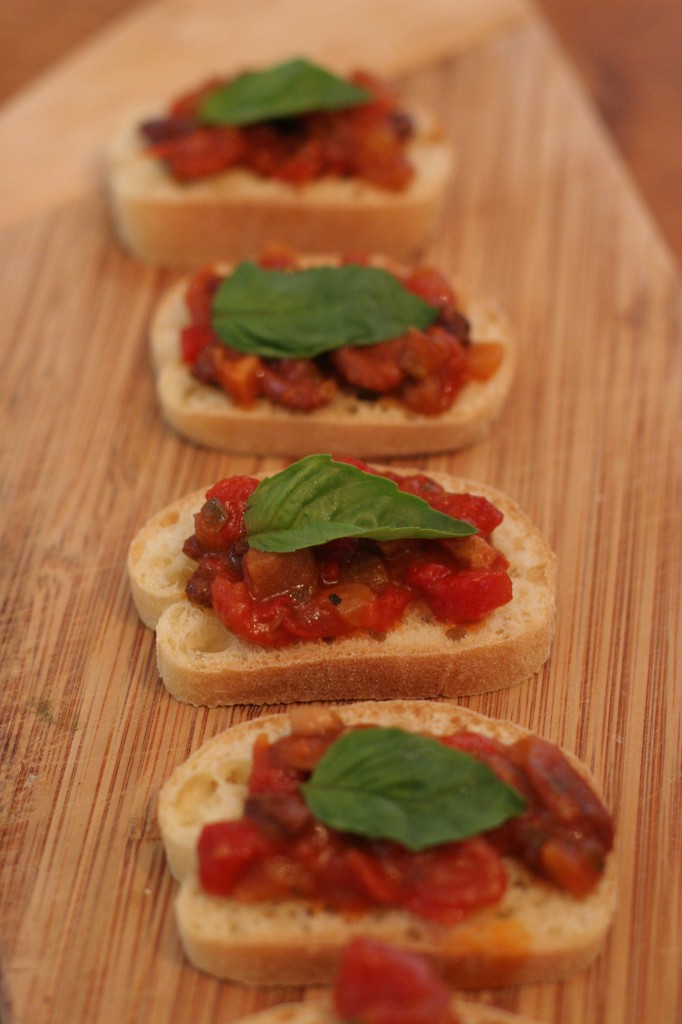 Whoa. How long has it been since I’ve even been on my blog? It’s been a pretty hectic few months and unfortunately Tuna Toast has fallen by the wayside, even though this food blog is honestly one of the reasons why I’m doing the work I’m doing now.

I don’t want to get into it too much, but as the 1.5 longtime readers of this here blog  know, I worked in entertainment media for years up until the end of last year. Since then it’s been a journey- honestly that’s the best way to describe it- to finding something that is both personally rewarding as well as professionally challenging and satisfying. It’s a story you read often on food blogs- blogger works in a non-food industry, is itching to make their passion their profession, makes a leap of faith and either lands on both feet or lands on one foot while the other is still dangling up on a rope somewhere. I think maybe I’m more of the latter – I’m basking in the warm glow of actually working in the food/wine industry while occasionally letting the worry of starting over (hey- I’m not over the hill but I ain’t 25!) damper the experience a bit.  I know I shouldn’t waste any time or energy doubting myself, because it was only a few short months ago that I was bound to a cubicle, daydreaming of working elsewhere. The constant reminder on the nightly news about the state of employment (a complete lack of it!) in this country should also be a reminder that I should feel extremely lucky and grateful to be working at all, much less in a job (make that  jobs) I actually like.

So that’s the update! I’ll keep you posted on how things progress. I’m trying to make it a point to be more personal on this blog, but the Japanese side of me still feels a little timid about letting it ALL hang out, ya know? I can’t help it, it’s ingrained in me to not over-share! 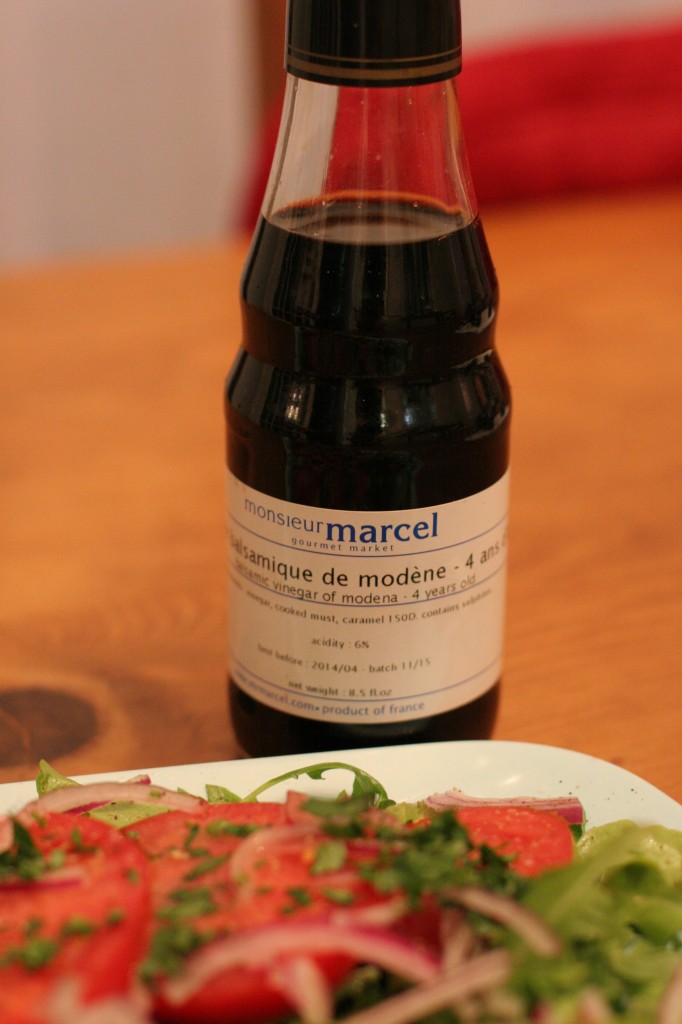 I’d been worrying about my lack of blogging a couple of weeks ago when I got a call from a PR agency asking me to try out some products and blog about them. These kinds of requests come quite often these days, so I’ve made it a point to only post about things I would have written about anyway. I was asked to choose two products from Monsieur Marcel’s line of gourmet sauces and condiments, and I have to admit I was happy to be given an excuse to finally get blogging again. Since most of my posts these days are about cooking, I felt this was perfect because it also pushed me to get back into the kitchen- a place I haven’t spent as much time in since I’ve been working so much. 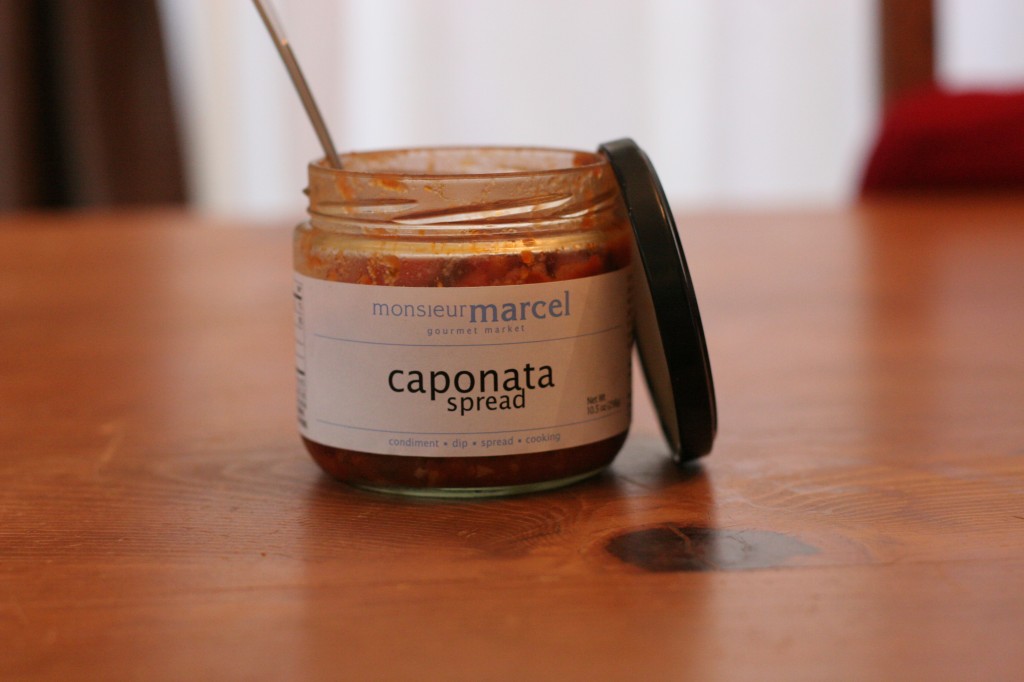 I chose the Caponata and the Aged Balsamic Vinegar- both things that really require no cooking whatsoever but would make for a quick and elegant supper. I simply toasted up some gluten-free ciabatta rolls, which I just grabbed at Figueroa Produce because they looked like “real” ciabatta and I couldn’t resist, and topped the slices with the caponata. This caponata was rich, tangy and slightly sweet, and I loved the combination of tomatoes, olives and currants. Topped with a fresh basil leaf, it was a nice appetizer with a glass of rose.The gluten-free ciabatta was suprisingly good, too. 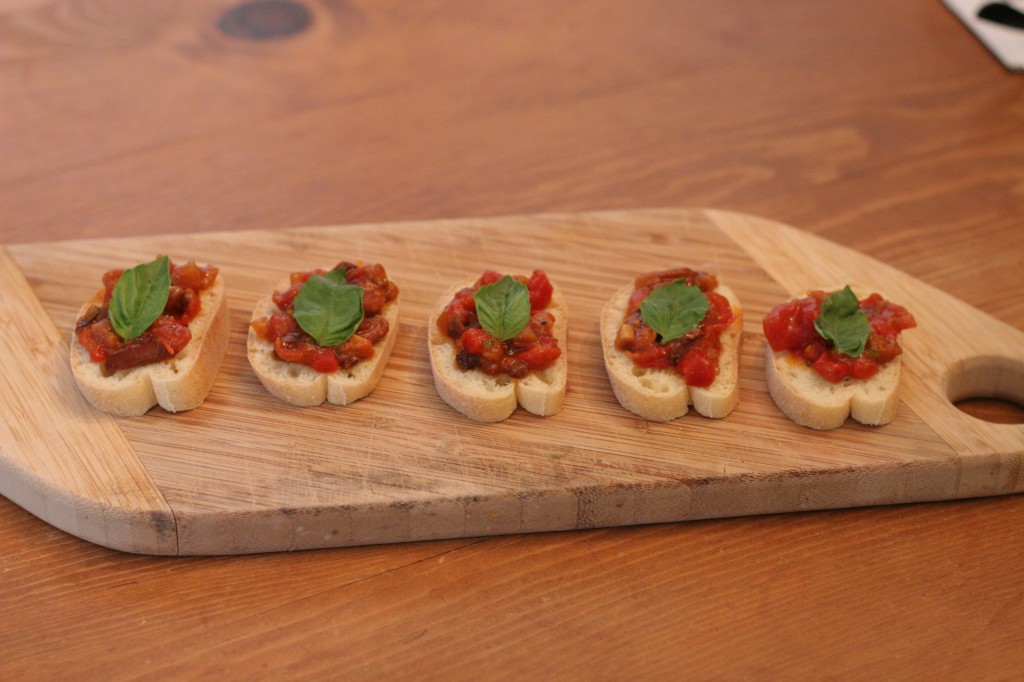 The Aged Balsamic wasn’t quite as sweet as I’d thought it would be, so I made a simple salad dressing using the vinegar, buckwheat honey, crushed garlic, extra virgin olive oil, salt and pepper. My parents had given us some gorgeous tomatoes from their garden so I made a salad of those, some red onion and arugula to dress with the balsamic mixture. 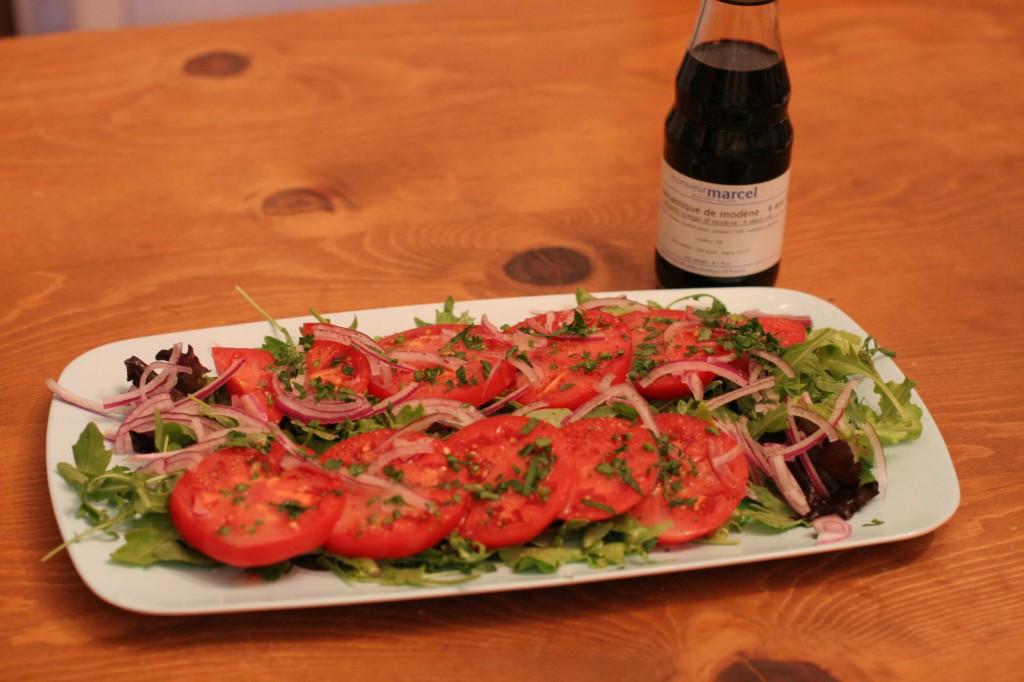 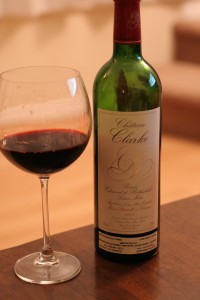 We ate this salad with a red-wine braised pot roast, a gravy of the cooking liquid blended with the roasted carrots and onions in the same pot and a side of roasted asparagus. Oh, and a nice Bordeaux, of course! 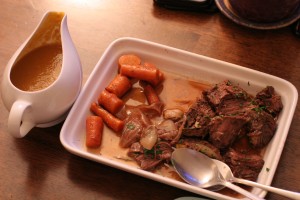 Monsieur Marcel has an incredibly extensive line of pickled fruits, vinegars, oils, tapanades, curds, pasta sauces and other condiments to add a bit of a special touch to your meals. I have to admit I love being able to open a jar of something, spread it on a baguette and serve it to guests, and I feel Monsieur Marcel’s products are very high quality so you can feel OK about opening a jar instead of making it yourself. You know what I’m talking about- the I-Didn’t-Make-It-From-Scratch guilt. Honestly, this stuff is so good you could probably pass it off as homemade! That will bring on another kind of guilt though. Speaking of which- I once was invited to a friend’s house for dinner, and she and her husband pulled out a gorgeous platter of linguine and clams from the oven (they were keeping it warm since we were late). Years later, she told me they’d ordered it from a local restaurant, thrown the packaging away and pretended like it was homemade. What do you think of that?! It reminded me of a scene out of Mrs. Doubtfire….

Anyway, if you’re in the market for some go-to condiments and sauces to make your cooking life a little less stressful, I’d recommend Monsieur Marcel’s line of products. I’m kind of nuts about the minimal design of the bottles as well.

And to those who’ve stuck around and waited for a new post- thank you!