Yes, you read that right. Pasadena. The once shining beacon of boutiques, Bullock’s and Hugo Molina that is now more closely associated with chain behemoth Cheesecake Factory and why-are-they-still-in-business mainstay Mi Piace. To be fair, Settebello isn’t located in Old Town- it’s just east of the main drag, in a section that includes the newly-opened Tender Greens and one of the last few non-virtual bookstores, Vroman’s. Could this segment of Colorado become the new, cooler Old Town? I’ve cast my vote.

The news of Settebello’s impending arrival that I’d read months earlier on Eater LA had teased me all this time; after all, I can’t name a single place east of Downtown where you can get thin-crust, wood-fired pizza in a sit-down environment. Ok, maybe that’s not entirely true- I’d heard whispers about Bollini’s in Monterey Park but toppings like pineapple and smoked chicken scared me out of making the trek. Once I got the email blast that Settebello had quietly opened two days earlier -Eater LA, I thank you- I literally grabbed my husband and we were out the door.

We arrived to a relatively empty restaurant, but I noticed that one of the patrons was none other than Providence uber-chef Michael Cimarusti. Did you know that having him at your establishment is the equivalent of having 50 customers? It’s true. Anyway, I immediately made a dash for the four counter seats in front of the large wood-burning oven, but quickly changed my mind when I felt the heat of the fire on my face after only a couple of minutes.  We settled on two seats facing the oven from a nice, much-cooler distance at the bar.

We wanted to keep it simple (not that it’s hard- you won’t find any pineapple or other bells and whistles here) and ordered a salad and two pizzas. Take a look:

This salad was simple and fresh- albeit a bit tart which kind of killed my wine, but I should have realized that when I ordered it. They serve the salt and pepper on the side so you can dress it to your taste, which I thought was a nice touch. 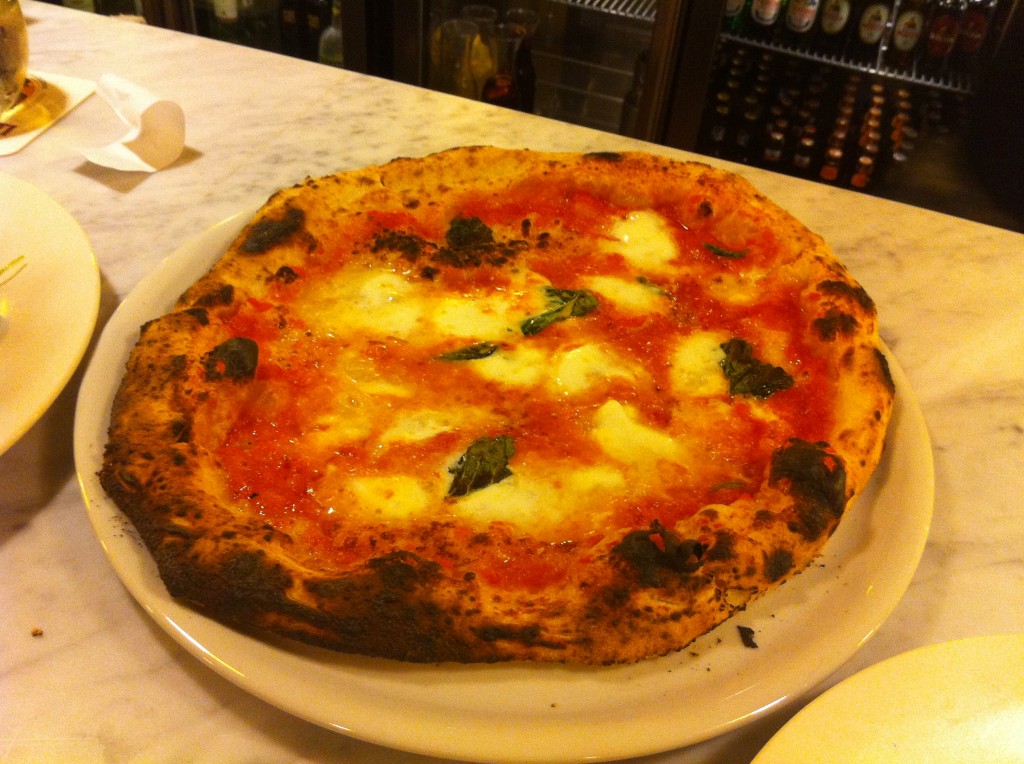 The crust was nice and chewy and was pleasantly seasoned- as in, salted. Not salty, but just salted enough so it brought out the brightness of the tomato sauce and freshness of the cheese and basil.  I thought that the center could have been cooked just seconds longer to avoid “the droop,” which J prevented in this photo by placing his hand in just the right place: 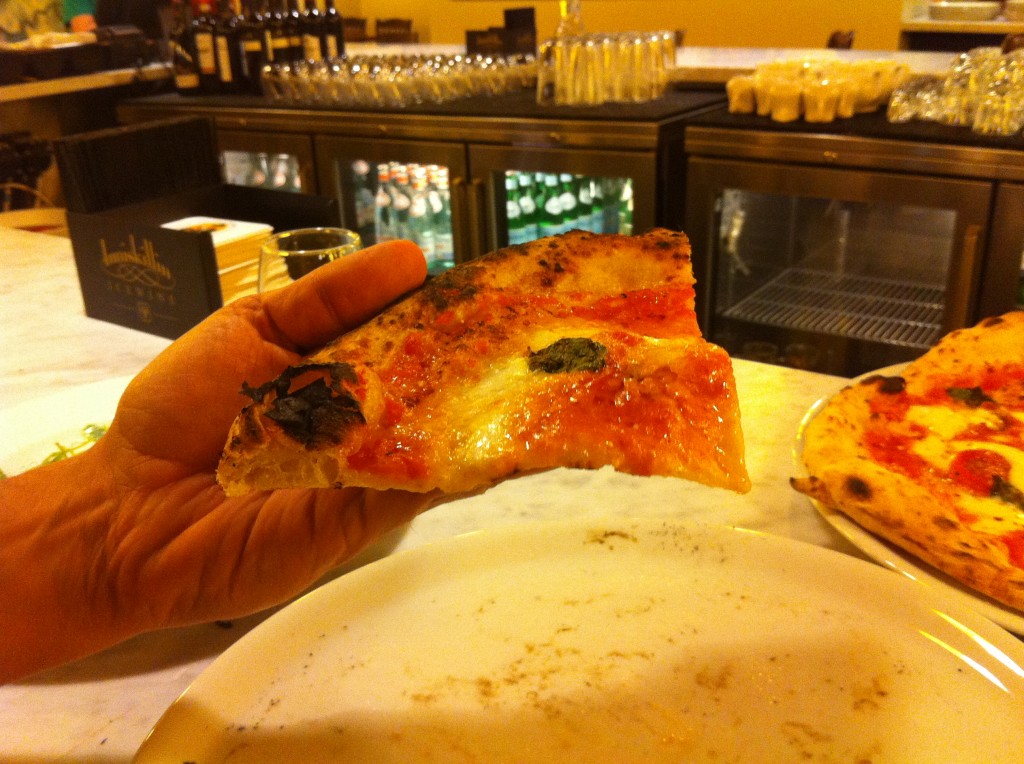 We were quite happy. The kind of happy you felt when you’d discovered chocolate in the form of a Hershey Bar….until Valrhona came along and kicked that little Hershey’s butt. Here’s the pizza equivalent: 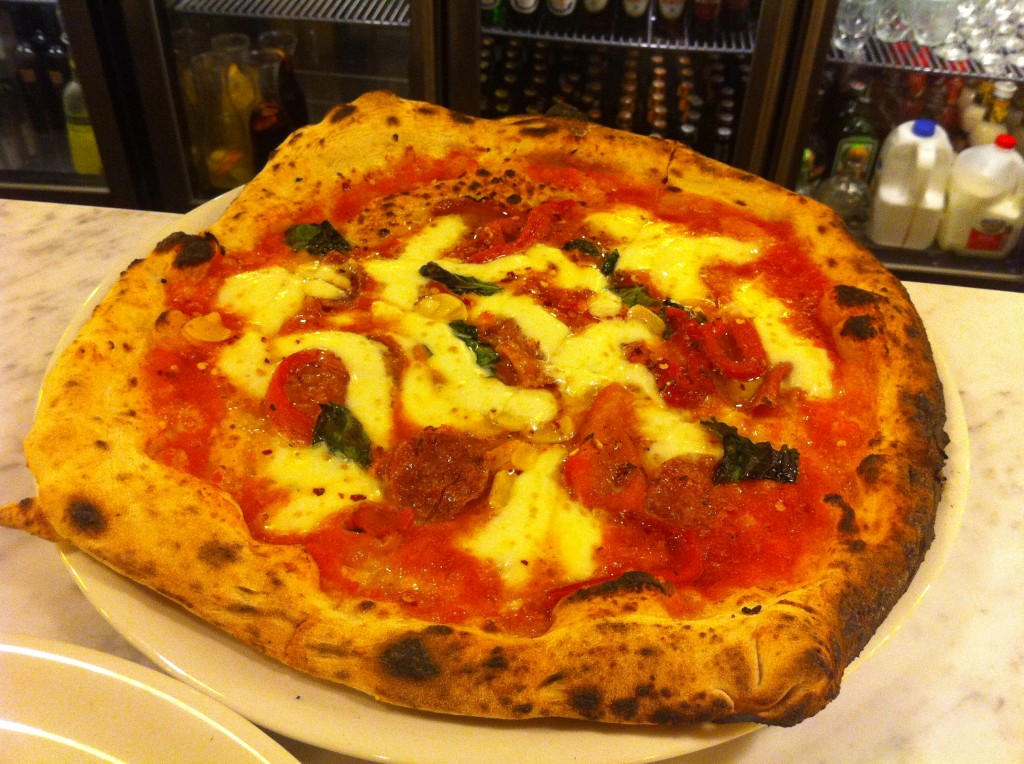 Well hello, Diavola! This spicy devil blew our socks off with just the right amount of Finnochiona (peppered salame) which oozed a firey fat that ever so gently blanketed the roasted red bell peppers, slices of garlic and mozzarella cheese so that those other ingredients still got their day in the sun but were made better by the addition of the melted pork fat. I mean, what isn’t?

Both pizzas were very good, but there was some inconsistency in the thickness of the dough in places- one had a thicker edge and a paper thin middle; the other was doughier all around- but it seems, from the six or seven men (where my ladies at?) crowded around the massive pizza oven- that the staff is still in training. I have faith that they’ll get it right- after all, Settebello is one of the first U.S. restaurants to be recognized by the Vera Pizza Napoletana, established to protect the integrity and defend the origin of the pizza-making tradition as it began in Napoli over 200 years ago. So they kind of have to get it right.

Settebello also has a nice list of Italian wines plus a full bar. I love how the liquor 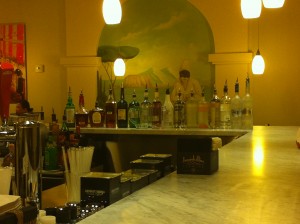 bottles are placed on top of the bar, just like in many parts of Europe. It gives the restaurant a nice homey feel. Plus I can just grab a bottle and serve myself, although I’m guessing that would be frowned upon. Well, they still look nice.

Just as we were polishing off our last drop of Falanghina, we spied a certain Pulitzer Prize-winning L.A. food critic walk in with his family. I’m curious to read what he thought about the pizza.

Settebello is one reason why I feel my faith in Pasadena can be restored, at least, in part. It’s a fantastic addition to the neighborhood and I’m sure it will become a regular place for us due to the good food, wine and reasonable prices. Oh- and
we crave pizza at least twice a week and we have someplace to actually fill that need now without feeling too guilty about it. It would be nice if management would dim the lights for dinner service- a couple next to us overhead us talking about how bright it was and agreed that they felt like they were in a dressing room. Let’s face it, it’s hard to look at your significant other in the eye while drinking a nice glass of wine, dining on some pretty amazing artisan pizza while the glare of a thousand suns beams overhead. Just sayin’.