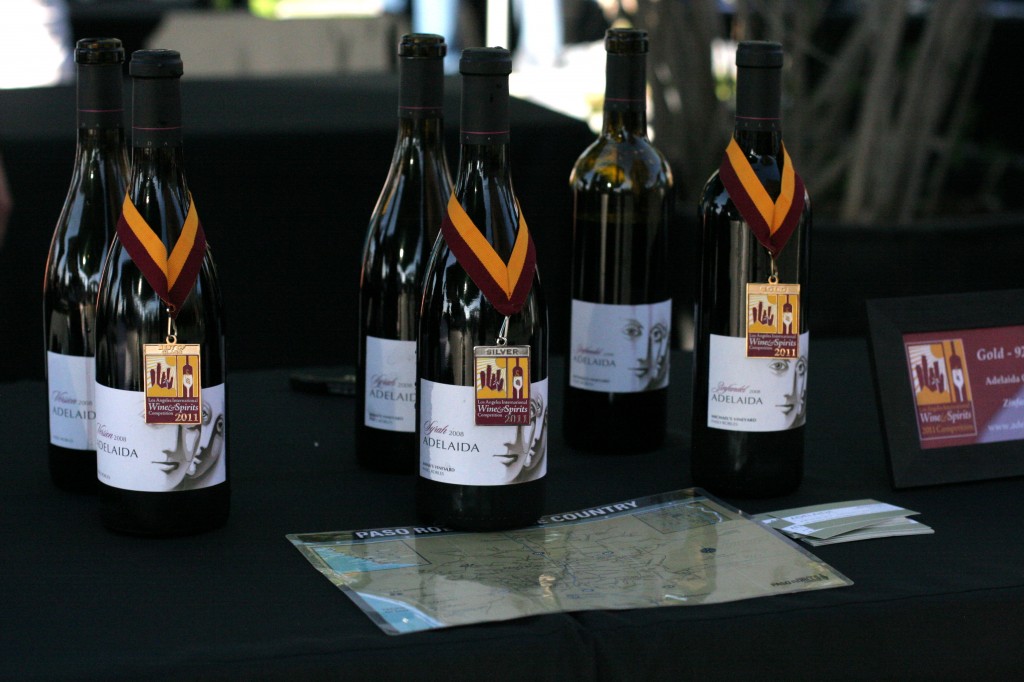 Having spent the majority of my ___ years here in Southern California, I suppose it seems strange that I’ve never attended the Pomona Fair. I’ve never been to the Orange County Fair either, nor any other fair, for that matter. I do recall attending carnivals and similar events as a kid but I don’t think my family ever made the short trip to Pomona for the yearly fiesta. Just think of all the fried Kool-Aid I’ve missed out on over the years!

So- when I was invited to the Pomona Fairplex: FUN Decanted press junket, I figured it was finally my chance to go to the fair. Did it help that the event focused on wine? Long-time readers of this blog- all two of you- know I like my wine, so of course it just seemed like the perfect reason to check it out. Since J had band rehearsal, I decided to take my partner-in-crime, the oft-mentioned, mayonnaise loving Miss M. 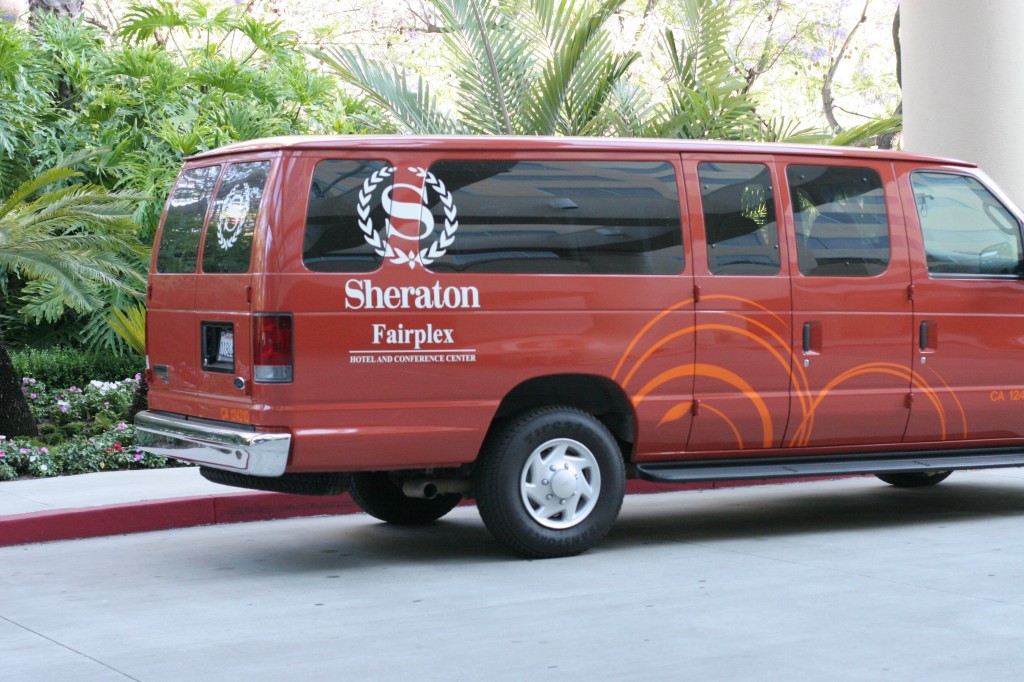 We checked into the Sheraton Fairplex Saturday afternoon, and were pleased to see a beautiful double room which was more like a junior suite since it had a separate living area and a bedroom. Although the room was part of the press junket and therefore comped, I will say I’ve been a fan of the Sheraton chain for a long time. Having traveled extensively and obsessing over hotels while booking any trip (it’s a sickness, but I HAVE to know it’s going to be nice!) I’ve stayed at enough Sheratons to know it’s a hotel I can count on for super comfy beds (the famous Sweet Sleeper Bed which I have in my own home) and consistently good service. The Pomona branch was no different- the front desk staff offered courteous and helpful hints on nearby attractions and the pool/jacuzzi area was clean, peaceful and relaxing.

Later that evening we were shuttled to “FUN Decanted: Wine, Spirits, Beer & Food Trucks” where we could try a number of award-winning libations from the L.A. International Wine & Spirits Competition while noshing on eats from seven different food trucks. M and I grabbed our large wine glasses, got the food truck “bucks” and set out to sample out hearts out.

We immediately saw the Grilled Cheese Truck and decided that we’d eat there first since neither one of us had ever had the patience to wait in the perpetually long lines that this particular food truck always seems to draw. Luckily, we got to the event early and the wait wasn’t too bad, so we took our spots, drooled over the menu and decided on The Signature: A grilled cheese made of macaroni and cheese, braised BBQ’d short ribs, caramelized onions and sharp cheddar: 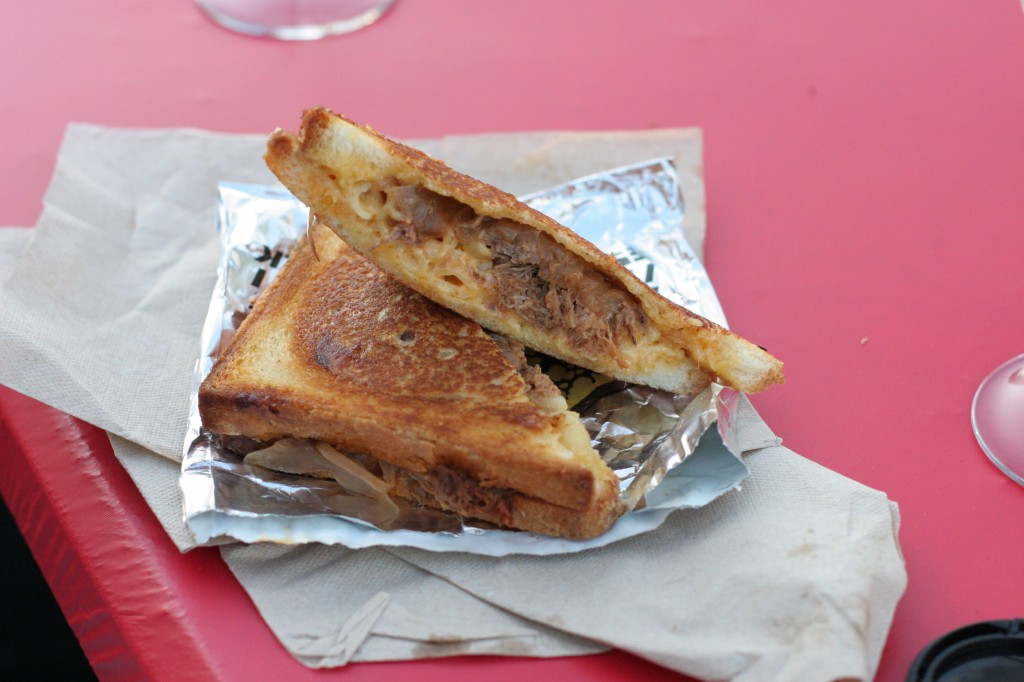 It sounds like too much of a good thing, but it’s actually just enough of all things good that it’s perfect (wait….huh?). We were wise enough to share one sandwich since we wanted to save room for other goodies, and my half tasted pretty much like heaven. I’m guessing M’s half was equally good:).

Ever since Kogi started the entire food truck craze with their Mexican/Korean tacos and burritos, imitators have popped up everywhere. It’s a great idea to fuse the two cuisines, so I can see why it’s so popular. We got a chance to try a Korean beef BBQ quesadilla from the Calbi truck, and although it doesn’t look very glamourous, it was full of flavor. I personally would have loved a bit of cilantro in it, but M thinks the delicious green herb is the devil’s spawn so we were lucky that it didn’t come with any. At least she was! 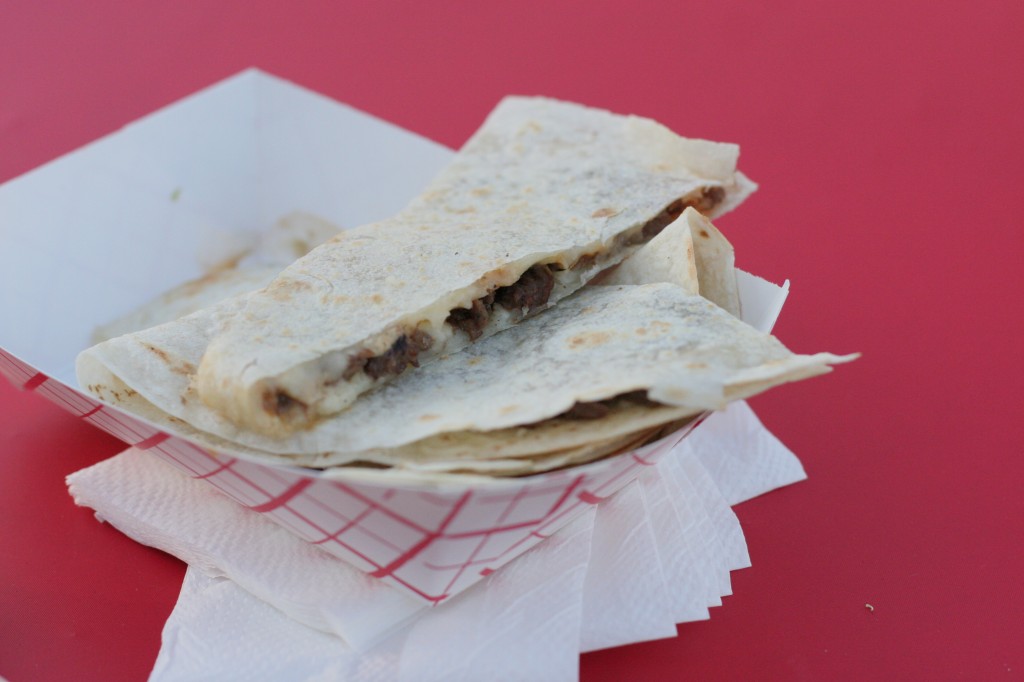 Before, during and after our meals we tasted many wines from many regions. M discovered a newfound love of riesling, while I fell hard for this incredible Triple Cream Sherry- the ONLY thing made by Rancho de Philo Vineyards & Winery: 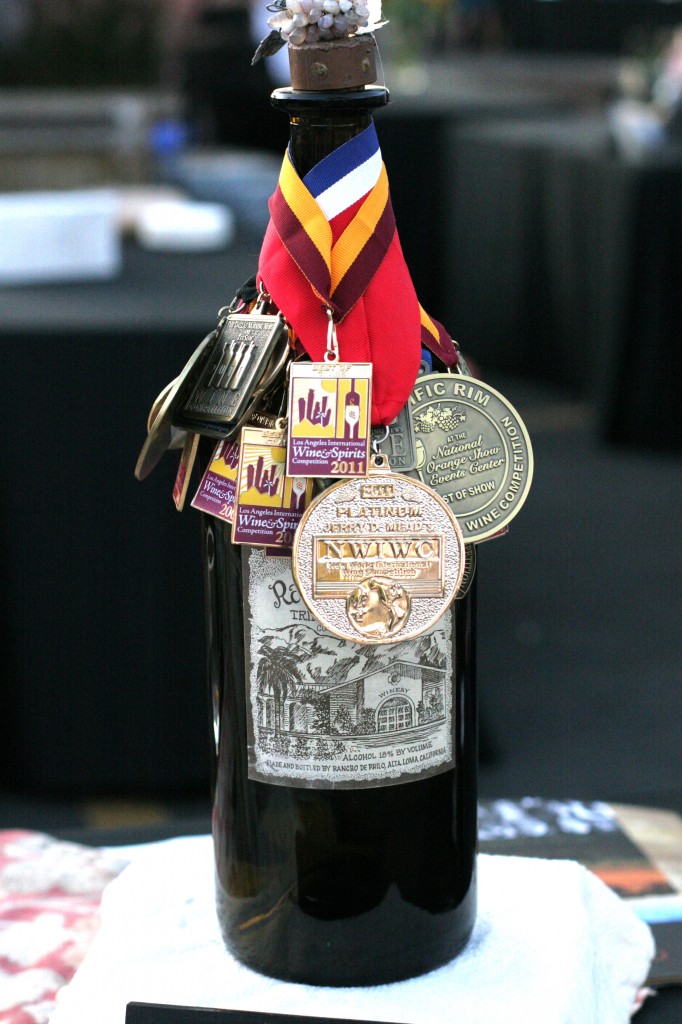 As you can see, I’m not the only one crazy about this stuff. I’m no sherry expert so I can only say it tasted like brown sugar with hints of fig jam, and I just couldn’t get enough of it’s unique and warm flavor. They only sell it once a year- the second Saturday of November- and sell out in one week, so I put my name on the mailing list and hope to get a bottle (or three) later this year. Wish me luck! 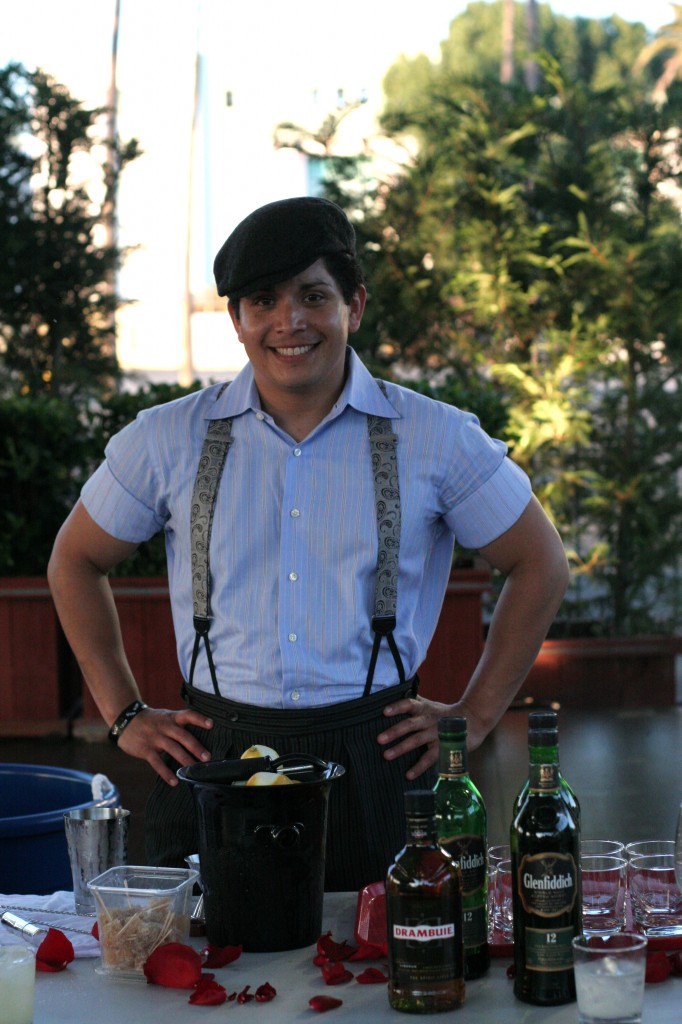 The other drink that really stuck with me was Solerno Blood Orange Liqueur from Sicily. My parents have a blood orange tree so I’ve grown up eating the bright, red citrus but had never had a liqueur which so well-embodied the flavor of the actual fruit. I loved the reamer design at the bottom of the bottle as well. 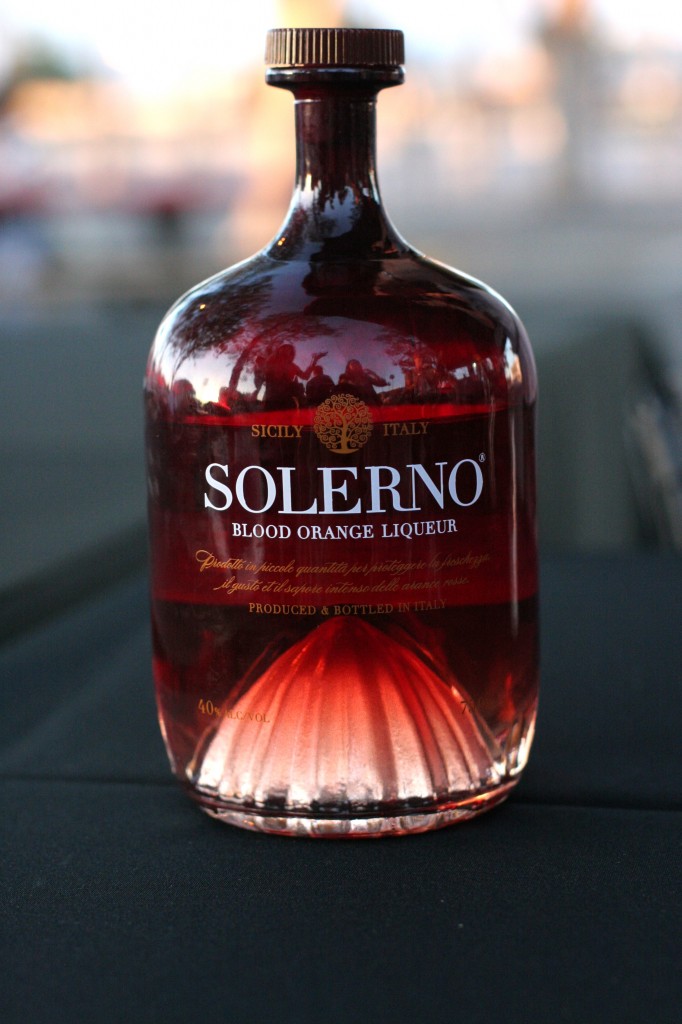 The next morning, we took a tour of the Sheraton Fairplex Conference Center, which will open in late fall of this year. We saw some images of what the center would look like upon completion, then went to the site to get a closer look. As you can see, it’s still a work in progress, but once built, the center will boast nearly 40,000 square feet of meeting room space and be a LEED (Leadership in Energy and Environmental Design) Certified Facility. 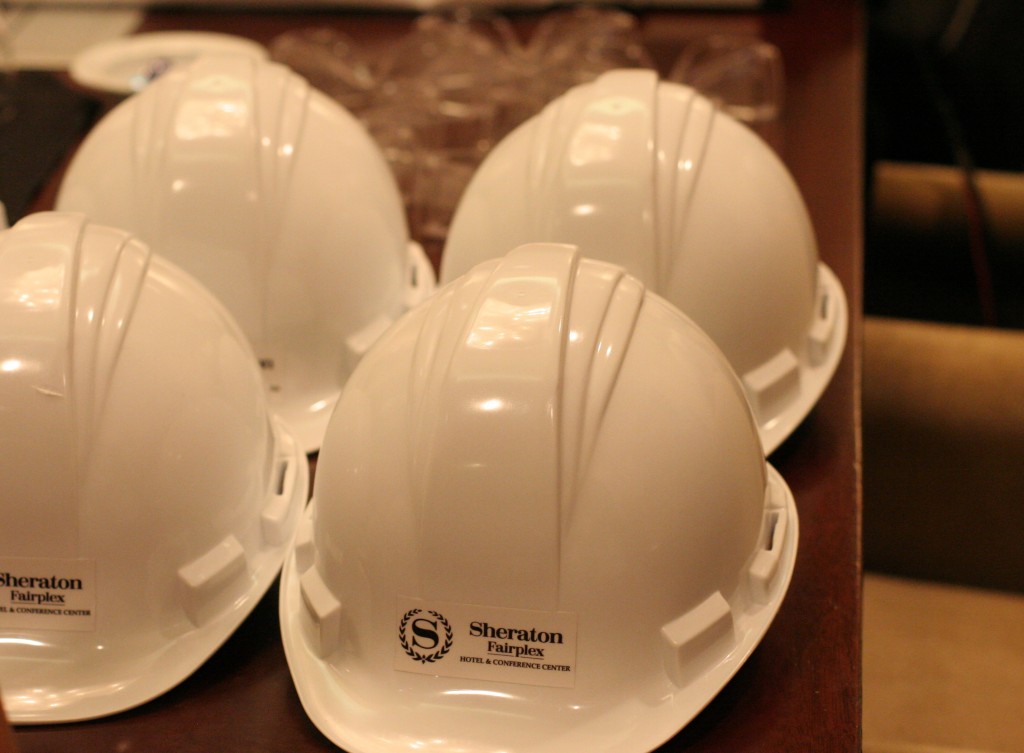 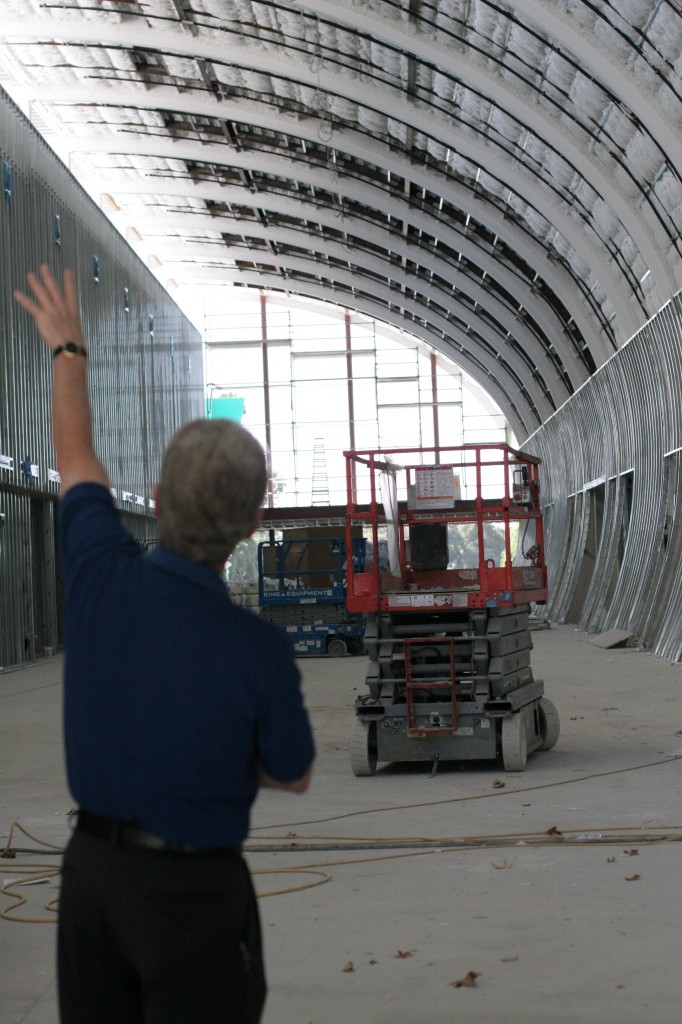 We took a shuttle from the tour to the part of the press junket I was most excited about: a farm champagne brunch created by Sheraton’s Executive Chef David Teig. Instead of the usual “farm-to-table” approach, our guide joked that this was a “table-to-farm” brunch since our table was actually brought to the farm where we’d eat a number of dishes created from produce we could see from the table. It was a cool concept, and one that is available for special events. 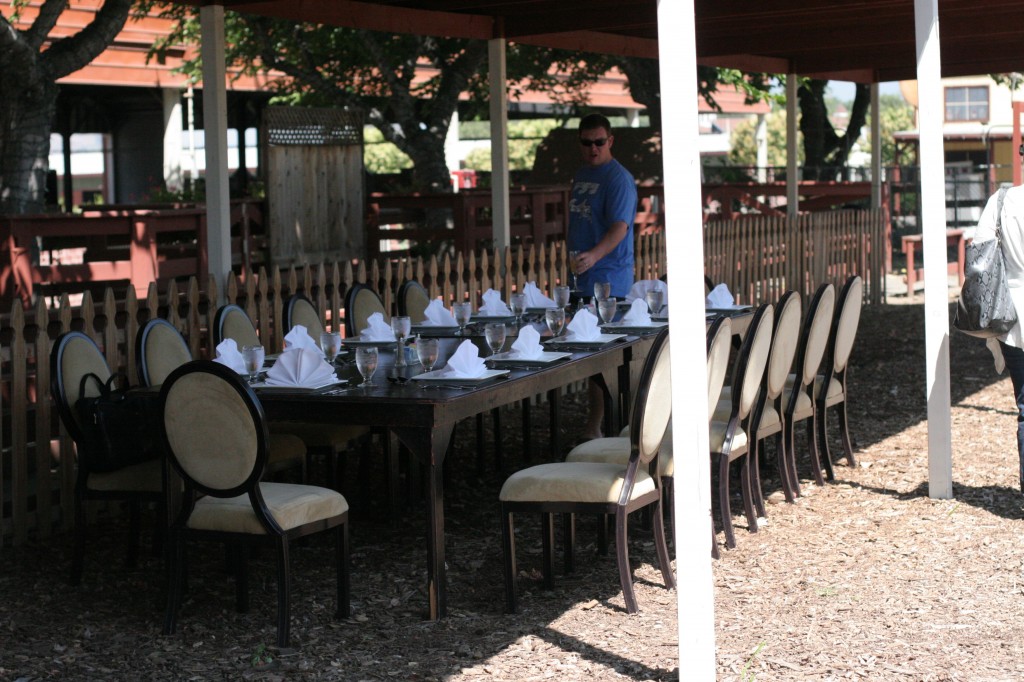 The 90-minute meal was filled with a cornucopia (I normally don’t use that word, but in a garden it seems appropriate, no?!) of produce and meats from the farm. 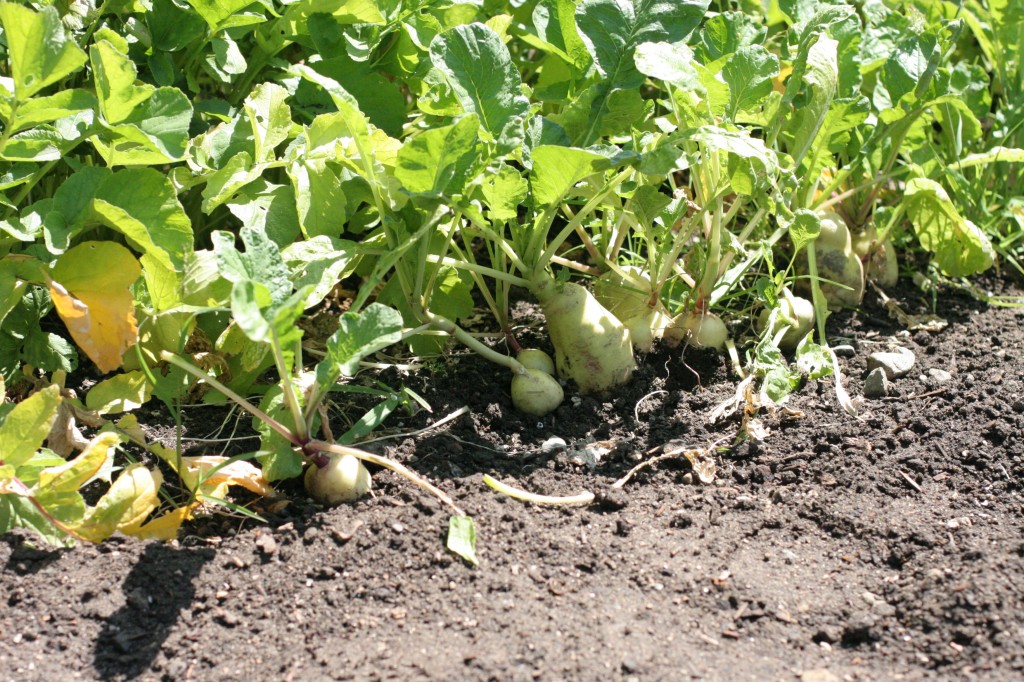 We started off with a quick stop at a makeshift bar, complete with everything you need to get your brunch started off right: 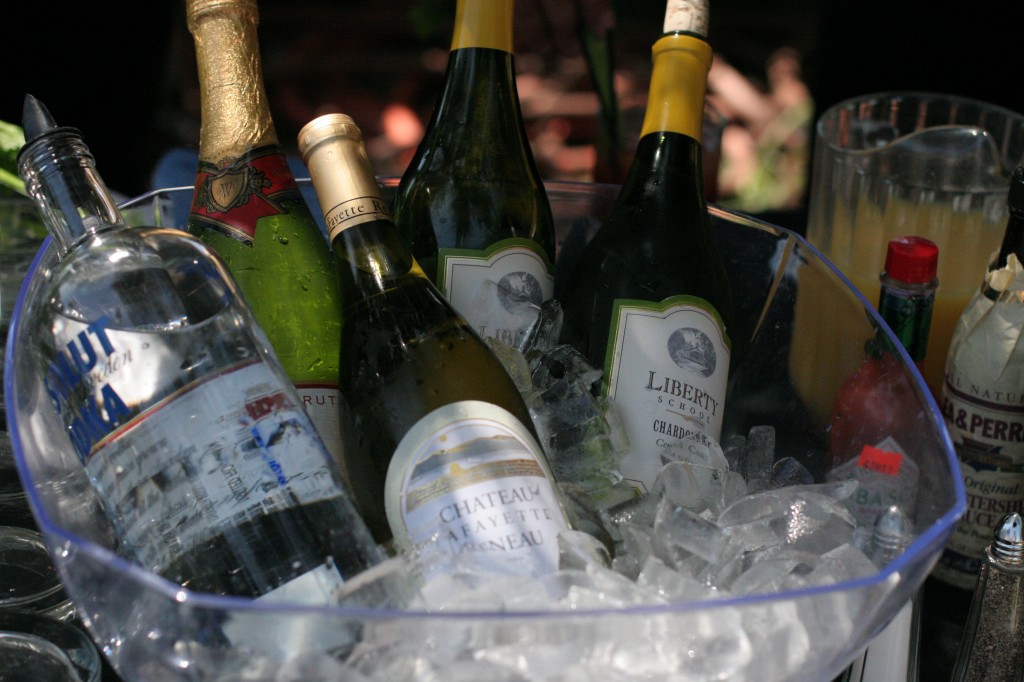 M and I went for the mimosa since it was made with freshly squeeze orange juice:

Next we were given a choice of freshly pureed nectar. I had the pink one, which was prickly pear. Sweet and refreshing, the flavor reminded me of the Hello Kitty candy I used to eat as a kid (that’s a good thing, by the way!) 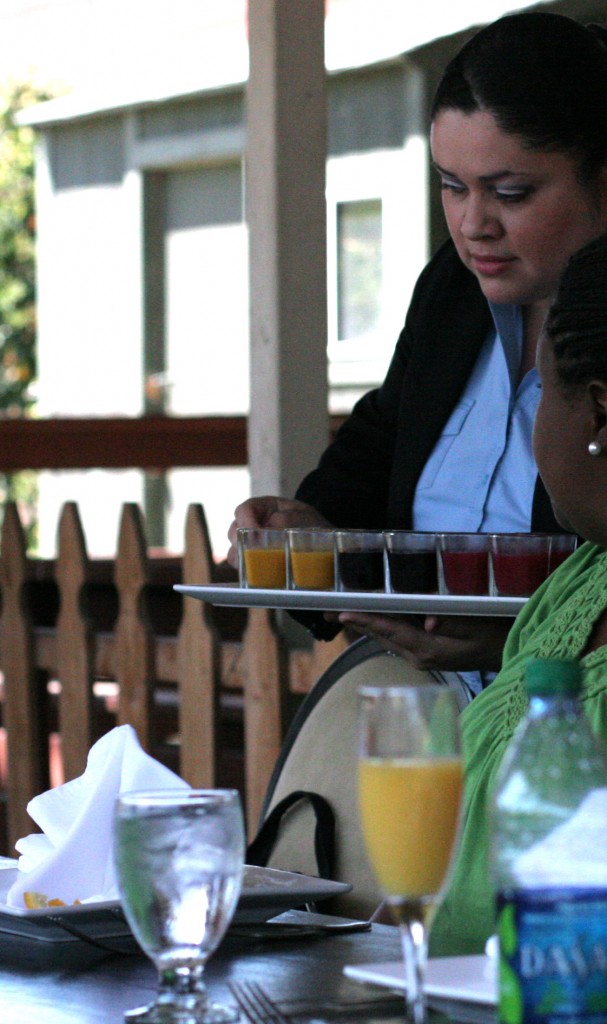 Next up: a salad of pink grapefruit garnished with ribbons of chocolate mint. We plucked a leaf of this mint while walking through the garden and you could really taste hints of chocolate. 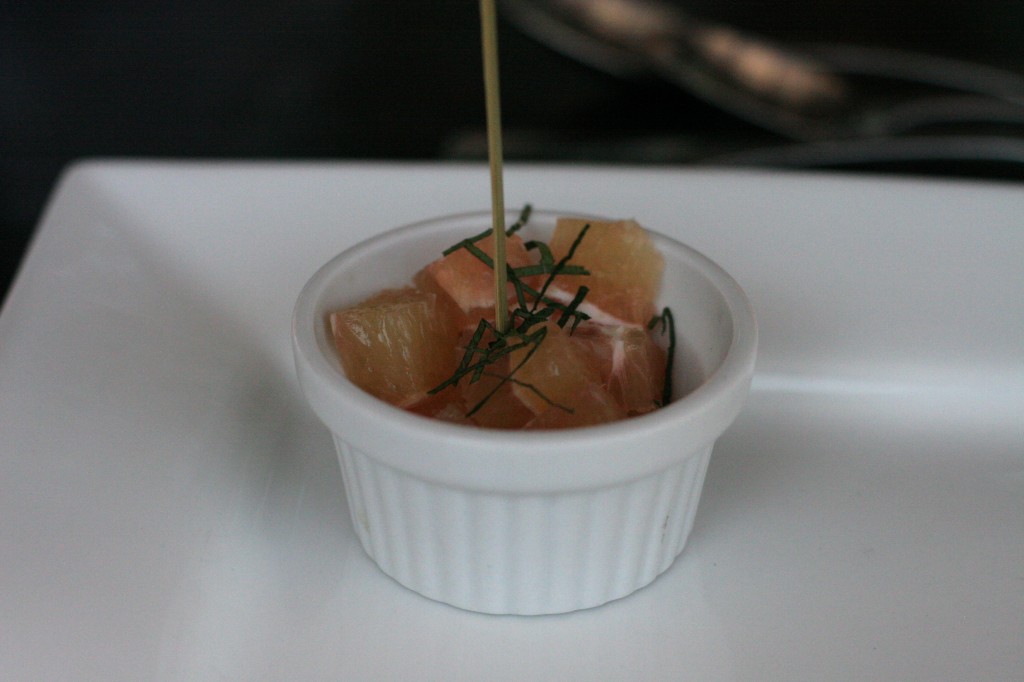 A basket of warm croissants is a way to a girl’s heart (well, mine anyway!) 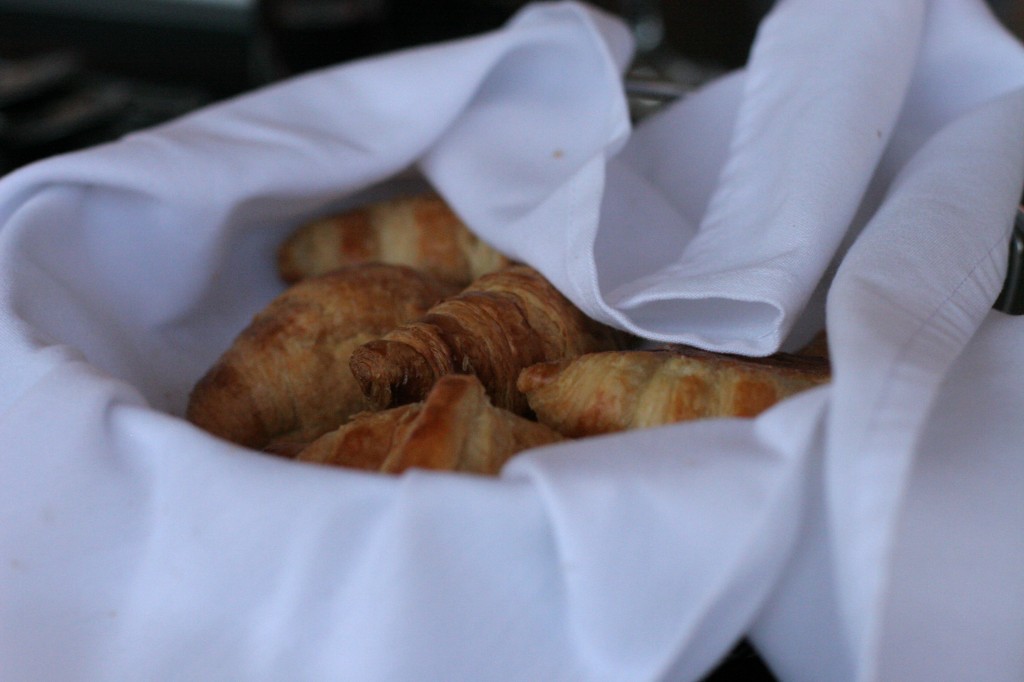 …which I used to dip into this coddled egg, runny and golden and studded with spanish chorizo: 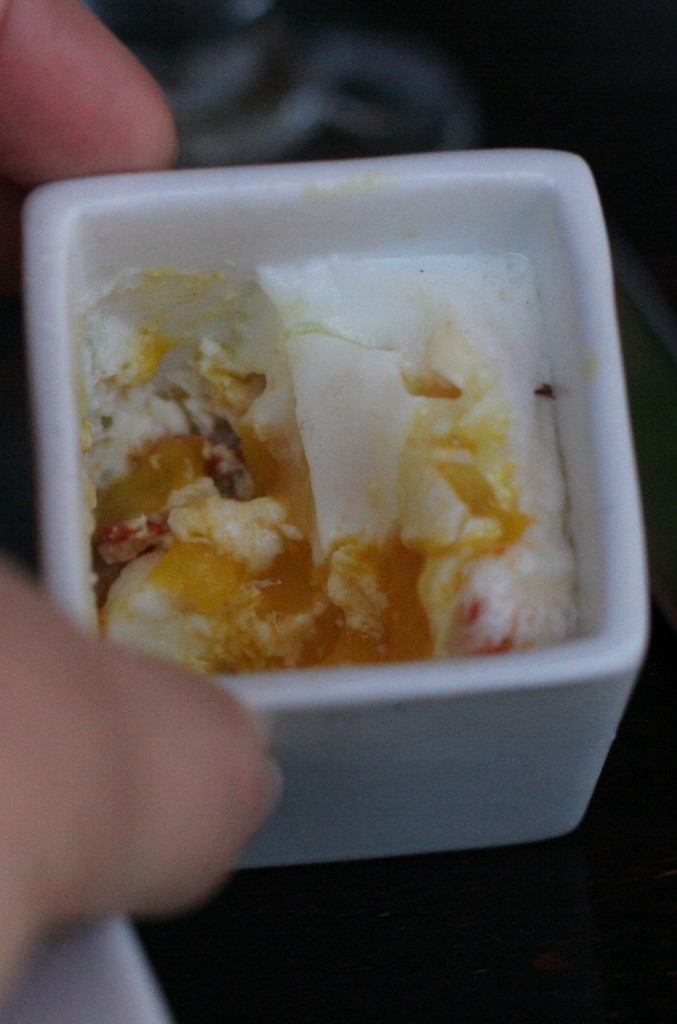 Grilled sea bass with Chef Teig’s homemade fennel salt. I normally don’t like the licorice flavor of fennel but this was mild and went so well with the fish I truly enjoyed it: 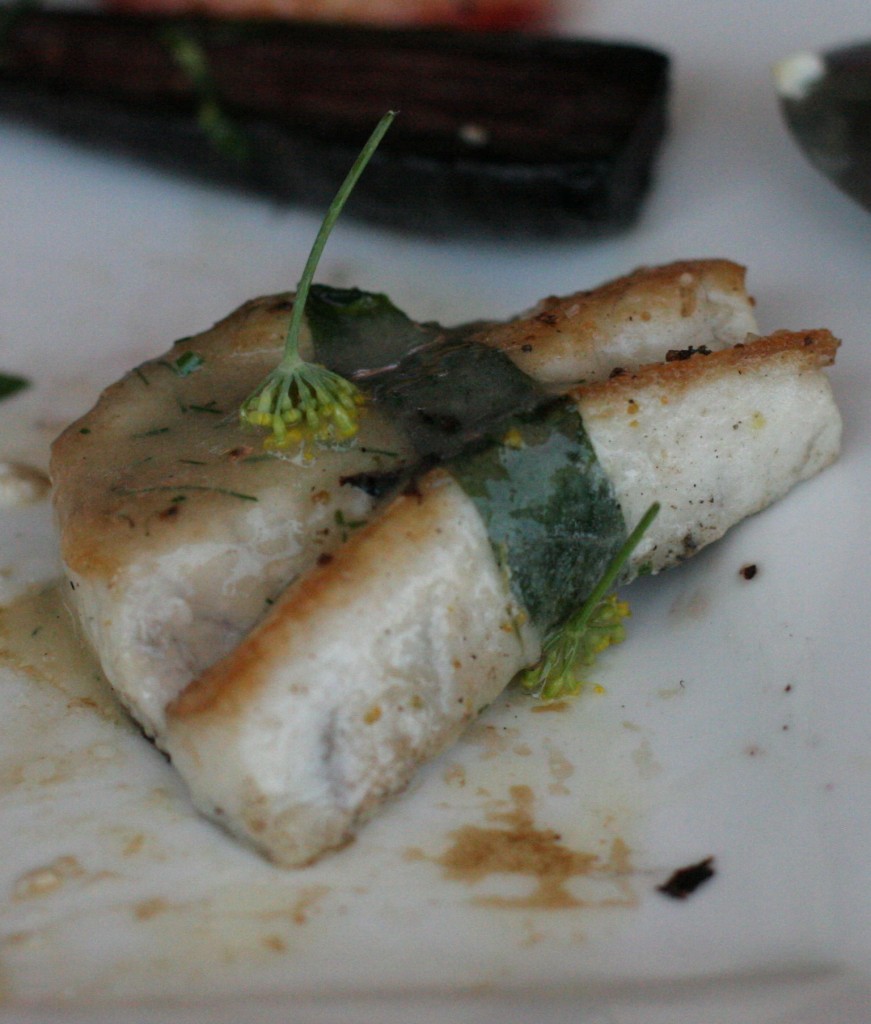 Braised pork belly topped with pickled red cabbage- will you look at the size of that? Each hunk was topped off with a sprig of thyme and was melt-in-your-mouth tender. I especially enjoyed the pickled red cabbage which cut through the richness of the meat very nicely. 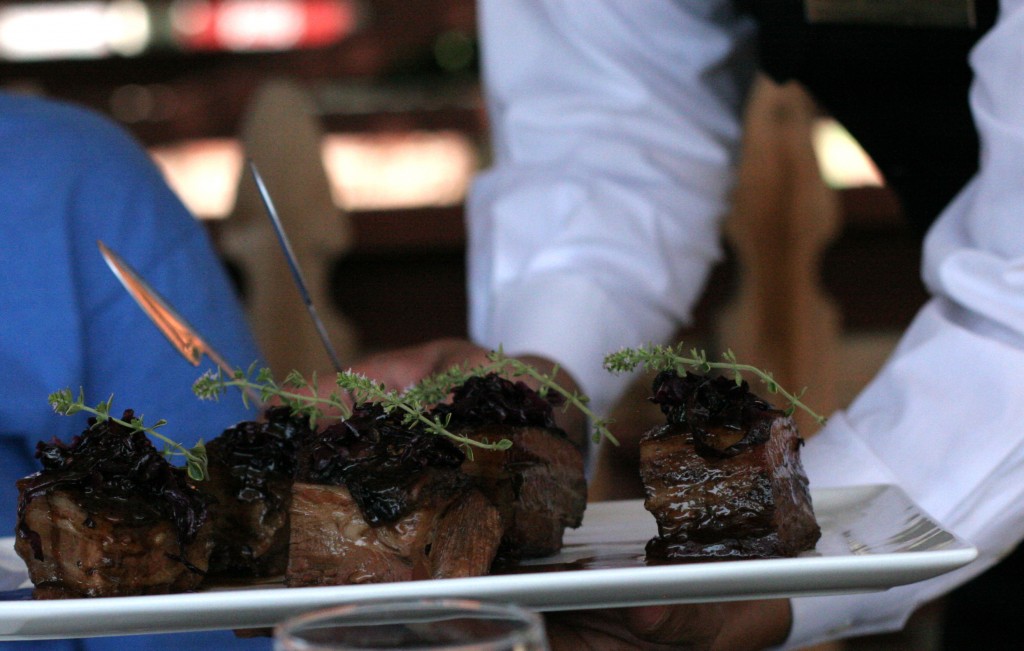 Grilled figs and oxtail stew. I have to admit, I’ve never been a huge fan of figs, and after eating about half of my pork belly the oxtail wasn’t the thing I was craving, but after one taste I couldn’t resist the deep, rich flavor of the stew. 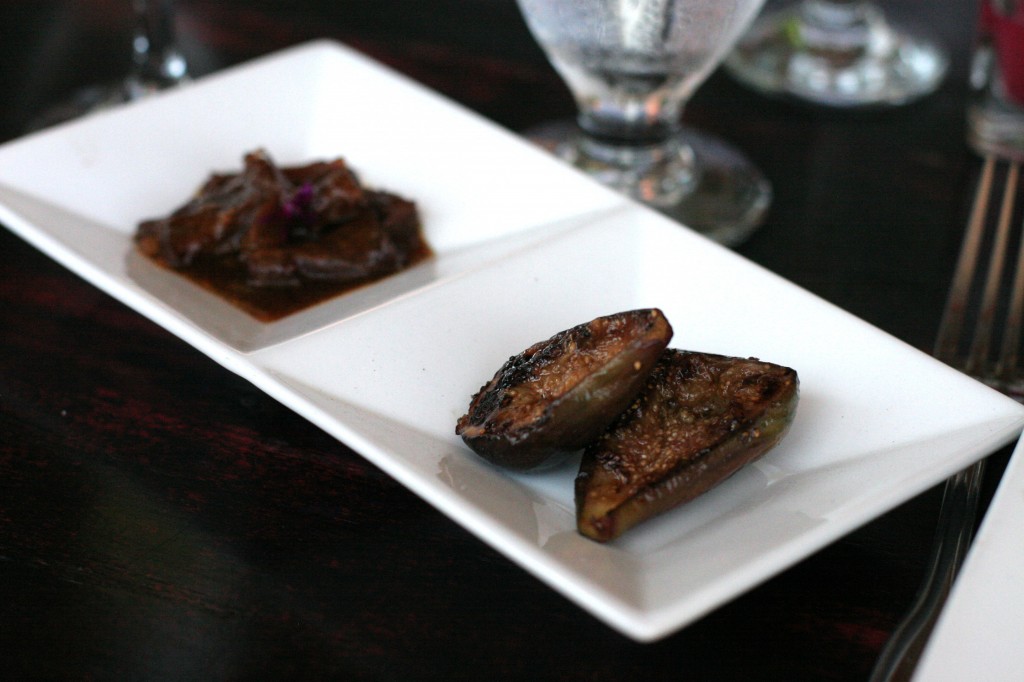 Peach crumble: I loved that this dessert showcased the peach, which was tender but firm and incredibly sweet: 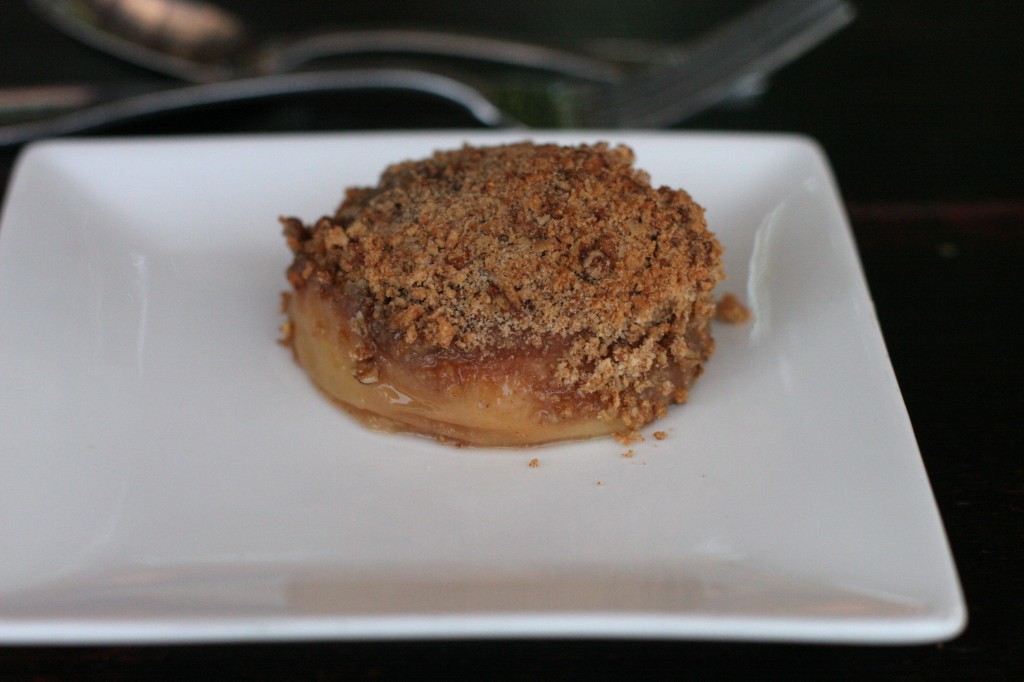 …and it was served by the biggest surprise of the morning- homemade banana ice cream topped with orange-infused olive oil, garnished with sea salt. I’ve had gelato drizzled with olive oil and it was good, but this was spectacular. Everything married so well together, and my tongue would jump from tasting the salt to the bright citrus to the creamy banana…it was really a pleasant surprise. 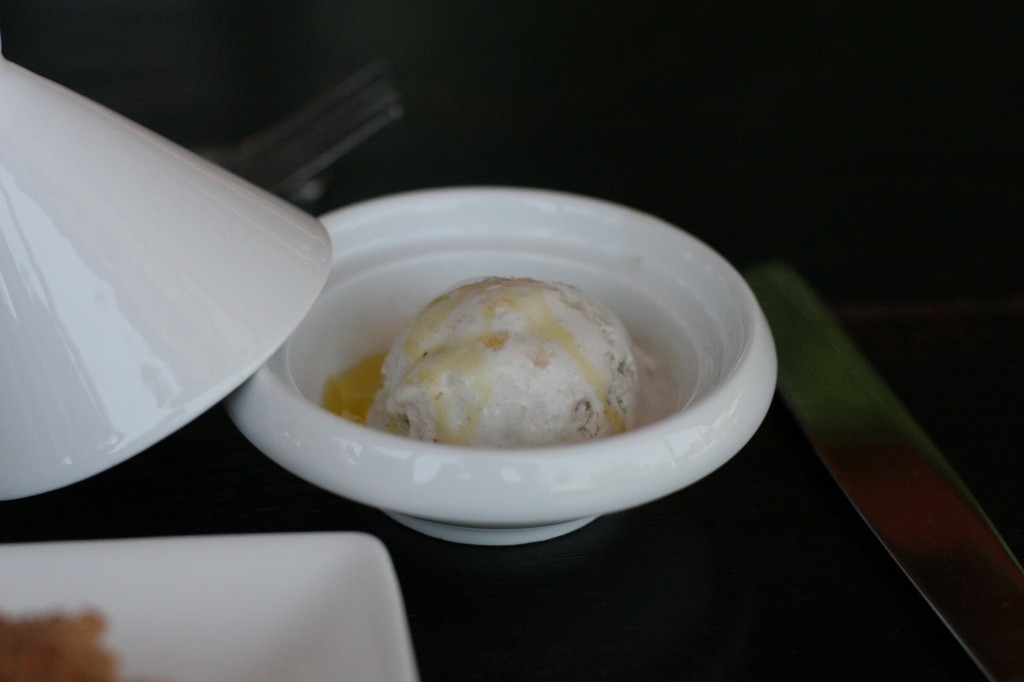 After the meal, we strolled through the garden and just took in all its beauty: 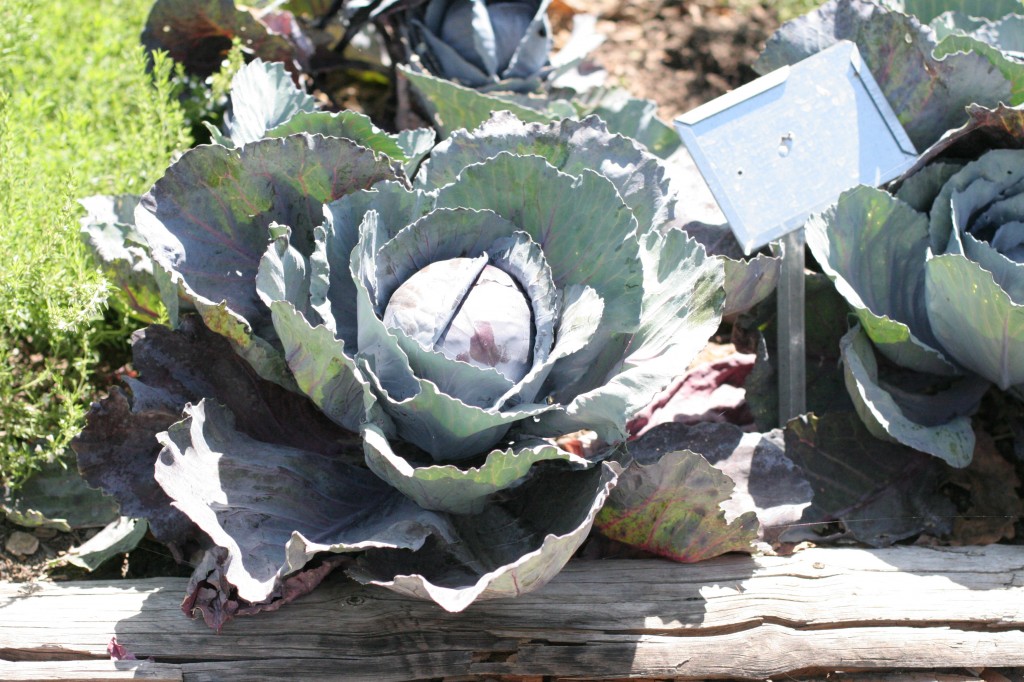 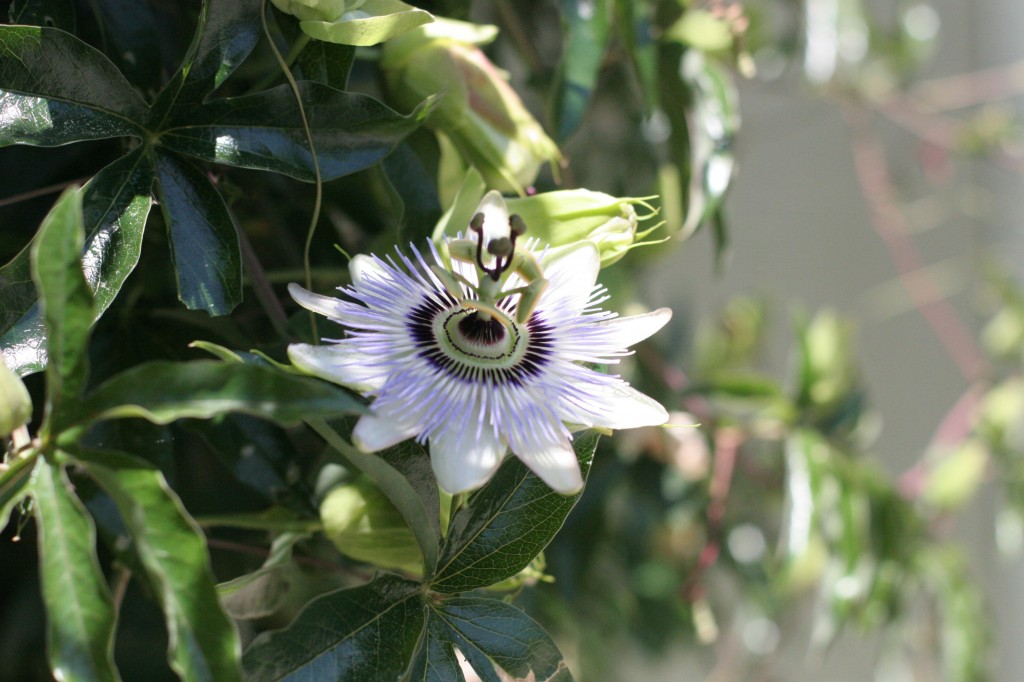 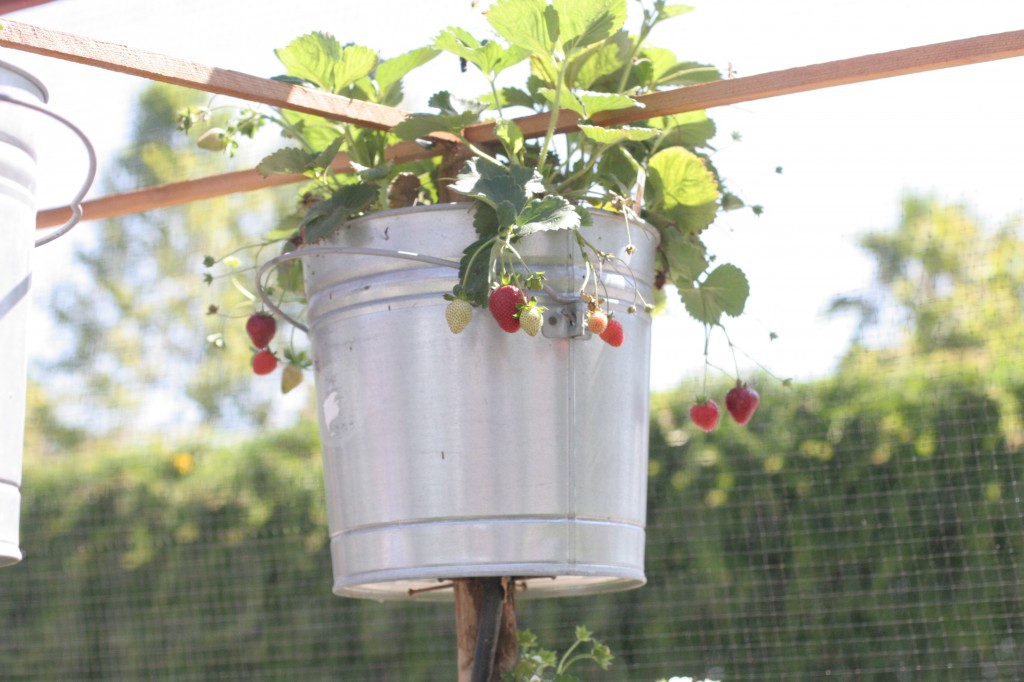 It was quite impressive, and everything was carefully, thoughtfully and creatively prepared by Chef Teig who was coerced by the Sheraton staff to move from New York to California. As with many former East Coast chefs, he has a great appreciation for the abundance of year-round produce California has to offer, and he said his garden is like his playground. His playfulness and respect for the ingredients really came through in his dishes, and I felt quite lucky to have gotten a chance to experience his cuisine first hand.

With full bellies, M and I reluctantly checked out of the hotel and made our way back home, armed with a gift basket which included a bottle of Chef Teig’s homemade fennel salt which is now in my playground- my kitchen! We had an amazing time seeing and tasting what the Fairplex had to offer, and although I’d never thought of it before, I may just include Pomona on my list of “staycation” destinations.