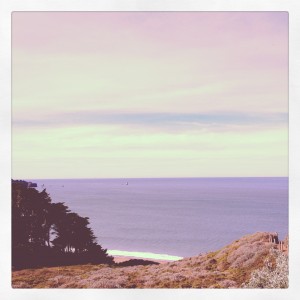 Here’s the second and final part of our 10 year anniversary trip to San Francisco. We spent the better part of 3.5 days eating our way through the city (and beyond- yes, I know Chez Panisse is in Berkeley!) and had an absolute blast. I covered half of our San Francisco culinary adventures in the last post; here is the rest.

We’d decided long ago that we would toast our 10th anniversary at what J calls, “My favorite restaurant in the United States,” Bar Crudo. Crudo is the Italian version of sashimi, and Bar Crudo offers creative ways to eat raw seafood- one of J’s favorite things in life. It’s nice to go to a restaurant that has so many healthy options too! We got dressed and got ready to head out, but not before a champagne toast on the balcony of our rental: 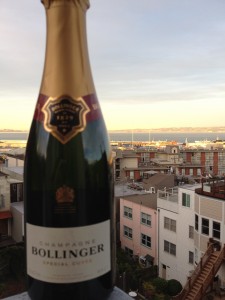 How photoshopped does this look?! Cheers to 10 years:)

We arrived at Bar Crudo to even more bubbly- my sister and her (now) fiance called the restaurant and purchased a bottle of champagne for us- how awesome was that?!  Here’s what we ate: 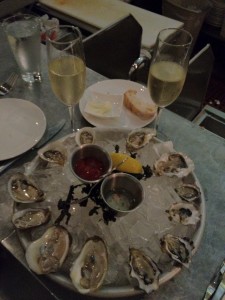 Oysters, with aforementioned champagne, thanks to Clare and Cormac!

We also had this sampler of crudo, which included artic char with horseradish creme and tobiko, yellowtail tuna with shishito aoili, capers; ono with avocado, rhubarb and jalapeno relish, micro cilantro; and local halibut with coconut milk, grapefruit, cara cara oranges, chilis, piri piri peppers. The plate in the back is something we always order at Bar Crudo: the uni avocado toast with sudachi and frisee salad. It’s one of my favorite things there. 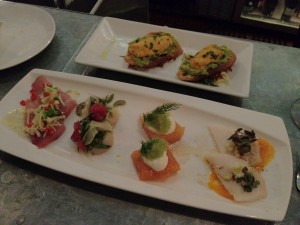 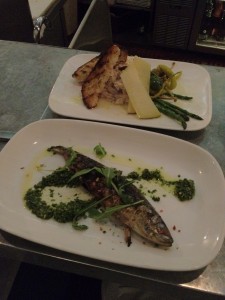 The next morning, I sought out the whole wheat croissant at La Boulange, a chain of bakeries in the Bay Area. Now, I know some of you foodie types are thinking, “Why didn’t you just go to Tartine?” but A) I’ve been to Tartine twice before and loved it B) So I wanted to try something new and C) I just didn’t feel like waiting 45 minutes in line. Also, when my sis said “whole wheat croissant” I just had to try it, because I actually tend to like whole grain or whole wheat versions of bread more than white, and I love croissants more than any other kind of bread/pastry/carb. We arrived to see a beautiful display of goodies: 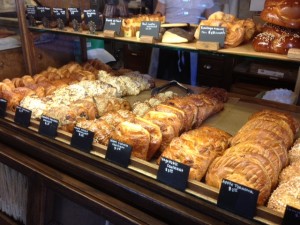 J decided to order the granola, but I was a mission and ordered these two, sesame-covered beauties: 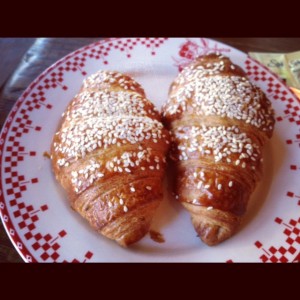 They were as flaky and buttery as any croissant I’d ever had- after all, they use whole wheat flour but still make them with the same technique and the same amount of buttah! I loved the slight nuttiness from the whole wheat, and thought the toasted sesame seeds added a nice crunch. J, on the other hand, said he preferred the white version and happily noshed on his bowl of granola.

As I’d mentioned in my previous post, our friend Jen was kind enough to lend us her car for the entire weekend, so J suggested we drive to Berkeley to have lunch at the legendary Chez Panisse. Of course we took a stroll on the Golden Gate beforehand to burn off some of those croissant calories: 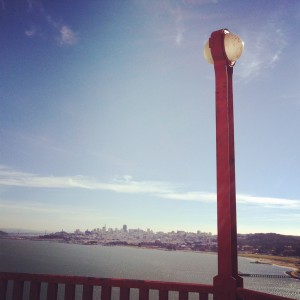 We arrived in Berkeley just in time to make our 1:45pm lunch reservation. Chez Panisse was as charming as I’d hoped- we went upstairs to the cafe since the restaurant downstairs isn’t open for lunch. We were seated right next to large windows so we had a view of the tress and cute shops below. As expected, the menu was filled with fresh and seasonal dishes. We both knew we had to order at least one salad, because when I tweeted Pulizter Prize-winning food critic Jonathan Gold about what to eat at Chez Panisse, he tweeted back, “a salad.” I wasn’t going to ignore that piece of advice! The menu changes daily, so you’re always getting the best of that particular day. I started with the sole and leek terrine served with a salad of chicories: 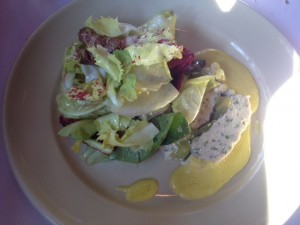 Sorry for the blurry photo! The terrine was light, airy and studded with fresh herbs; the salad was so pretty- each leaf looked like a watercolor painting. It was really the perfect way to start a meal.

J got the beet and romanesco salad served with sauce gribiche: 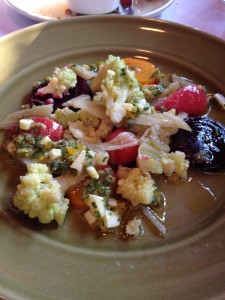 Looks are very deceiving, let me tell you. This appears to be a plate of beautiful beets, romanesco and sauce but it was really the kind of dish that makes you take a bite, then stop, look wide-eyed at your dining partner with an expression like “WHAT is this, it’s too good!” That’s pretty much what J did after every single bite, and I knew then why Jonathan Gold told us to order a salad. 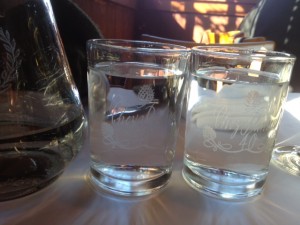 We shared our two entrees since we wanted to try as many things as possible.  Here is the handmade rigatoni with wild mushrooms and peas: 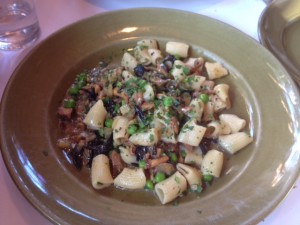 It was seasoned with thyme, parsley and other fresh herbs, and I loved that the ratio of mushrooms to pasta was 1:1, so we didn’t fill up. At Chez Panisse, the produce is the star.

The second entree we ordered was the Watson Ranch milk-fed lamb cooked in the wood oven, served with crisp potato strings and turnips: 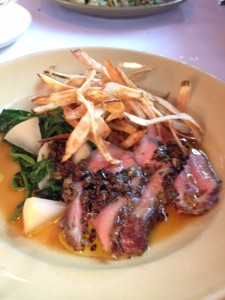 We liked this dish very much, but have to admit the very small portion of lamb (it’s hard to tell by this photo but the slices were paper thin) was a bit on the chewy side; everything else on the plate was delicious.

We never order dessert at lunchtime, but hey- this is our 10th anniversary trip we’re talking about- so of course we did! It was a good move, because we ended up having what ended up being one of our favorite dishes of the meal. This buttermilk panna cotta with kumquat marmalade and a homemade biscotti was light, creamy, tart and sweet; ALL of the components went together so beautifully. We kept trying to scoop up the barely-set panna cotta and a dollop of marmalade onto the biscotti for the perfect bite.

We also got the Pink Lady apple galette with a scoop of ice cream: 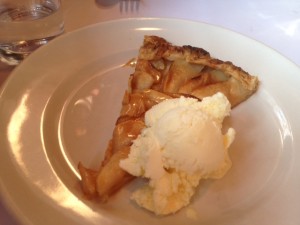 This was light and delicious, but no match for the panna cotta!

Our server was so nice, and we had such a long and relaxing lunch. The only slight “complaint” I have is that Chez Panisse tacks on an automatic 17% gratuity. Just beware- if you dine there, you do not need to write in a tip. Take it from someone who learned the hard way!!

We did dine at a couple of other restaurants- Anchor & Hope, which we liked very much but was too dark to take any photos (and I felt like taking a photo break!), and Flour + Water, arguably one of the city’s hardest tables to get but I managed to score one after explaining that we’d be traveling from Los Angeles to dine there to celebrate our anniversary. I was so excited to eat there, but left very disappointed after getting a waiter who talked in shortened words like “It’s awes! (awesome)” and “That’s so delish!” and also insisted that the pasta at Flour + Water was “the best in the world.” When I asked if he’d like to toss Italy into that, he said “Yes, our pasta is better than anything in Italy.” After that sort of hyperbole, how could you be anything but disappointed? My overcooked pasta was certainly NOT the best I’d ever had; my friend A had more luck with hers but again- it wasn’t life-changing. The guys’ pizzas were just OK. I took photos but decided not to post since it really isn’t worth reliving. Ah well.

That hiccup aside, we ate some of the best food we’ve ever had in the city and enjoyed what became one of our favorite vacations ever. I think this cup of cappuccino from Chez Panisse describes our experience perfectly: 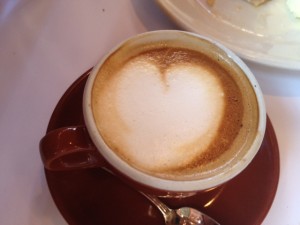 That concludes the San Francisco posts for now….until the next trip, of course!