Wanting to mix things up a bit, I opted to make a trio of sliders- an Asian-inspired salmon slider, a traditional American-style burger and a Greek-style lamb one made with McCall’s Meat and Fish Company’s beautiful lamb Merguez sausage which I simply cut out of the casing and formed into patties. In fact, I got all of my protein at McCall’s since proprietor Nathan always has the freshest, tastiest meat and seafood along with his willingness to answer questions and give helpful advice. It’s a win-win.

For the Asian-style salmon patties, I ground up half of my fatty salmon in my food processor, chopped the other half with my knife and combined the mixture with soy sauce, sesame oil, ginger, garlic, green onions, egg and just enough panko to bind the mixture together.  Some fresh arugula, wasabi mayo and red onions completed the burger. 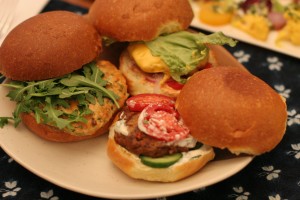 My lamb sliders came together easily since the sausage was already seasoned. I topped each patty with some Persian cucumbers, tomatoes, red onions and a yogurt sauce that had a hint of mint and a lot of cilantro. The American-style burger was simply ground beef patties topped with American cheese, pickles, mustard, ketchup, lettuce and a touch of mayo. 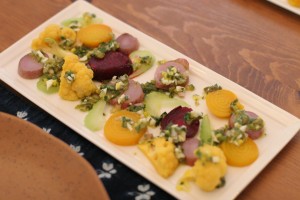 Instead of fries, I tried my best to recreate a dish that absolutely knocked my  socks off during lunch at Chez Panisse a few months back. The plate of slightly warm romesco cauliflower, roasted beets and sauce gribiche made from hard boiled eggs, pickles and capers looked simple but went off like fireworks in my mouth (figuratively speaking, of course). The different textures, temperatures and flavors melded together in such an awesome way I had to try my hand at it and felt it would be a nice, light accompaniment to all of the burgers. Although my version was tasty enough, it lacked the magic of Chez Panisse’s version…but that’s to be expected, I suppose. I’m no Alice Waters!

If anyone does have the recipe for the Chez Panisse version and would like to share- please do!